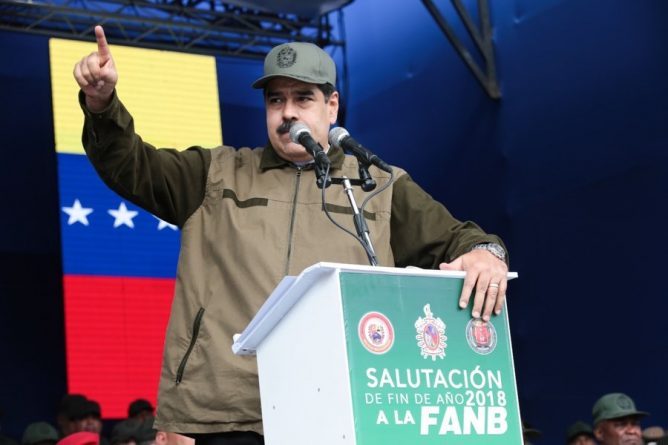 Venezuelan President Nicolás Maduro ordered Friday to strengthen security on the border with Colombia to guarantee peace. This Friday, during the annual salutation to the Bolivarian National Armed Force (FANB) from the Ministry of Defense, the Head of State reiterated his denunciations about the attempts by foreign governments (particularly those of the United States and Colombia) to divide the FANB and attempt a coup in the country.

He pointed out that Venezuela has long been a victim of Colombian violence. “They want to weaken Venezuela, divide it and confrontation to seize our resources. Venezuela will not kneel before any empire, nor any foreign oligarchy! “, He said.

“I have given direct orders to the commanding general of the Bolivarian National Guard to protect the border with Colombia and fight the violence that comes from there,” he said. He also ordered to remain alert to the conspiracies that come from Bogotá and Washington. After pointing out that from Bogota the amount offered to Venezuelan officers has increased to betray the country, Maduro said that “nobody buys the FANB, nobody divides it, nobody weakens it. Maximum alert! Maximum moral! Discipline and conscience, maximum union! “He said.

He insisted that the FANB must be prepared and with the Constitution in hand, deployed, well coordinated and directed. In addition, the people should feel proud of it. The national leader indicated that “we are willing to fight for this land, for these seas, for this people at the cost of our own lives if necessary.” He stressed that they have developed a command for each federal entity with 24 Integral Defense Zones and 99 Integral Defense Areas that are activated with the people and the Armed Forces in case of conflict.

“What we are building does not exist anywhere in the world as are the eight regions of integral defense that are ready to be deployed autonomously, coordinated and thus fight together with the people.”