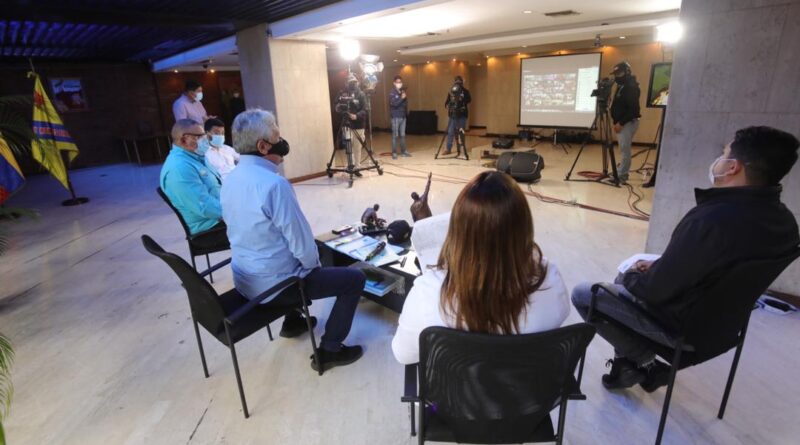 This Wednesday, Venezuelan President, Nicolás Maduro, ordered the creation of a detailed report on the actions that the Venezuelan justice system is taking in the case of the 370 peasants killed by landowners, this after the request of the constituency Braulio Álvarez. In statements broadcast by Venezolana de Televisión, the Venezuelan head of state instructed the minister for Interior Relations, Justice and Peace, Néstor Reverol, in the creation of this report, which must be prepared as soon as possible.

“I need a report, coordinated with Braulio Álvarez, and the entire peasant movement, on the situation of justice in the case of these 370 martyrs, who have been assassinated by landowners, by assassins. We need justice to be done. I need a detailed report on how the investigation processes are going, on how the justice processes are going,” said the national President, during a videoconference with the peasant sector.

From Miraflores Palace in Caracas, the Venezuelan president requested, in addition, that in the face of criminal actions, the capacities for the defense of the homeland peasants be strengthened. “We have to reinforce all the defense, protection and reaction capacity measures of the Venezuelan peasants against these murderers,” he said.

In 2017, the Committee of Relatives of Victims of the Peasant Sicariate urged the National Constituent Assembly (ANC) to declare hate killings as crimes against humanity. In addition, it advocated that justice be done for the events recorded in recent years, where more than 300 leaders have lost their lives for raising their voices against the large estates, especially in the states of Zulia, Barinas, Apure and Portuguesa.

On Wednesday, Maduro also instructed the Minister for Defense, Vladimir Padrino López, and the commander of the Strategic Operational Command of the Bolivarian National Armed Forces (CEOFANB), Remigio Ceballos, to design new strategies for the protection of the peasant people.

He indicated that the Bolivarian National Armed Force (FANB) must be part of the people and of the productive apparatus of the country. “We are going to protect the people, to defend the people,” said the national President.

On repeated occasions, President Nicolás Maduro affirmed the importance of working the land and the field to overcome the economic situation in the country, as a result of the Covid-19 coronavirus pandemic.

Maduro order the incorporation of seeds and land as new vertices in the AgroVenezuela Mission
Maduro also ordered the incorporation of two new vertices to the Great AgroVenezuela Mission to strengthen the land and seed banks. After listening to the recommendations by videoconference of farmers and growers of Barinas state, the head of state instructed the minister Wilmar Castro to define a new vertex for the seeds and another one for the land. “They are key issues, but in the structure I don’t see these issues clearly, and things have to be clear. The vertices are the motors and the columns. Seed is a new vertex from now on, you put it there (Castro),” said Maduro.

With regard to land, the president pointed out that the other new aspect must address legalization, regularization and productivity, while he aimed to reconfigure the concepts based on the nine cornerstones of the mission.

Maduro emphasized on Wednesday the importance of including the Conuco Project – promoted by the National Executive four years ago – as one of the cornerstones of the Great AgroVenezuela Mission, in order to strengthen the country’s productive apparatus. He instructed Minister Castro Soteldo to initiate all actions so that the “Conuco Project” becomes part of the nine corners of the Great Mission.

“I don’t see the Conuco Project at the vertices. I don’t want it to be subsumed in anything. The plan that I launched four years ago, to assume the Conuco concept, but that it be our root, base, integrally, care for the land, and land production concept. I want to have it as a vertex, the Conuco concept,” said the National President, during the videoconference with the peasant sector.

The concept must be on all scales: from the family to the high-level production scale.

For her part, the spokeswoman for the state of Barinas, Lesbia Solórzano, recalled that when Commander Chávez founded the mission, 682,000 peasants and producers from all over the national territory registered. In addition, she proposed creating a campaign for the dissemination of everything related to bio-inputs, because “there is ignorance of them and their entire process in growing food.”

Likewise, she pointed out the need to verify and determine the conditions of 1,400,000 hectares that were granted to the Social Production Units (UPS), in order to work together with the peasants. “We want to know what conditions they are in. They are in different states, and they work,” said Solórzano.

In this regard, Castro Soteldo stressed that in the last four years, 3,767,683 hectares were delivered, of which there is a census to carry out a restoration “because many were handed over and not worked,” he said. President Maduro held a broadband dialogue with peasant movements and agricultural representatives in the country’s regions, as part of the Productive Wednesday session.