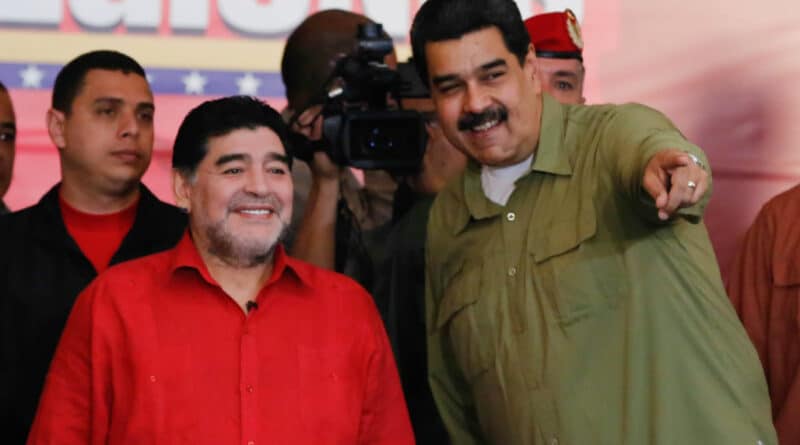 The Venezuelan President, Nicolás Maduro, sent a letter of condolences to the Argentine people on Thursday for the departure of soccer star Diego Armando Maradona. “These words that I send to the Argentine people express the pain that Venezuelans feel for the departure of our great friend and brother, Diego,” wrote the president. “An immense hug and infinite love to his daughters, sons and relatives,” added the letter, released by Maduro on social media platforms.

Maradona died this Wednesday after suffering a cardio-respiratory arrest at his home, located in the neighborhood of Tigre, Buenos Aires.

He was one of the most recognized footballers in history and admired by a wide, young, and contemporary public.

RELATED CONTENT: Orinoco Tribune: Two Years Online and Kicking – What Does That Mean?

He stood out for his ideological sympathy with the commanders Hugo Chávez, and Fidel Castro, whom he called his second father.

With the deepest regret I write these lines: we have received a devastating blow to our feelings. A friend, a brother, has physically disappeared: a Giant on and off the court. The People of Venezuela is with you, your daughters and sons, and with our brother Argentine People.

From the beginning of his career, it was clear that Diego was going to make history on the court and he did. With La Albiceleste (Argentinian national soccer team) and with all the clubs he played for, he literally wrote pages of gold, indelible pages.

I am among those who consider Diego the Greatest Soccer Player of all time: there is a before and after Maradona, a before and after the crack of the prodigious left-handed, the incomparable artist, the Cosmic Kite that continues and will continue to fly high.

Rebel, irreverent, but above all a genuine patriot, an unyielding fighter for the cause of the unity of the Great Homeland (Patria Grande). I want to evoke Diego who became one of the great gravediggers of the FTAA there in Mar del Plata in November 2005: there he was, together with our Eternal Commander, demonstrating his status as a champion of dignity.

In reality and in truth, the Golden Boy of America deservedly earned the love of our Peoples. Diego not only leaves us with an extraordinary football legacy: our “Pelusa” embodies a human and political legacy as luminous as it is imperishable.

I speak of Diego de los Pueblos, Diego loyal to his origins, Diego of children, Diego who will live in us forever: Fidel’s son, Hugo’s and Evo’s brother, my brother. The Diego who did not hide his infinite love for Venezuela, the Diego who was an irreducible defender of the Bolivarian Revolution, the proud Chavista.

Receive an infinite hug from the People of Bolívar and Chávez who carry Diego in their hearts. 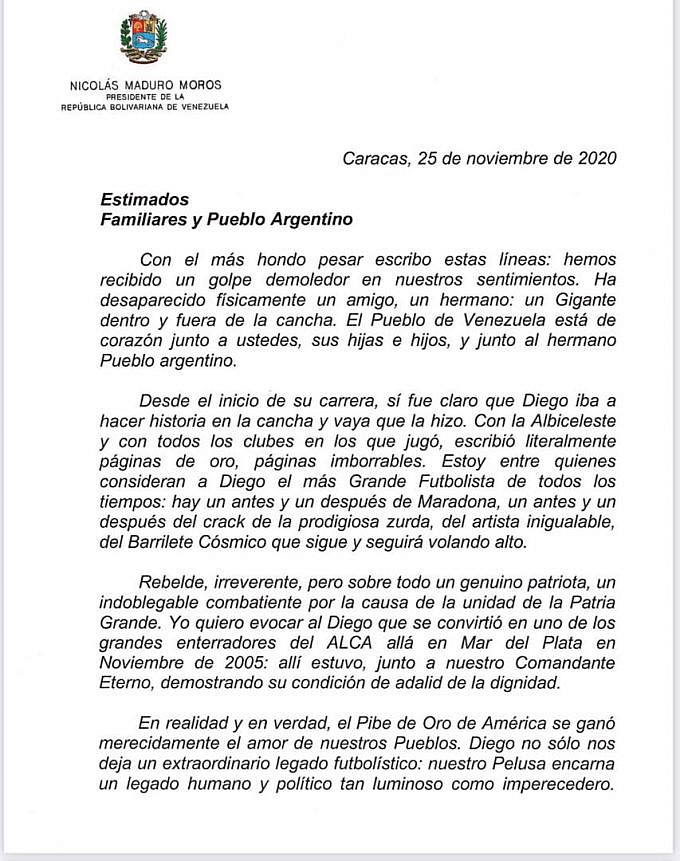