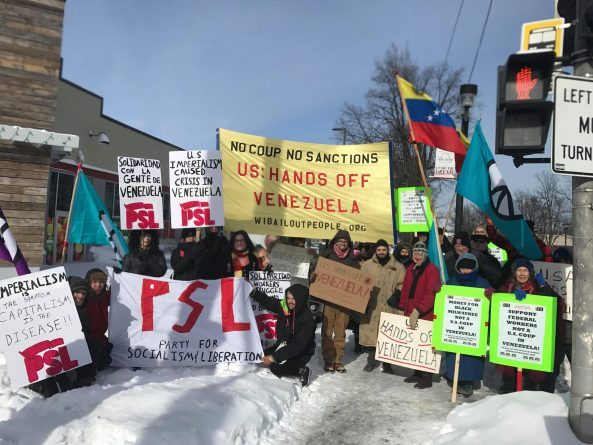 The President of the Bolivarian Republic of Venezuela, Nicolas Maduro, stressed that in the United States a great movement of solidarity with Venezuela is being waged in rejection of the coup d’état promoted by the US government against the Venezuelan nation.

This was highlighted by the national leader, Nicolas Maduro, this Saturday in reference to the concentration of the US people in front of the White House in Washington against the coup. It’s important to highlight that most of this activities in the USA were organized by Answer Coalition and the Party of Socialist Liberation, another important group of  organizations and individuals join their initiative and lots of Venezuelans are very thankful for that.

He also thanked the demonstrations of solidarity expressed by the people of Spain and Turkey, in support of Venezuela, its democracy and its legitimate government and the constitution.

In the United States there were also events of solidarity in Milwaukee, Baltimore, Chicago, Los Angeles among others disregarding the subzero temperatures that are affecting these days in North America. We leave below some images and videos of the hermanos from the US, Canada, Turkey , Chile and Spain who support the Chavismo and the Bolivarian Revolution. If you have more relevant images from other cities or countries feel free to share them with us and we will post them here in further updates:

The Bolivarian Revolution has support everywhere: Mali in West Africa displays its solidarity with Venezuela. pic.twitter.com/9x6E3IojR0