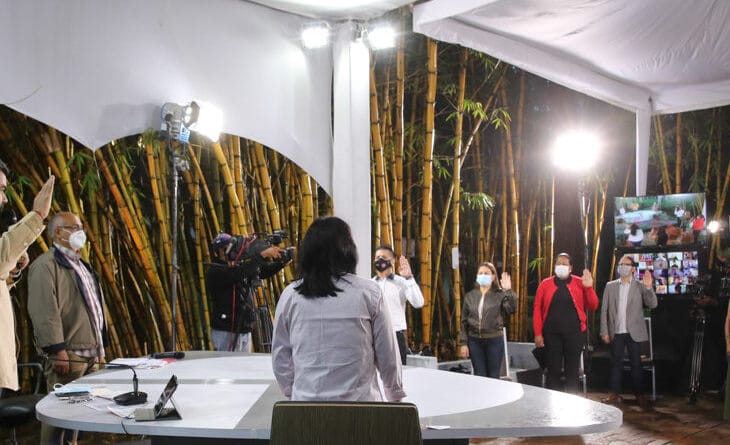 The president of the Bolivarian Republic of Venezuela, Nicolás Maduro, urges the new members of the Ministerial Cabinet to propose new goals to strengthen the revolutionary process.

“You have to set new goals, change everything that has to be changed, you have my support to change, renew, everything that is necessary,” said the Venezuelan head of state during the swearing-in ceremony with the new ministers.

Last Friday, the national president appointed eight new ministers – six women and two men -, who will occupy the positions of the incumbents who took on the electoral battle for the parliament on December 6.

Among the newly elected ministers is Carolys Helena Pérez González with the great responsibility of taking the reins of the Ministry for Women and Gender Equality.

Her approach, she said, will be to make visible the importance of women, and the generation and construction of socialist feminism, “to have the society we dream of.”

Greicys Dayamni Barrios Prada, assumed the Ministry of Urban Agriculture, while the constituent Noris Herrera Rodríguez will be in charge of the Ministry for Communes and Social Movements.

In statements broadcast by Venezolana de Televisión, both showed their interest in improving the country’s situation and strengthening the tasks of the revolution.

Yamilet Mirabal de Chirino, from the state of Amazonas, will lead the portfolio of the Ministry for Indigenous Peoples.

During the swearing-in, Chirino indicated that work will be done to strengthen the tasks of indigenous peoples in the country, he as well recalled that it was with the arrival of Commander Hugo Chávez that gave indigenous peoples visibility.

The Ministry for Youth and Sports will be headed by Mervin Maldonado, who indicated that his work will be focused on strengthening productive youth.

“It is a historic and stellar moment for the homeland, we hope to continue fighting in unity,” Ñáñez said in statements broadcast by Venezolana de Televisión, during a working day led by the President of the Republic, Nicolás Maduro.

During the event, the new Minister for Communication and Information said that his main priorities since his inauguration are to win the battle against Covid-19 by informing the people daily to reduce new infections, fight against the blockade, and take care of the peace of Venezuela.

Ñáñez was appointed last Friday as the new Minister for Communication, replacing Jorge Rodríguez, who will run as a candidate for the National Assembly for the Great Patriotic Pole (GPP).

Freddy Ñañez was in charge of Venezolana de Televisión as president, as well as held the position of Minister for Culture.