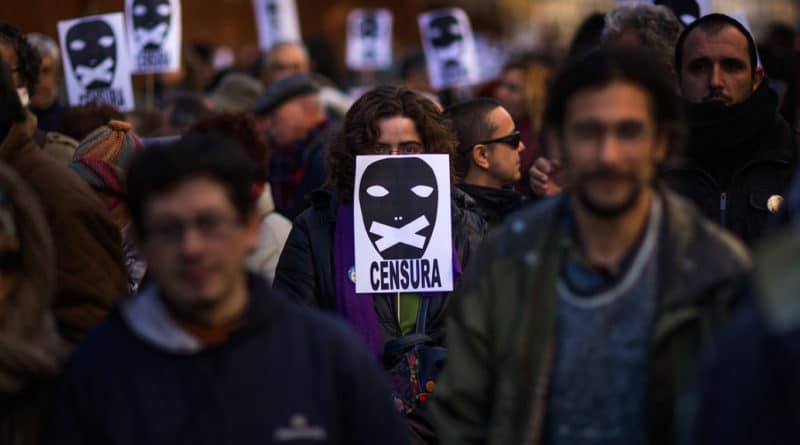 A group of right-wing Venezuelans has managed to ban the use of a range of alternative media outlets covering Venezuela, including MintPress News.

Still unable to convince a sufficient number of their countryfolk to support them, the Venezuelan opposition has turned their efforts towards convincing an international audience – primarily Americans – to support their cause. Part of that is spending inordinate amounts of time online, arguing in English on social media, creating bot networks, and editing Wikipedia articles. Many Wikipedia articles on Venezuela are particularly biased towards the opposition, containing numerous inaccuracies, falsehoods and non-sequiturs.

Now, according to The Grayzone, a group of right-wing Venezuelans has managed to ban the use of a range of alternative media outlets that do not comport with their views. These include MintPress (already blackballed by Wikipedia), The Grayzone, and the much-lauded independent news site Venezuelanalysis, the most extensive English-language resource on the country available. One user in particular, ZiaLater, a member of a group called “Project Venezuela” who control and moderate content related to the country, was the catalyst for the banning of the sites taking an anti-imperialist stance. Some members of Project Venezuela spend long hours changing Venezuela-related pages so they are more critical of the government and sympathetic to the opposition.

Wikipedia suggests using corporate-funded mainstream sources who they feel are “generally reliable.” However, on Venezuela, these same outlets closely resemble and parrot U.S. regime change propaganda. For example, CNN, the BBC, and the Daily Telegraph all reported the blatant falsehood that the Venezuelan government burned aid trucks trying to enter the country last year. In reality, it was the opposition themselves that burned their own trucks, as immediately reported by The Grayzone, MintPress News, and other outlets who were actually there. Multiple well-circulated live streams also showed the event in real-time. However, that was all ignored. The New York Times, a site recommended by Wikipedia for citation, currently employs a journalist covering Venezuela who openly admitted to me on tape that he considers himself a “mercenary” and deliberately plants outrageously exaggerated stories into Western media to push his goals. Other journalists told me that their colleagues consider it their number one mission to overthrow the Maduro government.

In 2017, The Washington Post published an article openly calling for a violent coup in the country, and currently employs a Venezuelan journalist who resigned from The New York Times, saying, “Too much of my lifestyle is bound up with opposition activism” that he “can’t possibly be neutral.” Meanwhile, The Guardian described Oscar Perez, a local ex-soldier who hijacked a helicopter and used it to bomb parliament buildings as a “patriot,” and even pushing the debunked conspiracy theory that Perez was a “government plant.” They have not retracted it, nor apologized. This is just a minor sampling of the opposition propaganda disguised as objective reporting pumped out constantly by corporate media. “The media coverage of Venezuela is about as terrible as for any country in the world, except possibly for Palestine. It is utterly biased, misleading and distorted,” said Dan Beeton, an economist and Latin America specialist from the Center for Economic Policy Research. “The gap between the image and the reality of Venezuela,” said professor William I. Robinson of the University of California, Santa Barbara, “is so enormous that it is unfathomable.”

In contrast, MintPress has a number of experienced contributors based in Latin America, including Camila Escalante and Ollie Vargas. I myself have published a Ph.D., book, and five peer-reviewed studies in academic journals on the country and find myself in the mainstream of academic thought. Yet the chasm between how specialists see the country and how it is reported in media is so large that we appear ultra-partisan in comparison to the corporate monolith.

A tool to propagate the biases of the ruling elite

While the popular view of Wikipedia is that it is a collective public undertaking that anyone and everyone can add to, in reality, the online encyclopedia has come to mirror the inequalities present in society. The more edits you do, the more power, prestige and influence you accrue, allowing individuals to wield unreasonable power over the world’s 13th most visited website. A class of powerful editors has emerged, who spend hours every day editing and changing content how they see fit. There are strong suspicions that governments and other wealthy organizations are paying people – or teams of people using the same account – to moderate the site full-time, and these power users openly advertise their services to corporations or other groups who want to sanitize or promote their image by changing their pages. Because these users have climbed the Wikipedia hierarchy, their edits become law and are very difficult to overrule.

The CIA has been exposed changing the pages of politically sensitive topics, such as the U.S. invasion of Iraq, Ronald Reagan and Richard Nixon, an FBI computer was spotted editing the entry on Guantanamo Bay, while the NYPD amended Eric Garner’s page and even tried to remove pages focussing on police brutality. Israeli groups are also active on the site, conducting an information war, trying to improve the country’s image. The Guardian revealed they even gave out awards and prizes like free balloon rides for those selected as the “best Zionist editor.”

Thus, the site has effectively been turned into “a tool to propagate the reigning ideology and biases of the ruling elites,” in the words of former New York Times journalist Chris Hedges. As Wikipedia has shown little interest in opposing the site being slowly taken over by organized groups, it is unlikely that the mass blacklisting will be overturned.

Featured image: A demonstrator marches with a placard that reads: “Censorship” during a protest in Madrid. Andres Kudacki | AP