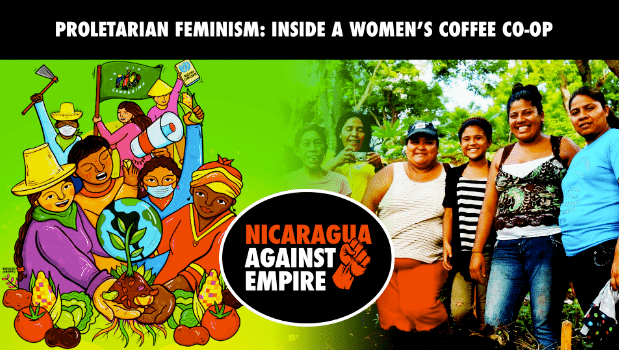 Formed in 2008, the Cooperative is run by and for Nicaraguan peasant women. Their primary crop is coffee, but they also grow plantains, beans, vegetables, and other staple foods.

They work closely with the Rural Workers’ Association (known as the ATC) and the Sandinista Revolution, led by President Daniel Ortega.

The women of the Cooperative have fought for and won land titles in their names, their own homes, access to education, improved roads, and most recently, a community water well.

RELATED CONTENT: Without Farming and Art, There is no Revolution (A Reflection on the 2021 Agri-Cultural Brigade to Nicaragua)

In this video, you hear directly from Eloisa and Lea, who discuss the impact of the Sandinista Revolution on women workers in rural Nicaragua.

They also talk about the importance of protecting the environment from ecological devastation produced by capitalism.

Nicaragua Against Empire is a documentary series that highlights Nicaraguan resistance to Western imperialism. Recorded and produced by Ramiro Sebastián Fúnez.