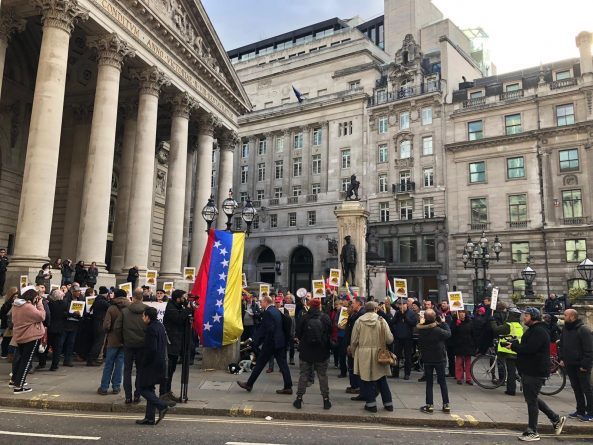 In the city of London, hundreds of protesters settled in on Thursday in front the Bank of England, to demand that their authorities return to Venezuela their gold reserves that remain deposited in this entity, according to the agency AFP.

Citizens mostly British, wore costumes alluding to the US president, Donald Trump, and gold bullion. “The Maduro government is a legitimate government, it was elected and it is recognized by most countries of the world,” Robert Miller, 50, who belongs to an organization dedicated to charity, told the agency.

“Why doesn’t the Bank of England take gold from some other country? A financial institution can not determine who carries out repression and who does not, ” he said. In addition, Miller demanded that the United States and several European nations cease their aggression against Venezuela. “It is international piracy on a global scale,” he said, referring to the retention of Venezuelan gold in England.

For her part, activist Danielle Veal, denounced the interest of the United States in appropriating Venezuelan oil and putting pressure on the government.

Since the end of last year, the President of Venezuela, Nicolás Maduro Moros, has taken steps to repatriate the gold found in this European country, however, the bank authorities refuse to return the resources of the Venezuelan people. The Bank of England holds about 1,300 million pounds of gold bullion that were deposited during the presidency of Hugo Chávez, Professor Francisco Domínguez, secretary of the British division of the Campaign in Solidarity with Venezuela (VSC), told Sputnik.

According to The Times, the British banking entity refused to deliver 14 tons of gold, valued at 550 million dollars last November.