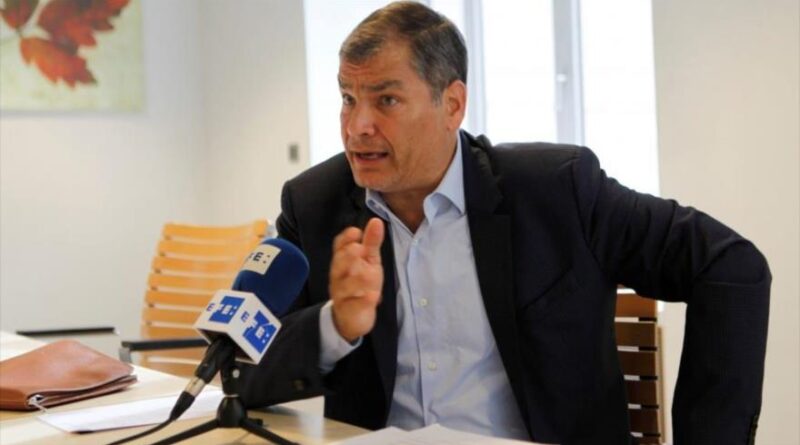 Former Ecuadorian President Rafael Correa considers that the Justice of his country has made a “new ridicule” by requesting to Interpol that he be arrested for bribery.

The Ecuadorian judicial system asked the International Criminal Police Organization (Interpol) on Tuesday to “proceed with the red notice” against Correa and 14 others convicted in the so-called “Bribery Case” (2012-2016).

Judge Iván León, who signed the request, pointed out that there is already a “duly executed” conviction against Ex-President Correa.

The magistrate also indicated that the whereabouts of the 15 persons sentenced are unknown, and requested that the respective official letter be sent “immediately” to the head of the Interpol National Unit.

In this regard, Correa has rejected the request of the Ecuadorian Justice and has accused Judge León of being “completely corrupt”.

“New ridicule for Ecuador, but, of course, we will have to spend again on lawyers, travel restrictions, etc. Thus they seek to break us. In this case, Iván León, TEMPORARY judge, is completely corrupt, ” he tweeted Wednesday.

The Ecuadorian Justice had already disqualified the former president from holding any political position, thus preventing his participation in the elections of February 7, 2021. Many analysts agree that this decision was part of a lawfare operation promoted in Latin America by the US government against progressive leaders.

The body has sentenced Correa and several former government officials to eight years in prison for the crime of “aggravated bribery” in the framework of the case “Bribes 2012-2016 (years of Correa’s mandate).”

Correa denounces that the Government of Lenin Moreno (current president of the country) uses justice to achieve what it is not able to do at the polls, and warns that ” political persecution is being used as a method against the progressive leaders of Latin America.”

According to Correa, the corrupt person is Moreno, but he feels untouchable because he has the support and protection of the United States covering his criminal acts. The former president has endured strong political and judicial pressure since the arrival to power of his former ally and former vice president Moreno in 2017, who withdrew from Correa’s Alianza País party and recently banned it.

Featured image: The former president of Ecuador Rafael Correa during an interview with the Spanish news agency EFE.