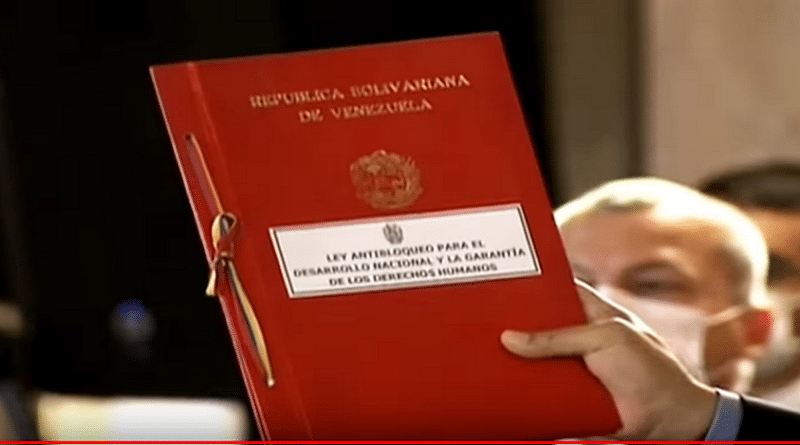 The President of Venezuela, Nicolás Maduro, announced on Wednesday afternoon that his government already has the final draft of the Anti-Blockade Law that will be debated this Thursday, October 8, in the National Constituent Assembly (ANC).

“Tomorrow the ANC receives in plenary session, from the hands of the Special Commission for the Anti-Blockade Law, the final expanded and improved draft. I have great faith and hope that with this Law we are moving towards a necessary change,” said the head of state.

“The Anti-Blockade Law has been looked at this week and a half with the entire country, with the popular movement and the ordinary people. From that consultation, proposals emerged to improve the initial proposal that I have made,” said the head of state during a broadcast by Venezolana de Televisión (VTV), in the framework of the start of the 2020 Harvest Plan, promoted to guarantee food security in Venezuela.

He also stressed that “this is a great country that has hope… It is one of the most forceful responses to overcoming the blockade and sanctions, towards the development of the productive forces of Venezuela.”

Let us remember that the Vice President of the Republic, Delcy Rodríguez, recently stated that at least 93% of the 12 million people who filled out the survey on the blockade of Venezuela, through the Patria System, support the plenipotentiary body’s approval of the Anti-blockade Law.

President Maduro also mentioned that when approved, the law will go to the Supreme Court of Justice to decide over its compliance with the Magna Carta.

Disregarding the fact that there has been some opacity about the scope and content of the law, many personalities within Chavismo have raised their opposition over the possibility that this law might usher in a heavier deterioration of working condition for millions of Venezuelan already affected by several years of US sanctions and blockade. Others see it as an opening of doors for international corporations or enterprises that might reverse the achievements gained during recent years in terms of Venezuelan control over oil and oil-related industries’ production.

“Despite the opacity, one has to take into account that we Venezuelans and the State have been subjected to an unconventional war declared by Washington, with growing force since 2015, and this war demands that the Venezuelan state adjust its mechanisms and legal restrictions to properly respond to US and European Union aggression. One should ask oneself what might be better, to have an Anti-Blockade Law or to force the state to declare a constitutional State of Emergency,” a political expert told Orinoco Tribune.