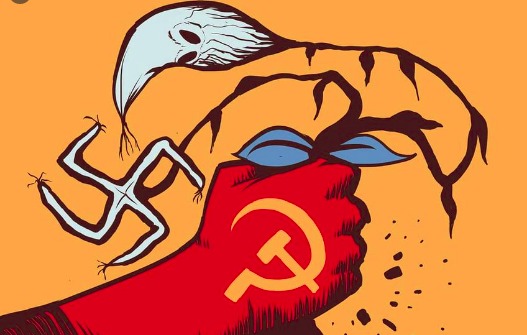 American collapse presents us with two diverging paths, ones which respectively mean massive genocide and the liberation of the U.S. masses from capitalist and colonialist subjugation. These paths are the transformation of the U.S. into a full-on Nazi regime, and the abolition of the U.S. government so that this continent can be made into a post-colonial socialist civilization.

Each day, both of these outcomes are made ever more likely by the deteriorating conditions that the country is sliding into. As international capital finds itself weakened by our current global depression, as the climate crisis threatens to shrink the global economy irrevocably, as U.S. geopolitical influence shrinks, fascism becomes the system’s only means for self-preservation. In the face of capitalism’s inevitably diminishing returns and the decline of U.S. imperialism, the country’s bourgeoisie can only keep up profits through foisting the costs of the system’s crises onto the lower classes, a process which for this last half-century has entailed wage cuts, the dismantling of social services, reduction of workers rights, privatization, and a pushing of the tax burden onto the poor. Since these things inflame class tensions, the violent repression of fascism can be the state’s only response.

At the same time, an anti-colonial proletarian revolution is being made more likely by the incentives that the people are getting to overthrow the capitalist state. In the last year, the country’s unemployment rate has skyrocketed to around 15%. A quarter of the population now experiencesregular hunger compared to the 10% of U.S. families who were already food insecure before the pandemic. At the outset of the pandemic, 50 million renters experienced job or wage loss related to Covid-19. These things haven’t happened in workers democracies like China, where poverty has actually decreased during the last year. They’re the consequences of the capitalist settler-colonial state’s continued grip over the U.S. population.

The question of whether these developments will produce revolution or fascism runs through whether or not U.S. imperialism’s chauvinistic, reactionary strains win out despite the growing conditions for mass radicalization. Part of this will be decided by how much power the country’s colonized peoples manage to gain. This is because being the most victimized by the U.S. empire, colonized peoples have the most potential to make up the revolutionary vanguard on this continent. As journalist Eleanor Goldfield wrote in January, “you may have heard that the economy lost 140,000 jobs in December. What may have flown under the radar is the fact that men actually gained 16,000 jobs, while women lost 156,000. 154,000 of those were black women.” And as journalist Emily Benfer wrotethis last month, “Sixty-one percent of Latinx and 44 percent of Black households experienced a job or wage loss due to the pandemic, compared with 38 percent of whites.” The same kind of disproportionately increasing poverty this last year compared to whites has applied to indigenous communities. The colonized stand the most to gain from revolution, making them the biggest threat to the survival of the empire.

What will also help decide our fate is how many of the white settlers decide to join up with the radicalized victims of colonialism in fighting to take down the state. Obviously less whites are going to stand with the revolution than will be the case for the colonized, which is why the colonized are going to make up the vanguard. But as the conditions of the core of U.S. imperialism keep getting worse, to the effect that U.S. imperialism is turning its most brutal types of exploitation inwards, increasing numbers of whites are gaining the potential for radicalization.

This is because while some U.S. whites benefit from imperialism through being bribed from the money gained by imperialist super-profits, the nature of this contracting system is pushing ever more whites into economic deprivation, if not proportionately as much as is the case for nonwhites. As Marxist commentator Dr. Asata Bair wrote this week:

As capitalism developed into the late 70s and early 80s, a whole set of neoliberal policies ended the period of wage growth, and begun the vast divergence between productivity and real wages that has been in force ever since. A divergence which has led to rising profits for the bourgeoisie and a greater and greater struggle for the average working person. As social safety nets were stripped away, attacks on unions through legislation increased, and trade was liberalized, leading to massive outsourcing. Costs were cranked down for capitalist firms, and the combination of higher productivity and lower costs led to falling prices for many manufactured consumer goods, from apparel to tools to electronics. These falling prices are potentially a boon to workers, but in the last few decades this has not been much of a benefit, because lower prices are barely keeping workers afloat in the context of rising rent and stagnant wages. The median US household is barely maintaining itself with a combination of low prices on manufactured goods and consumer debt (car loans, credit card debt, and home equity loans, for example). While it is possible that the workers see a benefit from imperialism, it is also possible that most or all of that benefit ends up being captured by capitalist firms, as seems to be the case right now.

It’s this loss that the white working class has largely experienced along with the colonized working class which expands the potential base for the revolutionary socialist movement. The growing “precariat” of unemployed, underemployed, and underpaid people may not include whites in the same proportions as the victims of colonialism, but a growth in economically disenfranchised whites is there. The question is how many of them will stay complicit in the fascist terror campaigns of the coming decades, and how many will join the resistance.

However many or few whites do the right thing, the black, brown, and Native radicals are going to continue building up their national liberation organizations. The ongoing expansion of inhumane detention camps for brown people, the encroachment of our militarized racist police state, and the emboldening of white supremacist terrorist organizations necessitate this. These battle lines, the ones between white nationalists who seek ethnic cleansing and colonized peoples who are determined to survive, have already been drawn.

For revolution to materialize, these battle lines need to be expanded. The proletariat and the impoverished more broadly must be brought into a conflict with the bourgeoisie and its collaborators. This can be done through building Marxist-Leninist organizations, agitating among the masses for why proletarian revolution is the solution, and organizing mass strikes like the ones which won the Cuban revolution. As imperialism’s decay keeps worsening the conditions of the masses, these tasks will get easier.

And how to bring the masses towards this agenda? How to stop the forces of U.S. patriotism and liberalism-which serve to reinforce the progression towards fascism-from blocking a rise in revolutionary consciousness? By relentlessly exposing the reasons why continuing to align with the U.S. creates a death sentence for capitalism’s victims, both colonized and white. As Lenin wrote, “One of the principal reasons why Bolshevism was able to achieve victory in 1917 — 20 was that, since the end of 1914, it has been ruthlessly exposing the baseness and vileness of social-chauvinism.” Let’s direct this ruthless ridicule against the imperialist propagandists, opponents of decolonization, and anti-communists who seek to snuff out the effort to defeat fascism.