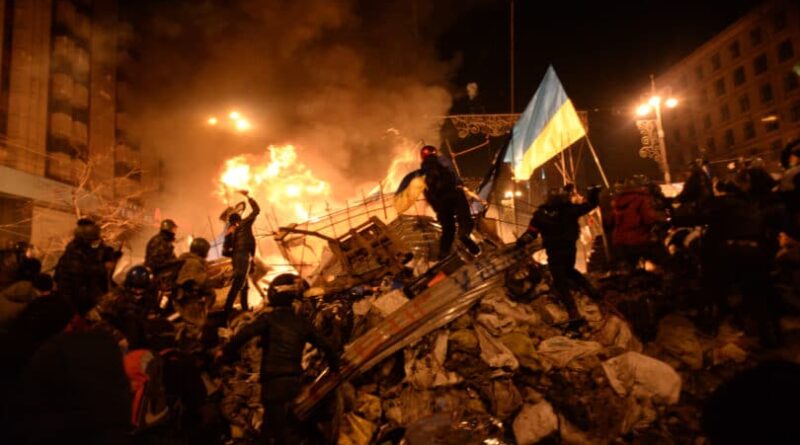 We wanted to draw readers attention to this piece by Samir Amin, which was written at the time of the Maidan Coup in 2014. —Eds.

1. The current global stage is dominated by the attempt of historical centers of imperialism (the U.S., Western and Central Europe, Japan—hereafter called “the Triad”) to maintain their exclusive control over the planet through a combination of:

a) so-called neo-liberal economic globalization policies allowing financial transnational capital of the Triad to decide alone on all issues in their exclusive interests;
b) the military control of the planet by the U.S. and its subordinate allies (NATO and Japan) in order to annihilate any attempt by any country not of the Triad to move out from under their yoke.

In that respect all countries of the world not of the Triad are enemies or potential enemies, except those who accept complete submission to the economic and political strategy of the Triad—such as the two new “democratic republics” of Saudi Arabia and Qatar!  The so-called “international community” to which the Western medias refer continuously is indeed reduced to the G7 plus Saudi Arabia and Qatar.  Any other country, even when its government is currently aligned with the Triad, is a potential enemy since the peoples of those countries may reject that submission.

Whatever might be our assessment of what the Soviet Union was (“socialist” or something else), the Triad fought it simply because it was an attempt to develop independently of dominant capitalism/imperialism.

After the breakdown of the Soviet system, some people (in Russia in particular) thought that the “West” would not antagonize a “capitalist Russia”—just as Germany and Japan had “lost the war but won the peace.”  They forgot that the Western powers supported the reconstruction of the former fascist countries precisely to face the challenge of the independent policies of the Soviet Union.  Now, this challenge having disappeared, the target of the Triad is complete submission, to destroy the capacity of Russia to resist.

3. The current development of the Ukraine tragedy illustrates the reality of the strategic target of the Triad.

The Triad organized in Kiev what ought to be called a “Euro/Nazi putsch.”  To achieve their target (separating the historical twin sister nations—the Russian and the Ukrainian), they needed the support of local Nazis.

The rhetoric of the Western medias, claiming that the policies of the Triad aim at promoting democracy, is simply a lie.  Nowhere has the Triad promoted democracy.  On the contrary these policies have systematically been supporting the most anti-democratic (in some cases “fascist”) local forces.  Quasi-fascist in the former Yugoslavia—in Croatia and Kosovo—as well as in the Baltic states and Eastern Europe, Hungary for instance.  Eastern Europe has been “integrated” in the European Union not as equal partners, but as “semi-colonies” of major Western and Central European capitalist/imperialist powers.  The relation between West and East in the European system is in some degree similar to that which rules the relations between the U.S. and Latin America!  In the countries of the South the Triad supported the extreme anti-democratic forces such as, for instance, ultra-reactionary political Islam and, with their complicity, has destroyed societies; the cases of Iraq, Syria, Egypt, Libya illustrate these targets of the Triad imperialist project.

4. Therefore the policy of Russia (as developed by the administration of Putin) to resist the project of colonization of Ukraine (and of other countries of the former Soviet Union, in Transcaucasia and Central Asia) must be supported.  The Baltic states’ experience should not be repeated.  The target of constructing a “Eurasian” community, independent from the Triad and its subordinate European partners, is also to be supported.

But this positive Russian “international policy” is bound to fail if it is not supported by the Russian people.  And this support cannot be won on the exclusive basis of “nationalism,” even a positive progressive—not chauvinistic—brand of “nationalism,” a fortiori not by a “chauvinistic” Russian rhetoric.  Fascism in Ukraine cannot be challenged by Russian fascism.  The support can be won only if the internal economic and social policy pursued promotes the interests of the majority of the working people.

What do I mean by a “people-oriented” policy favoring the working classes?

Do I mean “socialism,” or even a nostalgia of the Soviet system?  This is not the place to re-assess the Soviet experience, in a few lines!  I shall only summarize my views in a few sentences.  The authentic Russian socialist revolution produced a state socialism which was the only possible first step toward socialism; after Stalin that state socialism moved towards becoming state capitalism (explaining the difference between the two concepts is important but not the subject of this short paper).  As of 1991 state capitalism was dismantled and replaced by “normal” capitalism based on private property, which, as in all countries of contemporary capitalism, is basically the property of financial monopolies, owned by the oligarchy (similar to, not different from, the oligarchies running capitalism in the Triad), many coming out of the former nomenklatura, and some newcomers.

The explosion of creative authentic democratic practices initiated by the Russian (October) revolution was subsequently tamed and replaced by an autocratic pattern of management of society, albeit granting social rights to the working classes.  This system led to massive depoliticization and was not protected from despotic and even criminal deviations.  The new pattern of savage capitalism is based on the continuation of depoliticization and the non-respect of democratic rights.

Such a system rules not only Russia, but all the other former Soviet republics.  Differences relate to the practice of the so-called “Western” electoral democracy, more effective in Ukraine, for instance, than in Russia.  Nonetheless this pattern of rule is not “democracy” but a farce compared to bourgeois democracy as it functioned at previous stages of capitalist development, including in the “traditional democracies” of the West, since real power is now restricted to the rule of monopolies and operates to their exclusive benefit.

A people-oriented policy implies therefore moving away, as much as possible, from the “liberal” recipe and the electoral masquerade associated with it, which claims to give legitimacy to regressive social policies.  I would suggest setting up in its place a brand of new state capitalism with a social dimension (I say social, not socialist).  That system would open the road to eventual advances toward a socialization of the management of the economy and therefore authentic new advances toward an invention of democracy responding to the challenges of a modern economy.

It is only if Russia moves along such lines that the current conflict between, on the one hand, the intended independent international policy of Moscow and, on the other hand, the pursuit of a reactionary social internal policy can be given a positive outcome.  Such a move is needed and possible: fragments of the political ruling class could align on such a program if popular mobilization and action promote it.  To the extent that similar advances are also carried out in Ukraine, Transcaucasia, and Central Asia, an authentic community of Eurasian nations can be established and become a powerful actor in the reconstruction of the world system.

5. Russian state power remaining within the strict limits of the neo-liberal recipe annihilates the chances of success of an independent foreign policy and the chances of Russia becoming a really emerging country acting as an important international actor.

Neo-liberalism can produce for Russia only a tragic economic and social regression, a pattern of “lumpen development” and a growing subordinate status in the global imperialist order.  Russia would provide to the Triad oil, gas, and some other natural resources; its industries would be reduced to the status of sub-contracting for the benefit of Western financial monopolies.

In such a position, which is not very far from that of Russia today in the global system, attempts to act independently in the international area will remain extremely fragile, threatened by “sanctions” which will strengthen the disastrous alignment of the ruling economic oligarchy to the demands of dominant monopolies of the Triad.  The current outflow of “Russian capital” associated with the Ukraine crisis illustrates the danger.  Re-establishing state control over the movements of capital is the only effective response to that danger.

Samir Amin (1931-2018) was one of the world’s greatest radical thinkers. Born in Egypt, he served as director of Third World Forum in Dakar from 1980 until his death. He has written numerous articles and books for Monthly Review and Monthly Review Press, including Accumulation on a World Scale: A Critique of the Theory of Underdevelopment (1974), The Law of Worldwide Value (2010), and Samir Amin: Memoirs of an Independent Marxist (2018).