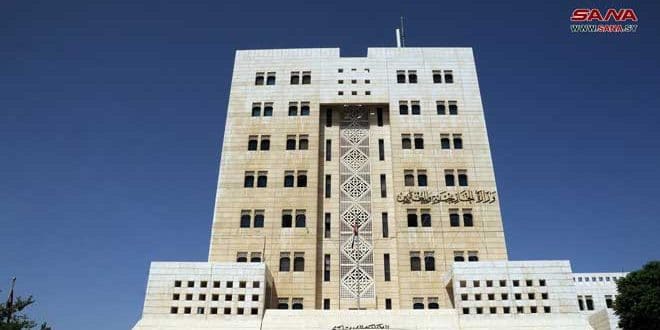 The Foreign and Expatriates Ministry of Syria declared that the government of Syria has reaffirmed its stance regarding the so-called “Brussels Conference on Supporting the Future of Syria and the Region,” held on May 9 and 10, especially since such conferences, in their current form, do not comply with the principles of the UN regulating humanitarian action and are held without participation of the main country concerned, which in this case is the Syrian Arab Republic.

The Foreign Ministry said in a statement on May 9 that these conferences do not reflect any real commitment to help the Syrian people regain their rights, particularly if “we consider the fact that the countries organizing or participating in these conferences occupy or support the occupation of part of the Syrian territory and loot the resources of the Syrian people in cooperation with their tools, the separatist militias.”

The ministry added that those same countries are also imposing economic blockade and unilateral coercive measures on the Syrian people in an inhuman manner, which have affected even the ability to secure their basic requirements like fuel, food and medicine, which clearly contradicts the declared goal of these conferences.

The ministry further commented that it is no longer a secret to anyone that the organizing countries of the conference are politicizing the issue of providing humanitarian aid and linking it to political preconditions that have nothing to do with the requirements and objectives of humanitarian actions, including obstructing the reconstruction process, hindering the return of refugees and insisting on not supporting them inside Syria after their return to their home country.

The ministry clarified that what would once again stress the extent of politicization of this issue is the failure to invite the Russian Federation or other countries with a balanced stance to participate in the sixth Brussels Conference for purely political reasons that have nothing to do with the situation in Syria.

It went on to say that Syria, before it was stricken by Western-backed terrorism in particular, was a self-sufficient country enjoying high levels of economic growth, and was not subject to any external debt, nor was in need of any assistance.

On the contrary, Syria was at the forefront of the countries hosting millions refugees from countries of the region as well as from Europe, and provided them with everything necessary without any discrimination or politicization, the statement concluded.