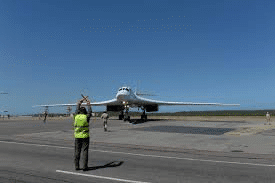 The Russian ambassador in Venezuela, Vladimir Zaemski, assured that the sending of flights of Russian military aircraft to Venezuela is part of the Russian-Venezuelan cooperation and therefore, in the future it is likely that continue to occur always adhering to international standards. These statements respond to international alarm reactions by the arrival of two Tupolev Tu-160 strategic bombers, (a heavy transport aircraft Antónov An-124 and a passenger plane Ilyushin Il-62 of the Russian Aerospace Force) as well as rumors of the supposed plan to install a Russian military base on an island in the Caribbean country, the latter denied by the Russian diplomat.

“The information published by various media on alleged consultations to create a military base in the territory of Venezuela are purely and simply a speculation,” declared Zaemski bluntly.

However, the Russian ambassador in the oil producing country reiterated that in Venezuela the threat of military intervention by “aggressive forces (which) continue with their plan to overthrow the current Venezuelan Government” persists, a tension that increases with the failure of unilateral sanctions promoted from the USA.

Also, Zaemski reiterated that the fears of the joint flights of Russia and Venezuela are unfounded and recalled that in the years 2018 and 2013 similar flights had already been occurred in a transparent manner.

“The permanent consolidation of relations between Russia and Venezuela is aimed at achieving concrete results in favor of regional and global stability and security, the defense of the UN Charter, as well as the norms and principles of international law,” concluded Zaemski.