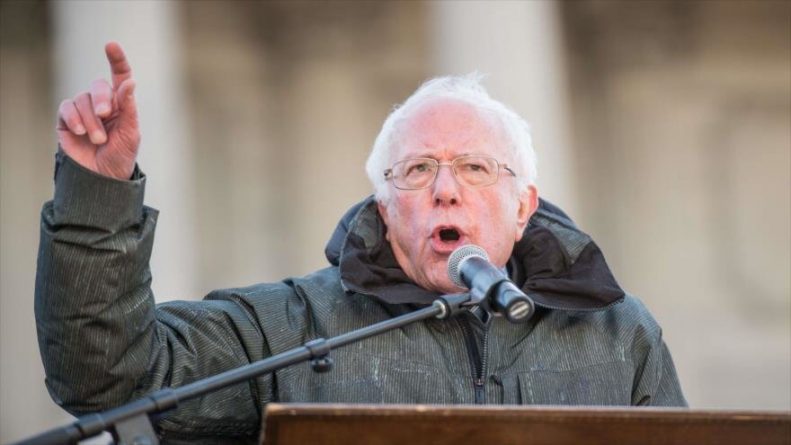 The US should not return to his history of intervening in Latin America, says Senator Bernie Sanders and asks Trump not to support the coup leaders in Venezuela.

“The United States has a long history of inappropriately intervening in Latin American countries, and we should not continue that path again,” US Senator Sanders said in a statement on Thursday.

In this way, the Democrat alluded to the situation generated in Venezuela after the self-proclamation of Juan Guaidó, head of the National Assembly (AN) as “interim president” of the country.

Sanders also recalled the coup image of his country in its history, specifically in Latin America. “We must learn from the lessons of the past and not participate in regime changes or support blows, as we have done in Chile, Guatemala, Brazil and the Dominican Republic,” he said.

The self-proclamation of the coup leader of the AN was supported by the Administration of President Donald Trump, who recognized Guaidó as president. For his part, US Secretary of State Mike Pompeo agreed with Trump and called on Venezuelan military and security forces “to support democracy.” Also, some of the regional allies of the United States. They accompanied the decision of Trump against countries like Bolivia, Cuba, Mexico, Iran, China, Turkey, Syria and Russia that insist that they respect the elected authorities at the polls as is the case of Maduro, who won the presidential elections in May from the country.

But we must learn the lessons of the past and not be in the business of regime change or supporting coups—as we have in Chile, Guatemala, Brazil & the DR. The US has a long history of inappropriately intervening in Latin American nations; we must not go down that road again. 3/3

Washington must support the rule of law, fair elections and self-determination of the Venezuelan people, according to Senator Sanders.

With this opinion of Sander, Congressman Tulsi Gabbard agreed on Thursday, asking the Government of his country to let the people of Venezuela decide their future. “We do not want any other country to choose our leaders, so we should stop trying to choose their own,” Gabbard said on Twitter.

It is necessary to say that this statement was made using the twitter platform and in his first post the senator replicated the same negative media trends promoted by mass media over the world. That raise a lot of criticism from progressive forces in the US.

The Maduro government has waged a violent crackdown on Venezuelan civil society, violated the constitution by dissolving the National Assembly and was re-elected last year in an election many observers said was fraudulent. The economy is a disaster and millions are migrating. 1/3

Nicolás Maduro, who has the support of the people and the military of the Bolivarian country, and who began his second term on January 10, has highlighted that if the opposition wants to take power, it must achieve it through elections and not with the coup.