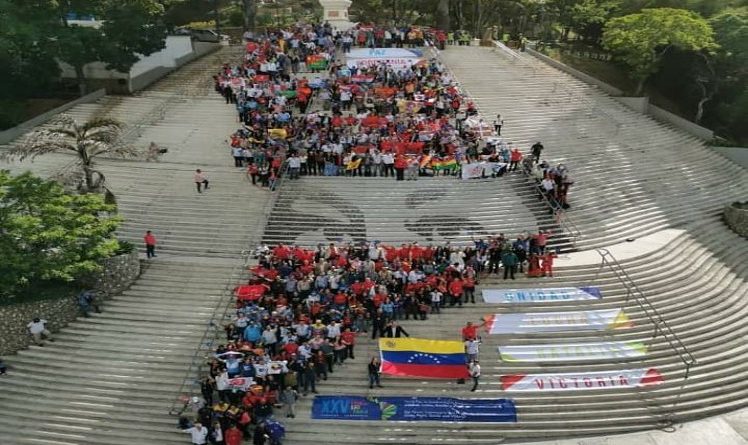 The Sao Paulo Forum (SPF) that took place in Caracas just ended on July 28 fittingly within the framework of remembering the 65th anniversary of the birth of Hugo Chavez with a display of affection and respect for the late Comandante with fireworks and all. By all accounts the SPF has been a politically successful event that followed a significant meeting of the Movement of Non-Aligned Countries (NAM) that concluded with a strong political declaration and support of 120 governments with the democratically elected Venezuelan government of Nicolas Maduro.

It is tiring to many to hear the corporate media dutifully repeat that 50 countries have recognized the unelected self-appointed Juan Guaidó. But they will never disclose publicly that, at least by the last count of the NAM meeting, 120 governments – almost two thirds of the United Nations member States – have recognized Nicolás Maduro as the legitimate president of Venezuela. Not coincidentally, the wealthiest of those 50 countries have a long history of colonialism, imperialism and exploitation that is producing their wealth. The poorest of them have a history of being colonized, dominated and exploited with the assent from the local oligarchy.

When the SPF started, the words of the NAM delegate, Foreign Minister of Palestine, Riad Malki, were still echoing in Venezuela, “today it is Venezuela that is under the siege of US imperialism, but tomorrow it will be Nicaragua, then Cuba and then all of us. I do not think they’ll stop at any time”.

The sabotage of the electric power system, likely a result of the Venezuelan rightwing violence that happened just before the beginning of the SPF, was also a “dark” (pun intended) reminder of the enemy within.

Despite that, the spirit of the Sao Paulo Forum was held high. The SPF was born in 1990 with two main purposes: on the one hand, to debate about the international state of affairs after the fall of the Berlin wall and the consequences of neoliberalism in the countries of Latin America and the Caribbean; and, on the other hand, to lay the groundwork for the creation of a progressive alliance of ideas and schools of thought where people, experts and analysts could offer reflections and analyses, and help develop social policies, economic, political and military strategies for the region with the working class as the centre. In 2019 the geopolitical context is different but the challenges for the revolutionary movement remain the same.

Since Hugo Chavez became president of Venezuela in 1999, Latin America and the Caribbean have made huge social advances to the point that the US administration “took notice” and proceeded to attack every advance perceived to be contrary to the interests of its imperial hegemony. By its own declaration the US government has targeted Venezuela, Cuba and Nicaragua for regime change.

With this backdrop, the SPF declaration, unequivocally titled “Unity of the peoples against imperialism”, recognizes that “the multifaceted reactionary offensive of US imperialism and the oligarchic rightwing allies has been deepened.” Therefore, “it is urgent to resume the [progressive] initiative more vigorously and effectively.” It further asserts, “Before the disintegrating plan of the right, let us counter with the integrating, sovereign and dignified plan of our peoples. In the face of free trade agreements, promoted by the United States, we strengthen sovereign integration projects such as CELAC, Alba-TCP, Mercosur and other popular and regional integration initiatives.”

Following that clear stand and goal for the region, the delegates at the SPF “Call for the promotion of the broadest global solidarity with the defense of the sovereignty and self-determination of the Venezuelan people and with their right to live in peace”, and “support the dialogue between the Bolivarian Government and the opposition promoted by the constitutional president Nicolás Maduro.”

Venezuela has given the exemplary step that unity is not only necessary, but it is possible.

Last July 19 ten political parties of the Venezuelan left – including the governing United Socialist Party of Venezuela (Partido Socialista Unido de Venezuela-PSUV) and the Communist Party of Venezuela – signed the “Caracas Manifesto for Peace, Sovereignty and the Prosperity of Our America”, an eight-page document that synthesized a consensus proposal to the revolutionary organizations at the SPF. Their main call to promote a unified plan to fight colonialism still active in Our America was accepted by the SPF delegates. [The expression “Our America” comes from the title of an essay written by Cuban revolutionary José Martí in 1891. It refers to that part of the continent we call today Latin America]

Three factors are important to keep in mind in order to gauge the relevance of the declaration of the SPF. One obvious factor is the content of the document. This has to be taken home by the delegates as a working document to be promoted among their supporters and allies, and to be put into practice in their respective settings with their own political perspective but with a single-minded goal. This is a major task when most of those delegates come from countries whose governments are responsible for implementing neoliberal policies that the revolutionary left must struggle to fight back daily.

Colombia comes to mind where FARC militants and social activists are been killed in the hundreds by the government-supported military militia even at a time when they try to compromise with a peace accord rejected by Ivan Duque. However, we remain confident and optimistic that meetings like the SPF are a boost to the revolutionary spirit and will contribute to strengthening resistance to the empire. The next such meeting that surely will see a large concurrence has been announced to take place in Havana, Cuba, November 1-3 under the title “Anti-Imperialist Solidarity Meeting for Democracy and Against Neoliberalism.”

The second factor of relevance of the SPF is that its declaration already represents the consensus of more than 720 delegates in attendance from dozens of leftist parties and social movements from about 32 countries. All of those delegates converging in Venezuela recognized in each other a comrade in the same struggle. There is no battlefield that is less important than another when you have an enemy like the US empire ambushing, scheming, attacking and intervening in every corner of the world.

Finally, the third factor, maybe less tangible but no less important, is that all delegates would return to their countries, bringing back the solidarity that the Venezuelan people, through their government, have given them daily for the last twenty years of Chavismo with their inspiring example of anti-imperialist struggle, resistance and sacrifice, showing that it is possible to confront the US empire and its minions, and win. Solidarity must be mutual.

It was expressed in many different ways at the Sao Paulo Forum that defending Venezuela is defending Our America.