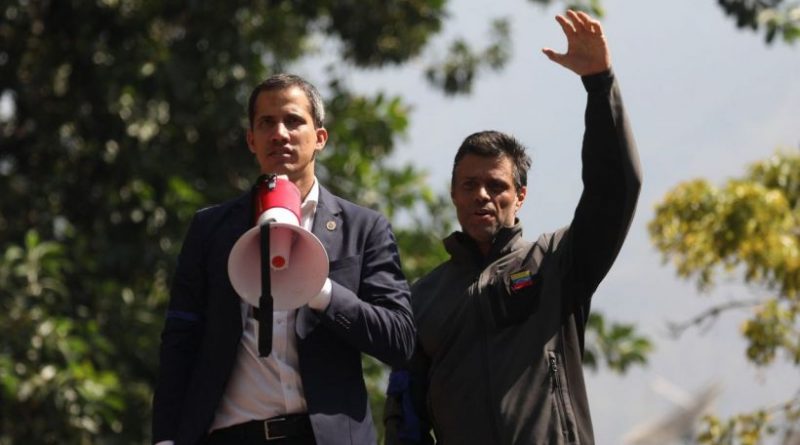 Juan Guaidó and Leopoldo López are together discredited by the corruption plot about “humanitarian aid” in Cúcuta (Photo: RTVE)

Many are the failed promises of this character that have come to represent the worst of anti-Chavismo in the last 20 years. In its effort not to assume responsibilities after each defeat, this sector of national politics continues to reap a negative political balance while its followers live adrift amid a war that also affects them.

Six months after being proclaimed interim president of Venezuela, Juan Guaidó did not achieve his goal of removing Nicolás Maduro from power. Moreover, he has promised the “definitive cessation of usurpation” on successive dates to the point that the ability to summon his followers has systematically diminished. His fanaticism, right up to sunrise today, does not understand very well what the plan is while his crisis of political orientation deepens.

Between January and mid-April of the current year there were seven calls (January 23, February 2, February 12, February 23, March 8, March 12, April 6 …).May 1 did not exceed a shy concentration of disappointed followers due to the failed coup d’etat of the previous day (April 30) led by the deputy of Popular Will and his mentor Leopoldo López.

The massive demonstration that overthrew the national government has not arrived, it is understood that it would be a violent and massive event that overflows the containment capacity of the security forces, in addition Chavismo would have to be demobilized. None of that has happened, not even with the two attacks on the electrical system, whose visible face is Senator Marco Rubio.

After having yielded to the Venezuelan government’s call to send representation to the dialogue tables in Barbados, he insisted that “he would attend to establish an exit negotiation to the dictatorship”. Even when the headliness of the anti-Chavista media talked about “setting the date and time” to this, the Popular Will member did not refer to dates, possibly giving up a method with no obvious results.

The promise of “humanitarian aid” was one of the failed promises of this politician of the 2007 generation, a whole spectacle that ended in a media scandal in addition to an investigation that began the Colombian prosecution for acts of corruption. For his part, Guaidó removed (after appointing them himself) Rosana Edith Barrera Castillo and Kevin Javier Rojas, teammates of his Popular Will party, who would have embezzled funds from such aid.

Orlando Avendaño, editor in chief of the PanAm Post anti-Chavista media, published on June 14 the article “Envoys of Guaidó appropriated funds for humanitarian aid in Colombia”, revealing a corruption scheme that included money diversion, embezzlement, fraud and threats in the handling of money destined for the then publicized humanitarian effort on the Colombian-Venezuelan border.

Through this media show, attempts were made to destabilize the national government by stimulating false flag operations, financing Venezuelan military “deserters.”

In a media play as a result of internal disputes between political sectors, Avendaño denounced how the Popular Will militants surrounded themselves with luxuries while “at least 60% of all food” donated by Guaidó’s allies “got damaged,” he also shared photos of bills and exhibited bewilderment at the silence of Guaidó, Leopoldo López and his press officer (Alberto Federico Ravell). Even more, the disappointment of the Venezuelan military who defected to Cúcuta and were presented as “heroes” who rebelled against Maduro.

Avendaño added that everyone was promised a stay in hotels, personal and familial support; medicine, food, hospital, “whatever they need”, with the promise that they would be comfortable, would have privileges and would be honored. They allegedly were 1,450 military (the actual figure was 700) staying in seven hotels, but “made a very bad impression in Cúcuta: prostitutes, alcohol and violence. They demanded and demanded”.***

3. “THE WAIT IS NOT ETERNAL”, BUT THE MILITARY COUP DID NOT COME

Another unfulfilled promise has been to add the Bolivarian National Armed Forces (FANB) to his plan to “cease usurpation”, the commitment of the military sector has been a defeat for anti-Chavismo and every time he summons them he does not get a meaningful response

In this context, the most noticeable collapse occurred in the early hours of April 30 when Juan Guaidó and Leopoldo López appeared surrounded by uniforms claiming to be inside the La Carlota air military base (they were in the Altamira bridge, adjacent to the base) in Caracas, from where they called for hundreds of thousands of civilians and military to join.

The most powerful strategy of the coup was the misinformation and confusion with which they disguised as a rebellion a demonstration with the military in which the rebels never managed to control said military installation.

The surprise element was that Guaido showed Leopoldo López as a sign that the “dictatorship” was being dismantled, arguing that the FANB was with them and that the “cessation of usurpation” was already beginning, so he demanded Venezuelans take to the streets. The reality was that Lopez managed to flee through the purchase of weakened wills and not through a rescue operation by his “loyal troops.”

Before capturing uniforms in other parts of the capital or the country, many of the military who originally accompanied this new assembly defected, stating that they had been deceived and all military vehicles (less than 10 anti-riot armored) that were used were returned to their source commands. They barely managed to mobilize a small group of protesters who ended up starting clashes with stones, Molotov bombs or firearms against the police.

Even though days before the deputy in question pressed the military under the argument that the wait was not “eternal” and that they could still join the opposition “in an honorable way”, the coup never came and everything was cleared up in record time.

Finally, Leopoldo López went into exile first in the Chilean embassy and then to the Spanish one, while the 20 or 30 uniformed soldiers who had rebelled were isolated at the Brazilian headquarters. Chavismo sealed the defeat of the coup by mobilizing hundreds of thousands of its followers to march more than 10 kilometers from a main highway in Caracas.

4. THE TIAR: COROLLARY OF AN INVASION THAT DOES NOT ARRIVE

As is known, this treaty, signed on September 2, 1947, is a mechanism signed by countries belonging to the OAS, where war is condemned and it is established that nations must seek peaceful solutions to their conflicts. In addition, the document includes the commitment that in the face of an armed attack by any State against one of the signatory nations “it will be considered as an attack against all American States”.

Days later, the Constitutional Chamber of the Supreme Court of Justice (TSJ) affirmed that the reinstatement of Venezuela to the TIAR, sanctioned by the AN in contempt, is a decision “void, devoid of validity and legal efficacy”.

Juan José Mendoza Jover, president of the Constitutional Chamber of the TSJ, indicated that any action taken within the framework of this treaty should be considered as an “act hostile to Venezuelan sovereignty” and an “aggression against the Venezuelan people and peace”.

The magistrate said, during a press conference, that the constitutional President is Nicolás Maduro and, therefore, the complaint made by Venezuela before the OAS and that was formalized on April 27, 2019 must be complied with. He also recalled that according to the Constitution is the President who is responsible for directing foreign relations and celebrating or ratifying international treaties. That is why they rejected this decision of the AN by enacting a law to adhere again to this inter-American treaty.

So far it would seem that subscribing the TIAR will guarantee the “Guaidó Plan” an alternative to continue managing the military intervention to which anti-Chavismo has aspired to bring to Venezuela (especially the most extreme faction on the right) from “La Salida” in 2014. However, voices within the same anti-Chavismo, such as that of former presidential candidate Henri Falcón, described the announcement as “irresponsible”.

Falcón declared that “the Inter-American Treaty of Reciprocal Assistance has no peaceful purposes or purposes. It is a military agreement without peaceful purposes that was born in the heat of the Cold War in 1947, even before the creation of NATO; that is why we reject this treaty for being obsolete and ineffective, whose approval would hinder any process of understanding,” he said. He added that “we must speak frankly to Venezuelans; enough of political irresponsibility and creating false expectations”.

Perhaps the most recent failed promise of this character has to do with a nerve center of Venezuelan sovereignty: national assets abroad.

Last January, Guaido announced the “transfer” of the country’s accounts abroad to “avoid looting,” he also said that a process to designate the board of directors of Citgo and PDVSA was initiated. “I have ordered the transfer of the accounts of the Republic to the control of the Venezuelan State and its legitimate authorities, to prevent the looting from continuing and to allocate them to satisfy the problems,” he said in a statement via twitter.

He indicated that the “operation and control” of these accounts would be subject to the approval of the NA in contempt to take “the necessary measures to ensure greater transparency” in the use of the funds. Such a measure would prevent the government of Nicolás Maduro “and his band” from making use of resources and “continuing to steal the money of Venezuelans.”

He also announced that a process was initiated to appoint a new directive of the state-owned oil company PDVSA and its subsidiary Citgo, which operates in the United States.

He said he was making this decision to reactivate the Venezuelan oil industry, which was going through a “dark moment” and to “ensure that Citgo remains Venezuelan.” At that time he did not announce appointments or set deadlines.

At the same time, the Trump administration reported sanctions to PDVSA to “avoid future diversions of assets from Venezuela” by the Maduro government and “keep those assets for the Venezuelan people”. The White House announced through the Secretary of the Treasury, Steven Mnuchin, that the route for the suspension of these sanctions would go through the “rapid transfer of control to the interim president”, in reference to Guaidó, or a “subsequent government” elected in democratic elections.

In recent days the La Tabla site has reported that the attorney for the “interim government” of Guaidó, the lawyer José Ignacio Hernández, was also a lawyer for Crystallex in the same trial for the seizure of Citgo assets for $ 1.4 billion during 2017. In the dispute between the Venezuelan State and the gold company, it has demanded since 2016 that CITGO’s assets be handed over by the case won at ICSID.

Hernández was hired by Crystallex to demonstrate the relationship of the Bolivarian Republic of Venezuela with Citgo.

La Tabla states that even though in November 2018, the constitutional government of Venezuela stopped the action against Citgo by agreeing with Crystallex – in an Ontario court – a payment plan from 2021 and the cancellation of 425 million dollars, everything changes with the self-proclamation of Guaidó: the kidnapping of Citgo is executed, leaving Hernández, the newly appointed “attorney”, as a counterpart in the Philadelphia court where the appeal of the action against the Venezuelan company was heard.

Guaidó’s breaches are not only due to the traditional incompetence of Venezuelan and international anti-Chavism, it is part of a systematic plan of deception in which the abandonment of politics and a national agenda is the fastest way to put everything into the hands of minority power sectors to control, without debate or elections. It is chaos as a strategy of domination to destroy when they cannot win.