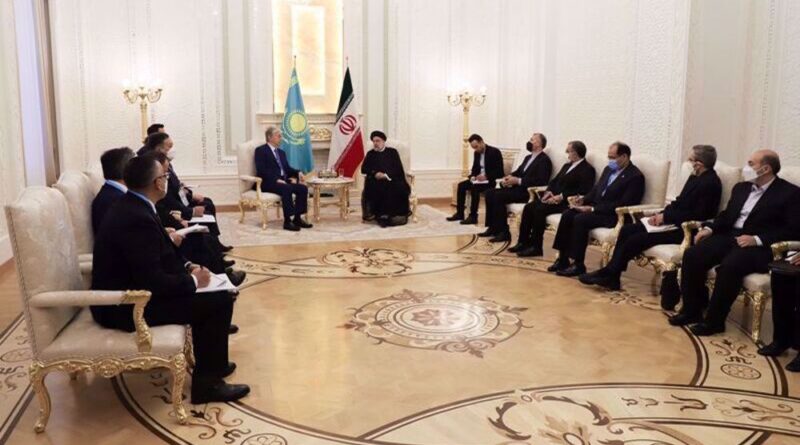 The Shanghai Cooperation Organization (SCO) has formally accepted Iran as the new member of the Eurasian political, economic, and security alliance at its 21st summit in Dushanbe.

“Perfectly pleased to announce that the permanent membership document of the Islamic Republic of Iran was approved by the leaders of the Shanghai Cooperation Organization in Dushanbe in the presence of our esteemed President,” Foreign Minister Hossein Amir-Abdollahian tweeted Friday.

“This strategic membership has an important impact on the process of comprehensive cooperation between Iran in line with the policy of neighborhood with and pivot to Asia,” he added.

The decision came as the 21st summit of the organization (SCO) opened in Dushanbe earlier in the day, with Chinese President Xi Jinping telling it that Iran will be accepted as a full member.

Leaders from eight member states and four observer states attended the annual summit in Tajikistan’s capital on Friday, with the Chinese leader addressing it virtually along with Russian, Indian and Mongolian presidents.

Addressing the summit, President Raeisi said the world today has entered a new era, when hegemony and unilateralism are declining.

“The international order is shifting towards multilateralism and redistribution of power in favor of independent states,” he said.

Raeisi called hegemonic powers as well as terrorism, extremism and separatism as immediate threats to global peace and security, targeting many countries, especially members and partners of the SCO.

“Maintaining and strengthening peace in this vast area is not a choice but a necessity,” the Iranian president said.

“I hope that the Shanghai Cooperation Organization which has succeeded in gaining a prominent regional and international position in a short period of time will continue its growing path,” he said.

Raeisi called cultural development as the first agenda of cooperation among civilized countries.

Cultural development, he said, “is a major part of the world’s cultural and spiritual treasury in Asia, and Asia has been the cradle of human civilization and its beating heart in China, India, Tajikistan and Iran”.

Asian culture and civilization, President Raeisi said, “has always been associated with harmony, patience, politeness, mutual respect and benevolence, and in a word, wisdom and justice”.

“The largest Abrahamic religions have been in Asia,” he said, as he called spirituality the eternal need of humanity and the lost treasure of today’s world.

“The crisis of spirituality is the foundation of all crises in the world. Monopolies, violence and human rights abuses are manifestations of the consequences of staying away from spirituality; Iran can play an important role in the development of cultural regionalism,” he said.

Raeisi touched on Iran’s vast potentials in terms of geopolitics, population, energy, transportation, manpower, and most importantly spirituality, culture and civilization, saying they can provide a significant impetus to strengthening the SCO and China’s Belt and Road Initiative (BRI) to link Asia, Europe and beyond.

He also touched on Iran’s crucial role in boosting connectivity through the International North–South Transport Corridor, a 7,200 km-long multi-mode network of ship, rail and road for freight transport between India to Russia and beyond.

“Iran is the link between these three infrastructure projects… Also, the large port of Chabahar in Iran has the capacity to become an exchange center for several members and neighboring countries in a special way and with the efforts of the members, turn to a symbol of cooperation in the Shanghai Cooperation Organization.”

“We always support Iran’s full participation in the activities of the Shanghai Cooperation Organization because Iran has played an important role in the Eurasian region and has a long-term positive cooperation with this organization,” he said.

Afghanistan also holds observer status at the SCO, but Russian Foreign Minister Sergei Lavrov said earlier this week that the Taliban had not been invited to observe proceedings in Dushanbe.

Putin said Friday the SCO now faces an urgent task to adopt “a coordinated line, taking into account the risks associated with the situation in Afghanistan after the escape of the United States and its NATO allies” from the country.

“We must use the capabilities of the Shanghai Cooperation Organization to rebuild Afghanistan and counter terrorism and extremism,” he said.

President Xi also said the international community must work together to meet the challenges facing Afghanistan.

“We must encourage Afghanistan to have an inclusive government. We must fight all forms of terrorism. Let’s try to turn Afghanistan into a path of peace and stability,” he said.

Raeisi meets with Kazakh counterpart
Earlier Friday, Raeisi described developments in Afghanistan as a common issue for all regional countries during a meeting with Kazakhstan’s President Kassym-Jomart Tokayev in Dushanbe.

“Afghanistan’s problems can only be solved through the formation of an inclusive government with the participation of all ethnicities and groups and avoidance of foreign meddling in its affairs to restore peace and stability to the country,” he said.

Stressing that Iran seeks the resolution of its nuclear issue through dialog, Raeisi said, “Of course, as it has previously been announced, we do not want negotiations for the sake of negotiations and are looking for talks that solve the problem and reach a conclusion.”

He further noted that Iran and Kazakhstan have diverse economic capacities to enhance their cooperation, saying, “Joint working groups can identify these capacities in the form of strategic relations in different fields and make them operational.”

Tokayev, for his part, said Kazakhstan is interested in strengthening its ties with the Islamic Republic, especially in the economic sector.

He said Iran’s Chabahar transit route can serve as the basis for developing economic relations between Iran and Central Asian countries.

The Kazakh president also said his country agrees with Iran on the formation of an inclusive government as the only solution to Afghanistan’s problems.

Working groups to boost economic ties with Armenia
Raeisi also met with Armenian Prime Minister Nikol Pashinyan and stressed the need for increasing the current level of economic relations between the neighbors.

“The formation of specialized working groups on economic issues, including in the field of energy exchange, transportation, joint production projects and financial exchanges, can be a good stimulus and a turning point in improving the level of interaction between the two countries,” he said.

Pashinyan, for his part, said expanding relations with neighboring states is one of the principles of Armenia’s foreign policy.

The fact that the priority of the Iranian government’s foreign policy is strengthening ties with its neighbors can mark a new fruitful chapter in bilateral cooperation, he pointed out.

The Armenian premier also described the role of the Islamic Republic in regional congruity as very constructive, saying, “Iran’s role in the region has always been stabilizing and we welcome Iran’s initiatives to resolve regional issues.”

Pashinyan welcomed Raeisi’s proposal to activate the Joint Commission for Economic Cooperation between the two countries and announced that he would instruct his ministers to remove obstacles to the implementation of agreements with Iran.

‘Sanctions have failed’
On Thursday night, the Iranian president met with his Uzbek counterpart, Shavkat Mirziyoyev and underlined the need for the removal of Western sanctions against Iran.

“Although these sanctions have not been able to stop Iran’s progress, Tehran is trying to have them removed,” Raeisi said.

Raeisi further reiterated Iran’s support for the formation of an inclusive Afghan government with the participation of all factions.

He also said that economic ties between Iran and Uzbekistan are lagging behind their political relations, adding Tehran wants enhanced ties with Tashkent.

Meeting with Iranian expats
Additionally on Thursday, Raeisi held talks with the Iranians residing in Tajikistan, telling them that they have an important role in expanding and deepening Iran’s relations with other countries.

Iran’s exports of goods and services to other countries, particularly neighbors, can be an important factor in enhancing the level of Tehran’s foreign relations, he said.