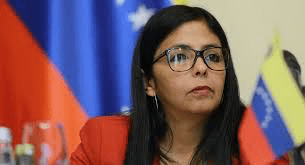 The Vice President of the Republic, Delcy Rodríguez, rejected on Friday, December 4, the comments issued by the President of Colombia, Iván Duque, about the visit of the Secretary of State of the United States (USA), Mike Pompeo, to Cartagena.

“When Ivan Duque’s ignorance about the history of Colombia and the great homeland becomes daily, we can not help but be astonished by the profound stultification of high state affairs, particularly concerning international relations,” she said.

Through her account on the social network Twitter, the official said that Duque “is excited alone and celebrates the actions of a politically unsuccessful and diminished group (the Lima Group), and join the submissive interference that violates the entire international legal system following the directions of Washington “.

Did the US give Colombia freedom?

Rodriguez also repudiated the historical inaccuracy of the tenant of the Casa de Nariño, who recently assured that it was thanks to the United States. that Colombia achieved independence from Spain.

“In what remains of his administration he won’t have time to learn the meaning and scope of the history of Colombia, or that it was Bolivar whose sword gave them freedom and not Captain America, but he could at least try to make his country the least violent and the world’s leading cocaine producer, “she wrote.

Likewise, Rodríguez exhorted Duque to “contemplate at his navel” and try to give social happiness to his people. “Avoid repeating the explosive formula of ignorance and criminality, today expressed in its eagerness to attack Venezuela and seek to undermine our sovereignty,” she said.