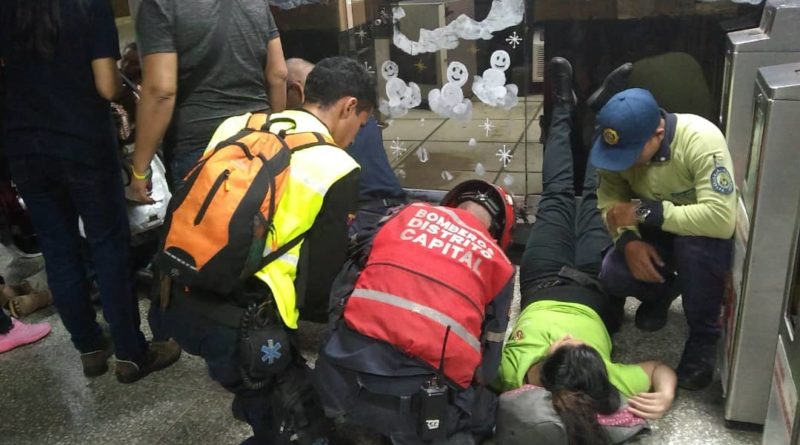 Six Venezuelans were injured and sent to health centers today, Wednesday December 11th, after what some media have called a derailing but most of the evidence indicates was a train failure that caused panic among riders, who decided to open the train doors by themselves with the risks involved in such a move.

The incident was first reporteded with some details by the Venezuelan 911 center on its twitter account with photos of affected users being treated in the Plaza Venezuela station.

Earlier the “Metro de Caracas” twitter account reported at 11:49 am about a failure between the Chacaito and the Hoyada stations and the putting into service of an alternate bus to deal with the contingency.

26 minutes later the Metro system reported about the resumption of regular service on the Line 1, the main line in the “Metro de Caracas” system.

At the time of this writing, there as not been an official incident report about the event and besides some media referring to a derailing, Orinoco Tribune analyzing all the coverage online on this incident did not find any video or photos showing a derailment. On the contrary, most of the customers’ twitter posts refer to a train failure.

Orinoco Tribune’s Editor, Jesus Rodriguez Espinoza, is a regular user of the transport system and he explained to the editorial team that because of US sanctions the Metro system has deteriorated drastically in recent years and that the supplemental private bus system is very inefficient, also affected by the economic crisis, and overloaded due to the lack of buses.

The supplemental private bus system charges a single user for short routs Bs. 2,000. (US$ .05) while a ticket for the metro system cost Bs. 40. which translates into 100 one way tickets costing US $1.

The differential in prices encourages users to choose the metro, most of them from humble origins that are the ones most affected by the economic crisis, and US sanctions, making the situation in the metro system more complicated.

“Overcrowded train cars without air conditioning is the norm in recent months, but since last week Line 1 of the metro system has been operation worse than ever, with trains taking at best between 15-20 minutes to show-up and most of the time so overcrowded that barely 2 or 3 users can get into each door,” said Jesus Rodriguez-Espinoza consulted on the issue.

Our editor confessed to us that most of the people inside a train are already psychologically affected by the delays, the overcrowded cars and most importantly, the lack of air conditioning of any kind that makes the whole commute a surreal experience.

“I’m almost sure that what happened today in the morning was a train without air conditioning (those represent like 70% of them in my experience) that got damaged traveling between stations and people in a desperate move decided to open the doors and take to the railway, with the danger it implies, but you have to understand that the situation for breathing inside a train is already terribly stressful, so I perfectly understand some people getting desperate and claustrophobic and heading to the railway on foot”, added our editor.

Orinoco Tribune’s editor added that later today he used the metro system and decided to shoot some videos for documentation. On his way back, the train got stopped between stations because of a failure and half the people on the train wanted at first to open the door, thankfully the other half of the passengers convinced them not to do so. “The train was packed with people, without air conditioning, stopped between stations and additionally ran out of lights, so you can imagine the desperation for some people,” he said.

“On the other hand, the train operator did not provide any kind of proper information making users feel abandoned, and pushing them to look for solutions by themselves. I understand we in Venezuela are passing though a difficult time but the Caracas metro system needs to improve, in the quality of train drivers, in the air conditioning system and in the number of trains, to properly serve Venezuelans that are already so hit by current state of affairs,” he concluded.