In our brave new age of hybrid warfare, corporate media play the role of ideological heavy artillery within the arsenal of Western imperialist powers. Day in and day out, “reputable” establishment outlets bombard progressive and/or anti-imperialist governments in the Global South with endless salvos of smears and libelous misrepresentations (e.g., FAIR.org, 5/23/18, 8/23/18, 4/11/19, 7/25/19).

The cumulative effect is to delegitimize any government that does not abide by Western dictates, justifying coups, murderous economic sanctions, proxy wars and even full-scale invasions. The recent US-sponsored coup d’etat in Bolivia is an instructive case study. In the leadup to Evo Morales’ military ouster, Western media routinely impugned the indigenous president’s democratic credentials, despite his having won re-election by a sizeable margin (FAIR.org, 11/5/19).

But corporate outlets have not been alone in attacking Morales. Progressive and alternative media in the Global North have long portrayed Bolivia’s deposed Movement Towards Socialism (MAS) government as repressive, pro-capitalist and anti-environment—all in the name of “left” critique. Regardless of the stated intention, the net result was to weaken already anemic opposition within Western imperial states to the destruction they inflict abroad.

Equivocating around the coup

In the wake of the November 10 coup, corporate journalists predictably played their part in gaslighting the public, presenting the fascist putsch as a “democratic transition” (FAIR.org, 11/11/19, 11/15/19).

Truly astonishing, however, was the response of Western progressive media, whom one might have expected to unequivocally denounce the coup and demand the immediate reinstatement of Evo Morales.

A dismaying number did not. 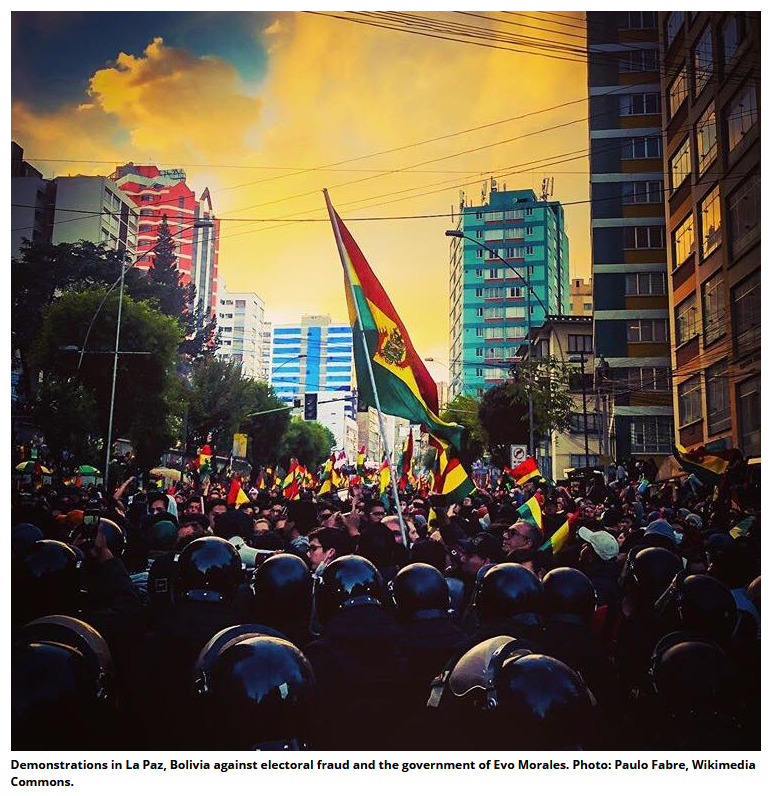 In the immediate aftermath of Morales’s ouster, Towards Freedom (11/11/19, 11/15/19, 11/16/19) published the perspectives of several Bolivian and Latin American intellectuals playing down the reality of a coup d’etat and drawing false equivalences between the Morales government and the fascist right. Other articles posted in days prior accused the government of fraud, justifying the coup to come (Towards Freedom, 11/8/19, 11/10/19). The Vermont-based outlet, with historic ties to the Non-Aligned Movement, declined to publish any alternative Bolivian points of view unambiguously opposing the coup.

Other progressive outlets correctly identified Morales’ overthrow as a coup, but felt compelled to question the indigenous leader’s democratic legitimacy for the sake of “nuance.”

While condemning the coup and rightly dismissing the baseless electoral fraud allegations, the editorial board of NACLA Report on the Americas (11/13/19) nevertheless refrained from voicing solidarity with Morales and the MAS party. Instead, the publication took MAS to task for the “slow erosion of progressive aspirations” and its failure to transform the “patriarchal and prebendal political system.” Even NACLA’s denunciation of the coup was at best lukewarm, citing “MAS’s own role and a history of political miscalculations,” before noting that “the unfolding pattern of rightist revanchism, the role of oligarchic forces and external actors, and the final arbitrating role played by the military, suggests that we are witnessing a coup.”

A subsequent article published by NACLA (10/15/19) preferred to debate whether Morales’ military ouster constituted a coup, failing to note the baseless character of the OAS’s fraud allegations and attributing the fascist right’s “racialized violence” to “polarization.” The authors, Linda Farthing and Olivia Arigho-Stiles, actually made the outlandish claim that assessing if Morales’ ouster was bad for democracy was “complicated.”

Meanwhile, a Verso Blog interview (11/15/19) with Forrest Hylton and Jeffrey Webber made no call for Morales’ democratic mandate to be respected, instead urging international leftists to “insist on the right of Bolivians to self-determination” without “refrain[ing] from criticism of Morales.”

Far from outliers, these editorial positions are very much par for the course in progressive media coverage of Bolivia over the past months and years.

The making of an ecocidal murderer

In the leadup to the October 20 election, many outlets drew or otherwise insinuated false equivalences between Morales and Brazilian ultra-right President Jair Bolsonaro in response to the tropical forest fires in both nations.

Despite rejecting such an equivalence, NACLA (8/30/19) nonetheless blamed the policies of both “extractivist governments” for “stoking destruction in the Amazon and beyond,” while casting Global North countries as having a responsibility to exert effective “pressure” in lieu of paying their historically accrued climate debt.

Others were less subtle. Writing for UK-based Novara Media (8/26/19), Claire Wordley explicitly compared the Morales government to Bolsonaro in Brazil, calling MAS policies “every bit as extractivist and damaging as those of the capitalists Morales claims to hate.” More damning, she cites Jhanisse Vaca-Daza, a Western-backed regime change operative, to disparage the Morales government’s handling of the fires. 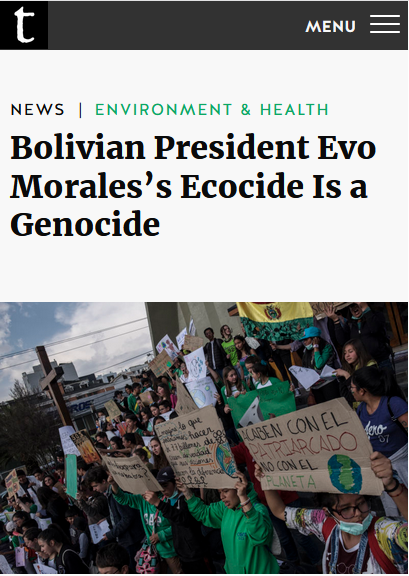 A piece in Truthout (9/26/19) took hyperbolic slander to new heights, likening Morales to Bolsonaro and accusing the Bolivian leader of “genocide.” “Evo Morales played green for a long-time, but his government is deeply colonial…like Bolsonaro in Brazil,” Manuela Picq wrote, going on to cite unnamed “Bolivians” who brand the indigenous president a “murderer of nature.” Picq offered no analysis concerning how Western leftists’ failure to shift imperialist political-economic relations has contributed to Global South countries’ ongoing dependence on extractive industries.

The “extractivist” critiques of Morales are hardly new, going back to his government’s controversial 2011 plan to build a highway through the Isiboro Secure Indigenous Territory and National Park (TIPNIS). As Federico Fuentes pointed out in Green Left Weekly (republished in NACLA, 5/21/14), the dominant extractivism/anti-extractivism frame of the conflict served to obscure the political and economic dimensions of imperialism.

While the highway did indeed engender important endogenous opposition—which was largely centered on the route, rather than the project per se—the main organization behind the protests, the Confederación de Pueblos Indígenas de Bolivia, was being financed by Washington and backed by the right-wing Santa Cruz oligarchy.

In a particularly revealing case, ROAR (11/3/14) detailed, among its laundry list of “authoritarian” MAS abuses, “obstructing the free functioning of…several NGOs that have sided with the TIPNIS protests,” but avoided any mention of foreign and local right-wing ties to those same NGOs.

This whitewashing of imperialist structure and agency ultimately allows Morales to be vulgarly caricatured as a two-faced “strongman” who “gives to the poor but takes from the environment” (In These Times, 8/27/15).

The “extractivist” critique circulated by many progressive outlets foregrounds a more generalized reproach of the MAS for failing to live up to its socialist discourse. 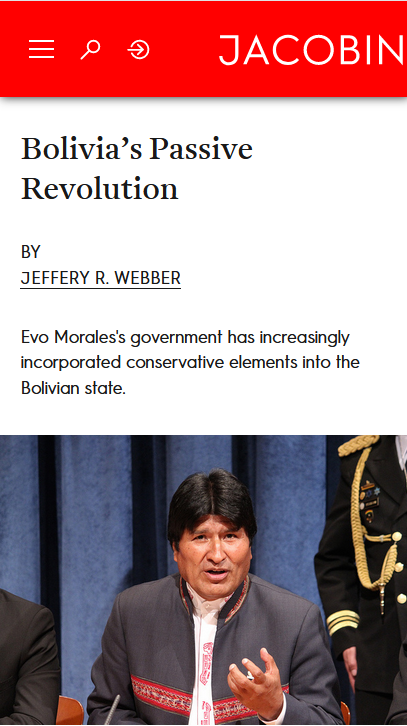 Writing in Jacobin (1/12/14; also see 10/29/15), Jeffrey Webber accused the MAS of running a “compensatory state,” whose legitimacy “conferred by relatively petty handouts runs on the blood of extraction.” Under this top-down “passive revolution,” the “repressive” state “co-opts and coerces…opposition…and builds an accompanying ideological apparatus to defend multinationals.”

Webber’s long-running argument that the legacy of Bolivia’s MAS government is “reconstituted neoliberalism” has been challenged by critics, who point to the shifting terrain of class forces under Morales.

Bracketing the empirical veracity of Webber’s claims, it is striking that he dedicates virtually no space to exploring the role Western imperial states play in reproducing Bolivia’s extractive model and constraining possibilities for its transcendence.

Rather, the focus is always on MAS’s allegedly insidious agency “on behalf of capital,” and scarcely ever on Western leftists’ own anti-imperialist impotence, which never appears as an independent variable in explaining the Global South’s revolutionary failings.

The political effect of such one-sided analysis is to effectively equate the “neoliberal” MAS with its right-wing opponents, given that, as Webber put it, “Morales has been a better night watchman over private property and financial affairs than the right could have hoped for.”

Such lines might come as a surprise to current readers of Jacobin, which has fiercely opposed the coup (e.g., 11/14/19, 11/18/19, 12/3/19), whose fascist brutality has thrown to the wind any notion of left/right equivalence. But by now, the damage is already done.

For all the current talk of a leftist resurgence in the Global North, it is a paradox that anti-imperialist movements are weaker now than they were at the height of the Iraq War 15 years ago.

It is undeniable that the absence of popular opposition to Western imperial interventions, from Libya and Syria to Haiti and Honduras, has paved the way for the coup in Bolivia and the ongoing onslaught against Venezuela.

It is likewise indisputable that Western progressive media coverage of the Morales government and its left-leaning counterparts in the region has not helped to repair this void of solidarity. This editorial stance is particularly troubling, given Morales’ outspoken international advocacy against climate change and for Palestinian liberation.

None of this is to proscribe criticism of Morales and the MAS. Indeed, in the context of places like Bolivia and Venezuela, the task of left-wing media is to produce critical, grassroots analysis of states and popular movements that is anti-imperialist in both content and form. That is, the contradictions endemic to the political process (e.g., the TIPNIS dispute) must be contextualized within the imperial parameters of the capitalist world-system. Moreover, Northern progressive outlets—no matter the intensity of their critiques of the state and political process—must stake a clear editorial position defending Global South governments against Western intervention.

The firm positions taken by Jeremy Corbyn and Bernie Sanders against the coup in Bolivia are a hopeful sign on the political front. The job of progressive media is to produce truly alternative journalism dedicated to effectively resisting empire.