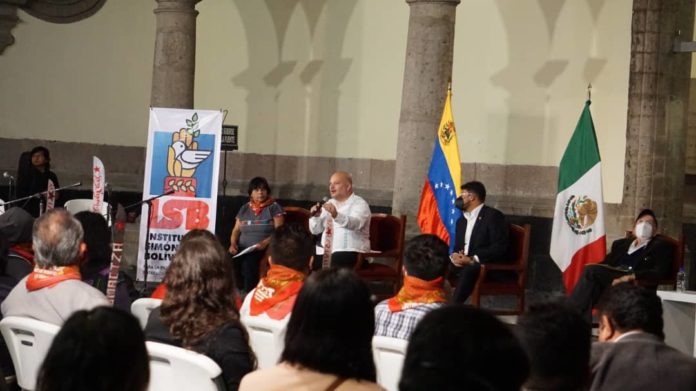 Held on Saturday, September 18, the successful Summit of Heads of State and Government of the Community of Latin American and Caribbean States (CELAC), at which Venezuela was the main promoter of a new stage in the regional cooperation of free peoples, will have a great impact for the future sovereignty of participating nations.

The sixth such highest-level CELAC summit strengthened Venezuela, and elicited the support from various Mexican social movements, who confirmed the importance of the union between Mexico and Venezuela.

In this sense, following the CELAC summit, the Meeting for Latin American and Caribbean Unity was held last Saturday with the participation of numerous social movements and political organizations from Mexico. Participants reiterated their solidarity with the Bolivarian Republic of Venezuela, and reaffirmed that the integration of these nations will generate great mutual benefits for all peoples involved.

The meeting was held at the Museum of Mexico City, and was attended by Rander Peña, Venezuelan Vice Minister for Foreign Affairs for Latin America, and Carlos Ron, president of the Simón Bolívar Institute for Peace and Solidarity among Peoples (ISB)—organizers of the event.

“The people of our America are increasingly united,” Carlos Ron stated through his Twitter account. “Solidarity strengthens us and together we will make the dreams of Bolívar and Zapata come true. Long live the unity of our America!”

Bolívar’s integrationist dream lives on
It is evident that Venezuela, the founding nation of CELAC, promoted by Commander Hugo Chávez and now strengthened by President Nicolás Maduro, came to the fore once again as a nation that keeps the ideals of the liberator Simón Bolívar alive.

“The unity of our peoples is not a mere chimera of men but an inexorable decree of destiny,” wrote Bolívar.

At the Meeting for Latin American and Caribbean Unity, Venezuelan Vice Minister Rander Peña emphasized that “we are the same nation, our American nation. We are the political operators of Bolívar and our historic mission is to conclude Bolívar’s dream of the unity of the Great Homeland. We will win.”

Likewise, Pamela López, from the Francisco Villa Popular Front, said: “A brotherly people of Venezuela, of that struggling, revolutionary, combative homeland… Our dreams are the dreams of Bolívar, Zamora, Robinson, and Chávez.”