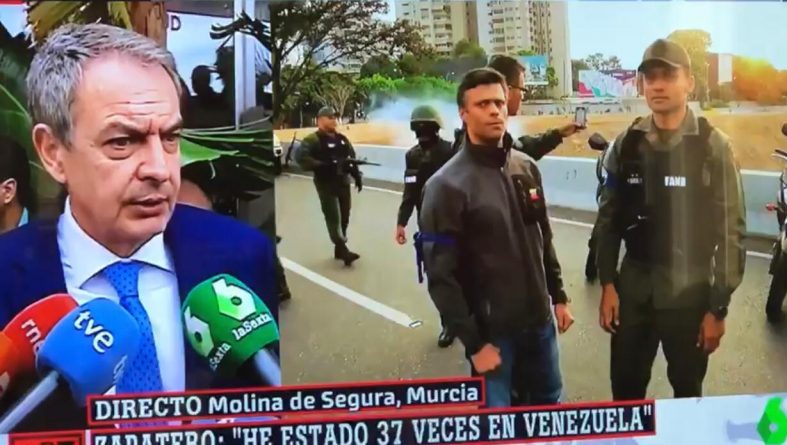 International News
May 9, 2019 orinocotribune coup d’etat, Negotiation the only option, Spain, US administration is a disaster, US Imperialism, Zapatero

“I feel sad to hear many opinions about Venezuela from people who have never been there,” the former Spanish Prime Minister said.

Former Prime Minister of Spain Jose Luis Rodriguez Zapatero defended Tuesday the option of “negotiation, dialogue, and agreement” regarding the situation in Venezuela “because any other alternative will not prosper.”

Zapatero also criticized United States president, Donald Trump, and his administration’s advisers for speaking of the Latin American country without having actually visited it, saying it is “very disturbing, very serious” some of the positions held by the United States administration “since President Trump made Venezuela a target.”

Of “the great advisers and strategists of the American administration who speak every day, how many know Venezuela? How many have spoken with a Venezuelan who is not just those who mark the line?”

Spain became entangled in the ongoing situation in Venezuela since Opposition leader Leopold Lopez sought refuge in the country’s embassy in Caracas April 30 after evading house arrest and appearing beside the self-proclaimed interim President Juan Guaido, in a video calling for a military uprising earlier that same day.

On Thursday, May 2, the Fifth Court of the Criminal Judicial District of ​​Caracas ordered his re-arrest and for the opposition figure to carry out the remainder of his sentence in the National Military Center at Ramo Verd.

That night, Spain’s acting Prime Minister Pedro Sanchez, whose Socialist Party (PSOE) won general elections last Sunday, announced his government has no plans at the moment to turn over the politician to Venezuelan authorities.

“We have the fundamental responsibility in a friendly country, brother, to bet for peace, not for force, for dialogue, not for confrontation, for aid and not for sanctions,” Zapatero said.

“These are my very deep convictions after having an intense understanding of the country, and I feel sad to hear many opinions about Venezuela from people who have never been there.”