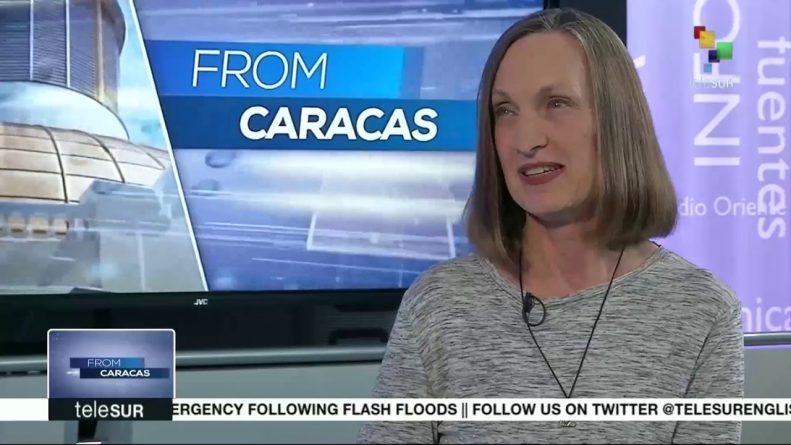 International News
May 9, 2019May 10, 2019 orinocotribune anti-imperialism, Campaign to End US & Canada Sanctions Against Venezuela, Delegation, Interview, Teri Mattson, US Solidarity

Last Monday, May the 6th, Orinoco Tribune interviewed Teri Mattson, a US activist with the “Campaign to End US & Canada Sanctions Against Venezuela”. We talked about her work and also about her impressions on the Venezuelan response to US imperialism and sanctions. This is going to be the first of three installments that we decided to do, given the length of the interview.

We encourage you to enjoy the video interview below but we also have highlighted the most important elements in it to facilitate its processing and use. In this first installment, we are talking about her background, her work in the campaign/delegations and her views on the situation in the Venezuelan embassy in Washington DC. The next two segments will focus on her analysis of the current situation in Venezuela, taking as guide a questionnaire prepared by Stan Smith, a US activist based in Chicago and in the Chicago-Alba Solidarity Committee.

Hi Teri, lets talk a bit about yourself first.

Are you really among the US activists that have traveled the most to Venezuela in recent years?
I never thought about it, I just do what I like to do and love to do, even though several activist organizations have been falling away in recent years. But I just felt that I have to keep coming to tell the story of the people, that is the story that needs to be told.

Can you talk a bit about your work with delegations?
Our last delegation came to Venezuela from the end of March until the beginning of April. 10 days put together with the help of the “Campaign to End US & Canada Sanctions Against Venezuela”, a working group from the Venezuela Strategy Group, a project from the Alliance for Global Justice (AFGJ.org).

The campaign was the result of 2 previous delegations in May 2018, organized by the Intrepid News Foundation, that brought eleven journalists down to cover the presidential elections in May and another delegation organized by Raul Burbano from Toronto (Common Frontiers) that brought several union leaders down. Then we combined both delegations to make it more attractive and easy to interact with more entities in Venezuela. We wanted to work against the sanctions, educate our citizens and push our governments to lift the sanctions.

Since then we have done several online campaigns, anti-Lima Group actions, webinars hosted by AFGJ, they allow us to use their platform, we have had Gregory Wilpert, SURES, Steve Ellner. We organized, and I have to thank Stan Smith in Chicago a lot, that helped us organize a North American speaking tour for Steve Ellner last fall. We had Steve Ellner on the road for six weeks speaking in Canada and the US – that was the largest project to date, and then this last delegation. The goal of the delegation was to bring activists to observe the impact of the sanctions and the response from the government and the community.

You are organizing a new delegation soon, right?
Yes, for June. We are still in the making, waiting to have a better input on the process to deal with the visas. We did had a nice process with this last delegation but we just need a timeline, 2 weeks, 4 weeks and after knowing that, we are going to be able to set the dates for the next delegation.

We are looking for activists to join us in these delegations that can produce work out here in Venezuela and back home. In our last delegation, we had 14 people from 4 countries (US, Costa Rica, Canada and Turkey) age 25 to 75. Every one produced work here and when they went back home. I believe I never traveled with such true activists, they are so focused on telling the story back home. We produce so much work that one of the delegates is working on a website to house all the work done by them.

Can we go deeper into the visas? I have a lot of friends, activists wondering how to come to Venezuela and are kind of stuck with the visa issue. I would tell them that one of the answers might be joining a delegation like yours. But give us some insights.

I encourage you to join our delegations we have a track record of securing visas, they can write us at: endvenezuelansanctions@gmail.com. We are working to come in June and I highly encourage you to contact us and help us create a diverse, hardcore group of activists that come and then share the experience back home about how people are responding to the sanctions, it is impressive how people are responding to the sanctions and that’s something I believe the US Department of State does not understand.

Do you think this will have an effect on public opinion in the US?
I believe that people don’t understand what is at stake if the embassy is taken by the opposition and the US government. It will be a coup; it will be no different than taking La Carlota Airbase here on April the 30th. These three principal groups, Code Pink, Answer Coalition and Popular Resistance, you can not give them enough credit and activist support for what they are doing and this is beyond politics, this is international law and diplomacy. What is going to happen to an Embassy of other governments in DC? What will be the threat to US embassies abroad, it is a potential precedent that could mean the unraveling of international law, the ramifications are horrifying.

What do you think is needed to be done to strength the work of these groups?
Education, people need to do blogging, videos like this, speaking engagements, radio interviews, media, media, media in all its form, youtube, facebook. It’s a real education need right now. And it goes beyond politics. This can be a threat to US embassies. I think -as indigenous people say- this is a “teaching moment” and we can not do enough of all forms of communications to educate people, especially US citizens, about what is at stake here, it is beyond politics.