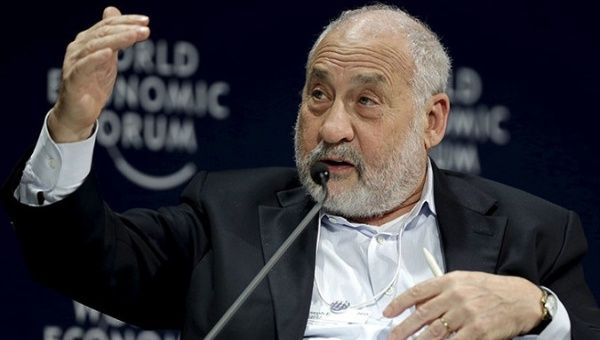 Only a few days after Argentina’s Congress voted to extend the Food and Nutrition Emergency (EAN) bill, professor and Nobel Prize winner in economics, Joseph Stiglitz, talked about the critical situation that the South American country faces as a consequence of a President Mauricio Macri’s “failed economic formula” of neoliberalism for the nation.

“Macri bet wrong and now the country is paying a high price for the mistake,” the 2001 Nobel Prize winner told Argentinian media when asked about the president’s economic policies since taking office in 2015.

“Argentina … and the bankers are the ones to blame, including the International Monetary Fund (IMF). They made the mistake of supplying those funds. Macri also committed several mistakes like eliminating exportation taxes to restore them later,” calculated the Columbia University professor.

“I warned that he (Macri) was committing a great risk by reducing export withholdings. This reported profits brought about the rise in food prices and the impoverishment of lots of workers,” said the former president of the World Bank.

According to a report by the National Institute of Statistics and Censuses (Indec) this week, Argentina’s unemployment rate is at its highest in 14 years, reaching 10.6 percent in the second quarter of this year. That translates to more than two million people being out of work. The number is much higher among women and youth.

Stiglitz is known for being critical of Macri’s economic plan since its inception. “I wrote an article when President Macri began to apply his economic policy in 2015. … Somehow, the administration was committed to the idea that there would be a fever of foreign funds coming into Argentina and that, with that, Macri could pay the huge sum of money he was borrowing with outrageously high interest rates” that, since 2017 run at around 65-70 percent.

During his own interview last Saturday, Mauricio Macri had no choice but to admit that citizens are still struggling to get ahead financially and they notice it on “their tables every day,” referring to an increased number of poor who can’t afford the high food costs across the nation. He tried to excuse himself by saying “more time is needed to achieve better results.”

By Monday of this week, three different opinion polls showed candidate Alberto Fernandez and vice presidential candidate, Cristina Fernandez are favorites to win the Oct. 27 elections by a wide margin.

“The primaries showed that Peronism is in a very favorable position for the October elections,” said Stiglizt, “which was an optimal solution after the 2001 and 2002 crisis when Néstor Kirchner (and) Cristina Fernández de Kirchner created more independence” from the large banks, said the world-reknowned United States economist.