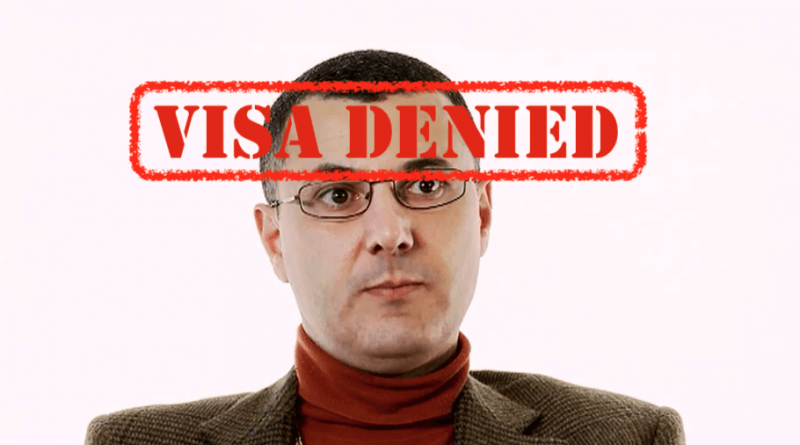 The co-founder of the BDS – boycott, divestment and sanctions – movement for Palestinian rights is unable to speak in the UK because the British government has failed to grant him a visa.

Omar Barghouti was due to participate in a fringe event during next week’s Labour Party conference, alongside senior party leaders and trade unionists.

“The solidarity movement is growing in strength…which is resulting in widespread attempts to silence Palestinian voices.”

But Omar will still be heard! pic.twitter.com/S1Zt2dosMT

“Omar Barghouti was scheduled to speak on nonviolent, ethically consistent strategies to counter Israel’s regime of oppression and to end international complicity with it,” the Palestine Solidarity Campaign stated Friday.

But “due to an unexplained, abnormal delay in issuing his visa,” Barghouti will speak by video instead.

PSC said that the “unprecedented delay in processing Barghouti’s travel visa application by the British government is part and parcel of the growing efforts by Israel and its allies to suppress Palestinian voices and the movements for Palestinan rights.”

Earlier this year, the Trump administration barred Barghouti from traveling to the US for a speaking tour, a move denounced by civil liberties defenders as censorship.

It appears that the UK, often the junior partner of the US, is following suit.

“They fear our shining a light of truth that reveals their lies. They dread our tireless quest for freedom, justice and equality,” Barghouti said.

“We shall continue to fight their McCarthyism and repression and persist in pursuit of our UN-stipulated rights, including self-determination and the return of our ethnically cleansed refugees.”

Widening crackdown
A crackdown on the free speech of Palestinian rights supporters is taking place in other countries allied with Israel, especially Germany, France and Austria.

Australia has also banned or placed obstacles in the way of speakers coming to talk about Palestinian rights, including this writer.

In an alarming development this week, the US Department of Education has ordered the University of North Carolina at Chapel Hill and Duke University to make changes to their federally funded joint Middle East studies program.

According to The New York Times, this blatant interference in academic freedom reflects the agenda of Kenneth Marcus, a longtime Israel lobbyist appointed to the Department of Education by the Trump administration.

Government officials say the curriculum spends too much time casting Muslims in a positive light.

“With its actions, the department entered the debate over Israel and Palestinians that has roiled campuses around the country,” the newspaper added.

“They really want to send the message that if you want to criticize Israel, then the federal government is going to look very closely at your entire program and micromanage it to death,” Zoha Khalili, a lawyer with civil rights group Palestine Legal, told the Times.

The US and the other countries censoring speech on Palestine all purport to hold freedom of expression as a fundamental value.

Often acts of censorship are rationalized with the so-called IHRA definition of anti-Semitism, which Israel and its lobby have pressured institutions and governments to adopt.

The IHRA definition conflates criticism of Zionism, Israel’s racist state ideology, on the one hand, with anti-Jewish bigotry, on the other.

Zionism is racist because among other things it holds that Palestinians expelled from their towns and villages when Israel was created in 1948 should not be allowed to come home just because they are not Jewish.

The IHRA definition cynically weaponizes concern about anti-Semitism to muzzle people who believe Palestinians should be liberated from decades of Israeli military occupation, settler colonialism and apartheid.

EU cooperates with smear and sabotage
Earlier this year, Gilad Erdan took credit on behalf of Israel for the passage of anti-BDS laws in 27 US states.

Erdan, the strategic affairs minister, is in charge of Israel’s covert campaign to smear and sabotage lawful civil society activism in support of Palestinian rights around the world.

Many of Israel’s dirty tricks were revealed in Al Jazeera’s leaked undercover documentary The Lobby–USA.

Next week, for instance, Katharina von Schnurbein, the EU official charged with combating anti-Semitism, is set to speak alongside Erdan at the European Parliament.

The event is a blatant attempt to equate criticism of Israel’s violations of Palestinian rights with anti-Semitism:

Remember when EU’s @kschnurbein used to pretend that her concern about anti-Semitism wasn’t a mask for smearing and censoring support for Palestine. Now she’s taken the mask off. pic.twitter.com/lmexgwK9ch

Von Schnurbein, who is a favorite of Brussels Israel lobby groups, has been a major proponent of the IHRA definition.

While the attempted silencing of Omar Barghouti is an act of the British government, this year’s Labour conference has been marred by other instances of censorship.

The Electronic Intifada’s Asa Winstanley has been arbitrarily banned from covering the conference by party officials, a measure condemned by fellow reporters and by the National Union of Journalists.

Sam Knights, a campaigner with the climate action group Extinction Rebellion, also revealed Thursday that British police have banned him from attending the Labour Party conference, despite being an elected delegate:

The police have decided to ban me from the Labour Party Conference, despite the fact I am an elected delegate.

I suspect this is because of my work with Extinction Rebellion. If so, it has worrying implications for democracy and the policing of peaceful protest.

The TUC resolution also pledged to oppose any proposed solution for Palestinians “not based on international law and UN resolutions recognizing their collective rights to self-determination and to return to their homes.”