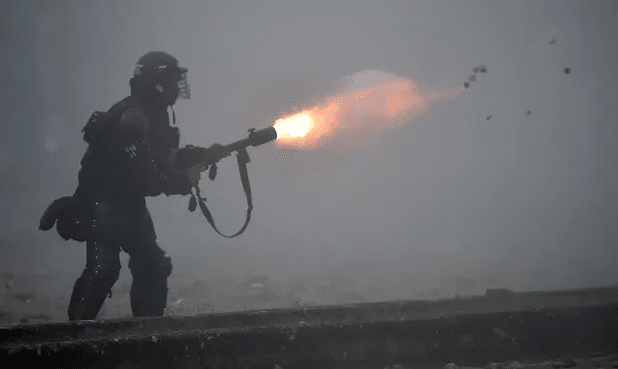 Colombians are still looking for 91 people reported missing during the national strike and demonstrations which began on April 28 and have left at least 20 dead, according to a report delivered this Monday by the Ombudsman’s Office to the Inter-American Commission on Human Rights (IACHR), an organization dependent on the infamous Organization of American States (OAS). Other independent organizations have reported at least 65 deaths in the protests, most of them at the hands of the police.

“The organization has received 783 reports of people who could not been located, of which 317 were discarded… for having repeated names, because the people were located, or because they lacked sufficient information,” said the ombudsperson, Carlos Camargo.

Colombia’s Ombudsman’s Office sent the report of 466 cases to the General Prosecutor’s Office, he added. The prosecutor’s office did not admit 153 of the cases, and the Urgent Search Mechanism remains active in 91 of these cases.

Several human rights organization have reported the discoveries of demonstrators’ and activists’ corpses, found in rivers or empty lots, and others have denounced mass graves. Colombia has a tradition of human rights violations that most of the time are left unacknowledged because of the submission of its government to US interests.

Regarding the deaths during the strike and demonstrations, Camargo informed the IACHR that 58 have been reported, and the Prosecutor’s Office has determined that in only 20 cases there is sufficient evidence to show that “these alleged homicides occurred in the context of public demonstrations,” without clearly specifying the parameters required for this determination.

RELATED CONTENT: Judge Suspends use of Venom Against Colombians in Popayan City

The visit of the IACHR team, which arrived in Colombia on Sunday night and will only begin its work-related activities on Tuesday, was requested by social organizations and the opposition, given the human rights crisis faced by civilians enduring bloody repression by Colombia’s authorities, led by President Iván Duque.

It will be a brief trip of just three days, in which the president of the IACHR, Antonia Urrejola, and several senior officials of that body will meet with “various representative sectors of Colombian society,” both governmental and from civil society.

A group from the mission will travel to Cali, Popayán, Tuluá and Buga, in the southwest of the country, where the most worrying scenes have been seen during the strike and demonstrations.

Regarding gender violence, the defender expressed his concern especially about the cases of sexual violence that have been reported to him.

“113 acts of gender-based violence against women and people with diverse sexual orientations and gender identities have been identified during the demonstrations. Of these cases, one corresponds to violence by protesters against a police patrol boat, and 112 correspond to violence by police officers,” said the defender.

The mobilizations, which are entering their seventh week, began on April 28, opposing the economic and social policies of President Iván Duque. Duque’s administration has failed to establish sincere negotiations with the leaders of the National Strike Committee.

ESMAD’s performance in the crosshairs
With the arrival of the IACHR mission, one of the major concerns must be the actions of the Mobile Anti-Riot Squad (ESMAD), an organization that has received the highest number of complaints for human rights violations and aggressions committed against protesters during strike actions and demonstrations.

At the time when the government of Iván Duque announced what the opposition called a “cosmetic” police reform, the ESMAD once again starred in another episode featuring its violent excesses, in an act linked to mobilizations, in which demonstrators were honoring the memory of one of the victims.

Members of social organizations and civilians of the city of Cali reported that on Saturday, June 5, they were attacked while commemorating the late Cristian Delgadillo Sánchez, a young man murdered the day before in El Paso de Aguante.

According to the information provided, at 6:50 p.m. local time in the Loma de la Dignidad community, a tribute to the young victim began, when the Mobile Anti-Riot Squad (ESMAD) suddenly charged in, firing shotguns at attendees.

“At 6:50 pm in La Loma de la Dignidad—before the National Strike known as La Loma de la Cruz—inhabitants of the sector and population of Cali gathered to observe the wake and memorialize Cristian Delgadillo Sánchez, one of the frontline leaders from this community assassinated by security forces last night,” a statement detailed.

Attendees of the memorial service indicated that they were even persecuted once they reached their homes; that there were arrests, searches, intimidation, and attacks by members of the police. Three others were arrested, including a minor.

According to human rights organizations, 15 people have been murdered in Cali, while another 120 people are missing. Police and military repression at points of resistance in the city are only increasing.