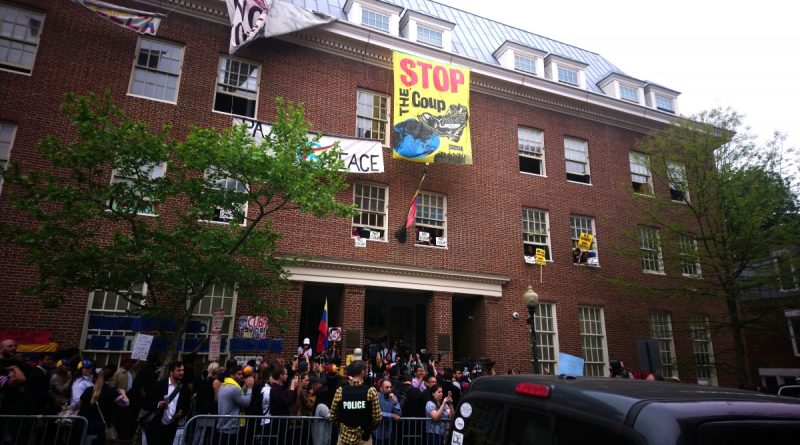 International Opinion
May 4, 2019May 4, 2019 orinocotribune Defending the Embassy in DC, US Imperialism, US Solidarity, vienna convention

The escalating US war against the constitutional government of Venezuela and the assault on its diplomatic missions undermines the Vienna Convention (1) on Diplomatic Relations (Articles 44 and 45), substitutes coercion for diplomacy, and threatens to ignite a civil war in this Bolivarian Republic. The constitutional government of President Nicholas Maduro has sole authority over its diplomatic missions and is recognized by the United Nations. There is therefore no legal basis for a de-facto ambassador nominated unilaterally by self-declared president Juan Guaidó to seize the Embassy of Venezuela in Washington DC.

Siege to the Venezuelan Embassy

In particular, COHA denounces the siege currently underway against the Venezuelan Embassy in Washington DC, organized by supporters of Juan Guaidó, some of whom have been physically aggressive against a group of peace activists and civil society members who are trying to protect this piece of Venezuela territory. The DC Police, the Secret Service and Federal Police agents have stood by while some Guaidó supporters vandalized the building, blocked delivery of food and medicine, and physically assaulted peace activists and journalists. In one especially egregious case, rather than facilitate the delivery of food and sanitary supplies, the police arrested Ariel Gold, member of Code Pink, for “throwing a missile” of bread to blockaded embassy defenders in need of food. At this writing police have allowed the delivery of a food package by rope and pulley to the defenders inside the building.

To the Office of the DC Mayor: allow food and medicine

The office of the Mayor of DC and the State Department should immediately facilitate the entry of food and medicine to the embassy defenders and prevent any further physical assaults by Guaidó supporters on peace activists. COHA urges that these authorities begin an immediate inter-agency review of the policies and procedures of the various agencies involved in policing the embassy premises and its vicinity with a view to ensuring public safety and respect for the Vienna Convention on Diplomatic Relations.

Many Guaidó activists have taunted embassy protectors with racial, homophobic, and misogynist slurs, reminding observers of the class and race divide in Venezuela. The late President Hugo Chávez was often attacked by some sectors of the right wing opposition for his skin color as well as his Indigenous and Afro-descendant heritage. The expressions of such hatred and bigotry, well documented both inside Venezuela and now outside the Embassy in Washington DC, only confirms that the defenders of a peaceful resolution to the Venezuelan crisis, the critics of a possible US military intervention, and the US citizens protecting the Venezuelan Embassy based on the Vienna Convention, are on the right side of history.

The Monroe Doctrine is back

By filling the foreign policy swamp with the most reactionary trio that Washington can muster—Mike Pompeo, John Bolton, and Elliot Abrams—the Trump administration has deployed the two most egregious features of the infamous Monroe Doctrine: imperialist aggression aimed at overthrowing non-compliant governments, and the attempt to install obedient client governments willing to implement the neoliberal gospel.

The declaration by National Security Advisor, John Bolton, that “the Monroe Doctrine is alive and well” is a deep insult to the hundreds of millions of people in the Global South who insist on respect for their sovereignty. It is complicity with such blatant arrogance within the Organization of American States (OAS) that has undermined the organization’s standing as a regional body and reduced it to a subservient arm of the State Department. The wounds of mass murder and marginalization suffered at the hands of US backed regimes of the past century have not yet healed as Washington and its right wing allies appear all too ready to open new ones.

A new coup attempt has failed

Venezuela is now in the front line of the latest US drive to reimpose its hegemony on the region. The US led coup attempt this week by the self proclaimed interim president of Venezuela, Juan Guaidó, have failed despite the chorus of tweets by its champions in Washington and Bogotá; the uniform propaganda show of mainstream media; and the all too eager complicity of right wing leaders in the region. These regime change collaborators feign humanitarian concern even as they cheer on crippling US sanctions that have led to the death of thousands of Venezuelans and place thousands more in jeopardy.

The chance of a popular mobilization inside Venezuela on behalf of a US led war against the Bolivarian Republic is null. The carnage and ashes left by “liberating” military invasions of Iraq and Libya do not inspire a widespread desire to imitate these debacles. Washington’s latest regime change war has only further polarized Venezuelan society and supported the most hard line elements of the right wing opposition. Given the historic memory of the repression suffered by the poor and marginalized during the fourth republic, the popular sectors, including those critical of the Maduro administration, have good reason to view the coup mongers with growing suspicion and circle the wagons around their government. And there are moderate forces in the opposition who prefer political struggle over outside military intervention.

COHA calls for a peaceful resolution and respect for Venezuelan sovereignty

There is another, more rational and benevolent way forward. The Council on Hemispheric Affairs supports a dialogue without conditions, mediated by mutually agreed upon parties, to resolve political differences among Venezuelans. We repudiate the Trump administration’s pretension to be concerned about the humanitarian crisis in Venezuela given it has sends thousands of Central American children, forcibly separated from their immigrant parents, to internment facilities in the United States. We maintain that the actual motivation for the prevailing US policy towards Latin America, and Venezuela in particular, is the control of natural resources and oil, the curtailment of Chinese and Russian influence, and the complete reversal of the trend towards regional independence and integration.

The US has placed all options on the table except the dialogue that has been proposed by the Secretary General of the UN, Mexico, Uruguay, and the Vatican. COHA urges the Trump administration to change course and adopt a foreign policy that recognizes the existence of a multipolar world, respects the sovereign equality of all nations, and engages in mutually beneficial trade in function of advancing human life in harmony with the biosphere. It is not too late to step back from the brink of a regional disaster. It is still feasible to give peace, diplomacy, and cooperation a chance.

(1) Articles of Vienna Convention on Diplomatic Relations of 1961

Article 44 – The receiving State must, even in case of armed conflict, grant facilities in order to enable persons enjoying privileges and immunities, other than nationals of the receiving State, and members of the families of such persons irrespective of their nationality, to leave at the earliest possible moment. It must, in particular, in case of need, place at their disposal the necessary means of transport for themselves and their property.