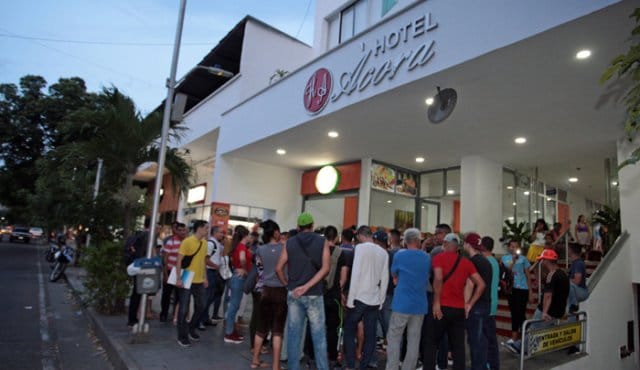 On Friday afternoon, the suspension of the lodging services received by Venezuelan military deserters became official due to the fact that food payments are not up to date. According to an official statement from the hotel, the management immediately requested they check-out from rooms occupied by the ex-officers of the Armed Forces of Venezuela and the Bolivarian National Police.

To date, it is presumed that there is a balance of more than 60 million pesos , which has been in default for 10 days.

Around 5:30 in the afternoon, 120 people were evicted, including several children “who do not know what they are going to eat and where they can sleep,” said Ronal Jimenez, former member of the Bolivarian National Guard (GNB).

He also made a call to Juan Guaidó, whom the newspaper identified as the “current president of the National Assembly of Venezuela,” so that he “responds for himself in this situation and offers prompt solutions to these affected families.”

On February 23, groups supported by Juan Guaidó tried to forcibly introduce trucks with alleged “humanitarian aid” through the border between Colombia and Venezuela, while a group of Venezuelan military and officials deserted to Colombia, where Guaidó was, to affirm that they were loyal to him, he met with them and promised them full support.

Shortly after, it was learned that these Venezuelan military deserters remained in several hotels in Colombia, in “refugee” status, supported by the Bogota office of the United Nations Agency for Refugees (UNHCR). However, on several occasions they have denounced Juan Guaidó for leaving them adrift and not knowing what to do.