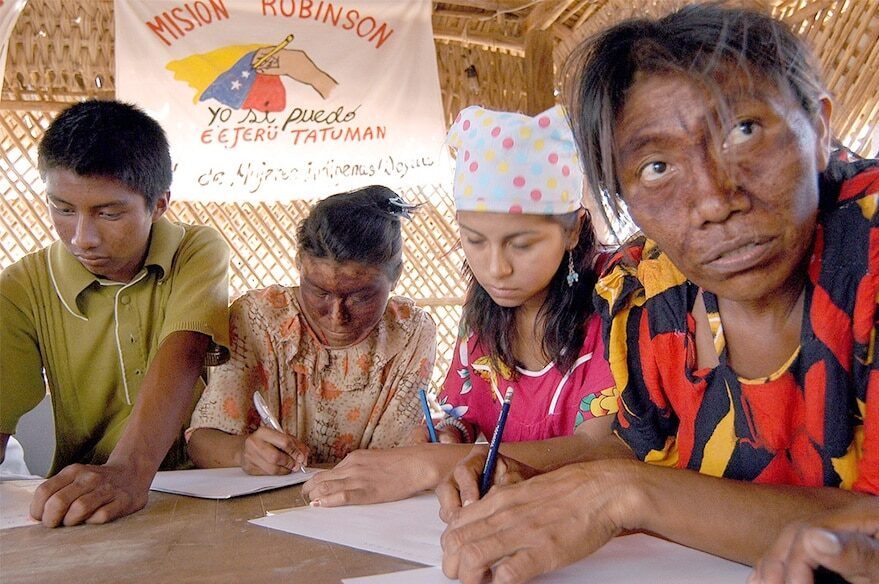 Liberating Literacy: Indigenous people of the Wayuu nation learn to read and write with the Robinson mission in Casusai, Alta Guajira Parish, in the northern-most state of Zulia, Venezuela. Photo: Franklin Reyes/J Rebelde/CC

As educators across the globe have begun to examine alternative forms of schooling post-covid, it is time to examine the revolutionary, egalitarian and innovative Bolivarian education system, writes Logan Williams.

The merits of the Bolivarian system are plain to see through the country having one of the highest educational progress rates in Latin America and a truly comprehensive system funded by the Venezuelan government led by the United Socialist Party of Venezuela.

In order to understand the Venezuelan education system, it is necessary to examine both its foundations and the reality of education under the illegal US sanctions.

The foundations of the alternative
In the decades preceding the successful election of Hugo Chavez, education in Venezuela was not prioritised.

Governments effectively abandoned education in the rural and working-class areas for the exploitation of oil in the 1920s and later prioritised a neoliberal economic shift which saw government spending on education fall by 37 per cent between 1990-96 to only $118 dollars per capita.

The ideological shift in the 1990s saw the introduction of school registration fees which reinforced the barriers restricting the ability of working-class and rural students to enter education.

As a result of this neglect, throughout the late 20th and early 21st centuries, the governments led by Chavez prioritised the reintroduction of educating the rural and working classes largely due to the movement’s ideological founder Simon Bolivar, who argued that “a people advance in step with their education.”

The prioritisation of education within the Chavista governments is reflected in Chavez’s core belief that the eradication of illiteracy was a key weapon in the fight to eradicate poverty in Venezuela.

As well as Chavez’s ideological motivations it is possible to identify a more personal motivation through his reflections upon his own schooling in the countryside. Chavez stated: “I never wanted to move away from my home, but I had to go … Those who didn’t leave stayed behind and stagnated.”

The first of these missions was Mission Robinson I, named in honour of Simon Bolivar’s teacher and close friend Simon Rodriguez whose own education project was formed “to colonise America with its own inhabitants” to avoid the American peoples becoming enslaved to a foreign power as they once had under the Spanish.

Mission Robinson I sought to address illiteracy as the Chavista government identified it was a key factor in a life of poverty. In order to tackle the issue of illiteracy, the Venezuelan government invited hundreds of Cuban literacy experts to design and deliver a programme to teach citizens to read and write utilising a system of corresponding numbers. By 2004, over 1.3 million citizens had taken part and in late 2005 Unesco declared Venezuela as being illiteracy-free due to Mission Robinson I.

Following the successful completion of Mission Robinson I, Chavez and his education minister Aristobulo Isturiz launched Mission Robinson II which sought to teach citizens everything they required to pass grade six (British Year 6) within a two-year time frame.

Most of Mission Robinson II was taught by Venezuelan volunteers and through government-provided resources such as personal libraries, TV and VCR sets within each home.

The success of these programmes was identified by human rights group Provea which stated “both missions comply with the state’s obligations to guarantee the right to education and within this, to fight illiteracy. The project awakened a popular motivation and participation across society as can be seen following the Cuba Literacy Campaign of 1961.”

This project sought to reform existing schools in inner cities and build new ones in communities long neglected by previous neoliberal governments. The project was formed around six key ideals which has since formed the bedrock of Bolivarian schooling. These ideals are as follows:

They seek to transform the children into participatory, critical and integrated individuals who identify with their national identity.

They are participatory and democratic where all members of the school community participate in the decision-making and execution of school activities. They are at the service of the community

They promote social justice and thus seek to ensure that all children complete their schooling.

They are examples of permanent pedagogical renovation, where the school is converted into a space for the dialogue of knowledge and cultural productions.

They fight against educational exclusion.

The six key ideals were formed to ensure that education was harmonized with the world of work and creation of a “new man” for a new Bolivarian society.

This revolution in schooling saw a transition away from an education system based around “encyclopaedic knowledge that is based in memorisation of details which are removed from the mentality of the adolescents and from their real-life problems,” towards one based on “integration, assuming that science is a means of making sense of the problems of society and never an end of its own.”

These key pedagogical reforms in turn transformed the day-to-day provision of lessons into one formed on the bedrock of practical applications rather than narrow disciplinary fields.

This would see the tuition of humanities and science instead of history and geography and biology, chemistry and physics respectively.

These changes reflect a revolutionary departure from Western educational methods in favour of a system designed explicitly to meet the needs of contemporary Venezuela.

It is logical therefore for British educators, progressives, socialists and trade unionists alike to seek to learn lessons from the Bolivarian education system due to its role in defeating illiteracy and tackling poverty throughout the Venezuelan population.

We must continue to build support for the people of Venezuela and opposition to the cruel and illegal sanctions inflicted by the US government which have caused the deaths of thousands of Venezuelans by building and supporting the Venezuela Solidarity Campaign as well as urging our trade union branches to affiliate and support initiatives launched by progressives in the region.

Logan Williams is an activist in the NEU and Venezuela Solidarity Campaign — www.venezuelasolidarity.co.uk.