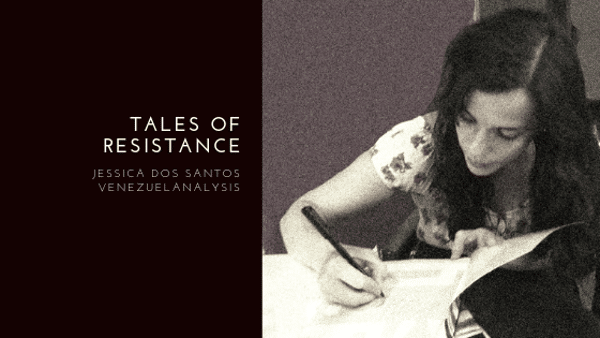 In the first installment of her monthly “Tales of Resistance” column, Jessica Dos Santos reflects on the upcoming Workers’ Day and the struggles of the working class in the current crisis.

We are coming up on Workers’ Day (May 1st), and a myriad of thoughts cross my mind: “if you don’t work, you don’t eat,” my father used to say; “but there must be something wrong with work, or the rich would have hoarded it,” popular comedian Cantinflas fired; “slavery was never abolished, it was only extended to include all the colors,” Bukowski stressed.

I started working when I was 17, shortly after entering university. My first jobs were the typical ones for a teenage student: call center, store clerk, etc. However, shortly before graduating, I started working as a journalist in a Venezuelan state institution.

The Venezuelan minimum wage at the time was Bsf 1,548.21 (some US $360 at the official exchange rate). But my salary as a writer was considerably higher and allowed me to live comfortably, lend a hand to my parents, and save.

In fact, two years later, I bought my first car, brand new, by pooling together my Christmas bonuses, some savings and a small bank loan.

“Now we have to struggle to enforce it,” Chávez said, hours before traveling to Havana for a new round of radiation therapy.

This new legislation shortened the work week from 44 to 40 hours, with two continuous days of rest, established double pay in case of unjustified dismissal and the calculation of severance/settlements on the basis of the last salary, eliminated outsourcing and subcontracting, put in place firing freezes, extended pre- and post-natal parental leave, among many other achievements that were truly historical for the Venezuelan working class (and which were achieved amidst strong controversy).

Today, seven years later, I’m still at the same institution, but now as press chief. Nevertheless, my salary does not reach ten dollars (at the official exchange rate) and is the equivalent of, roughly, one kilo of meat and an two and a half dozen of eggs.

And to buy a single tire for my poor car I estimate it would require me setting aside my entire salary for at least a year. But, after 12 months, it would be ten times more expensive.

Thus, I’ve seen how, little by little, the public sector has collapsed. There is a huge wave of resignations, that nobody talks about but which everyone is aware of. These workers have received settlements, after years and years of work, that won’t even buy them a pair of shoes.

A few days ago I saw a study that claimed that there are 300 to 400 daily resignations, and even some trade unions estimate a loss of about 5 million formal job posts in both public and private sectors.

I don’t know if these numbers are right or not, but I am very familiar with having to do the work of several people because job posts are left vacant and nobody wants to fill them, or worse: they are taken by people with no qualifications or experience, which might not be too serious in a media outlet (although trying to teach 30 year-old sloths how to properly build sentences is trickier than it sounds), but it’s bound to be in key state enterprises such as PDVSA (oil) or CORPOELEC (electricity).

In the meantime, those of us who stay on, feeling exploited, ask ourselves day after day: what the fuck am I doing here?

In truth there is no easy answer: salaries don’t amount to much, food bonuses even less so, settlements are ridiculous, savings plans make no sense as they are destroyed by hyperinflation, medical insurance plans are a joke (they don’t even cover a doctor’s appointment), transportation is often not assured, and the delivery of subsidized food bags is far from reliable.

Furthermore, this sort of “new benefit” (subsidized food) has become, in many cases, a kind of blackmail, as if workers had to be eternally grateful for what is an emergency measure, as opposed to trying to regain dignified working conditions and a salary that would at least allow them to buy food.

Conversely, faced with the apparent inability to change the picture, many of us (I would dare say almost everyone) have opted to change our work lives.

That’s why many left the country to do stuff they hate, being paid miserably simply for being Venezuelan, but supporting relatives by sending remittances; others, like me, carry on in their regular jobs but doing several things at the same time (the famous “tigers” [Translator’s note: “killing tigers” is a common Venezuelan expression for “moonlighting”]) and being underpaid (designers are often paid $400 for a job, but a Venezuelan can be paid $20 because “at the black market rate that’s enough,” “there will be some other Venezuelan willing to do it,” etc.), some have gone into the informal market (selling or re-selling anything through Whatsapp statuses), etc.

In fact, I’m convinced that this is one of the reasons why we have been able to withstand the economic crisis without a social explosion taking place. But how long can this last?

Meanwhile, many supposed “working class” Chavista leaders spend their whole time parading their round bellies on TV, invite us to march on May 1st, and even blame us for “not defending the salary increases that the president gives us in the midst of the economic war and international aggression.”

Actually, that’s something I’ve never understood, but what does this entail? How are people supposed to defend their salary increases? Do we loot shops when they hike prices, or tip over private buses who charge whatever they feel like? Do we kill each other? What are we supposed to do when denouncing pays no dividends and authorities leave you in the middle of the ring to fend for yourself?

Others, euphemism enthusiasts, ask us to adopt a “resilient” lifestyle, but what more do we need to adapt to?

Lately, May 1sts in Venezuela have often been debates about how many cake crumbs we get as workers, when the real issue is that for several years we have not had a birthday.

So, why the fuck do I, and millions of others, go on working in the public sector? Some make a simple calculation: in the private sector one can earn more but the difference vanishes when buying (at non-subsidized prices) the staples that come in the state food bags. Others, including myself, at a certain moment conceived of our work activities and the state (which grew ever stronger) as spaces for political militancy, and we now struggle to let go of that idea. Others need to feel they have “labor stability,” despite it not corresponding to a decent wage. Very few think long term (people can retire after 30 years in the public sector), and I think I’m part of a huge majority that still holds hope that this will all get better, despite everyday life suggesting otherwise.