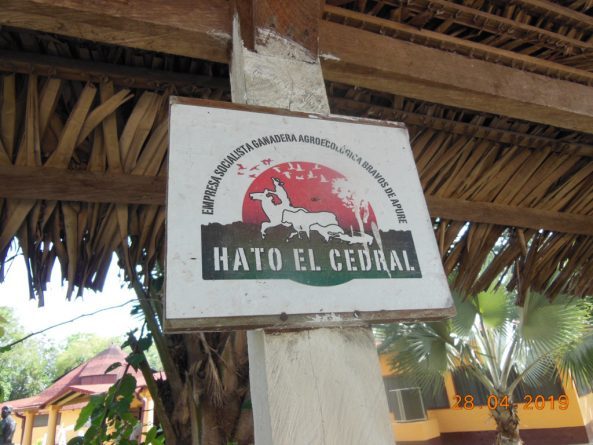 This weekend we went through the Hato El Cedral, in Mantecal via Elorza, in the Apure state. As of September 17, 2008, officially, its more than 50 thousand hectares were renamed Agroecological Livestock Farming Company Bravos de Apure, SA. Ten days before, Commander Chávez made his Aló, President number 320 there.

More than ten years later, there is still El Cedral, a state-owned company, operating according to the purpose for which it was created, with its double-purpose cattle and its more than 50,000 hectares of rice planted. In addition, as an ideal space for ecological tourism, with its more than 400 species of birds, with its Orinoco caiman (once in danger of extinction), with its drool and its snakes (boas, anacondas, among others), its frogs, bats, raccoons, anteaters, with their freshwater dolphins, pumas, jaguars, cunagüaros and ounces, with their deer and their thousands of chigüires. There are, of course, its more than 250 workers who do everything possible, and also a school for their children and their three meals, part of which is supplied by the José Cornelio Muñoz dairy plant, a Agroindustrial Social Production Unit (UPSA) located in Mantecal, inactive since 2016 and recovered by the Portuguesa Governor in 2018.

And there, in the anteroom, a bust of Commander Chávez, turned into part of that beautiful landscape, as a tribute and reminder of the man who raised the need to multiply the experiences of “social property administered by the State”, as commented in that Aló, President, a historical document on which we must return every so often, to achieve our economic independence, our food security and sovereignty.

Of course it is possible. Who has doubts, that happens through El Cedral? In general, Apure demonstrates that one can stand up to the privatizing drive that ravages other points of the national geography, and succeed in the attempt.