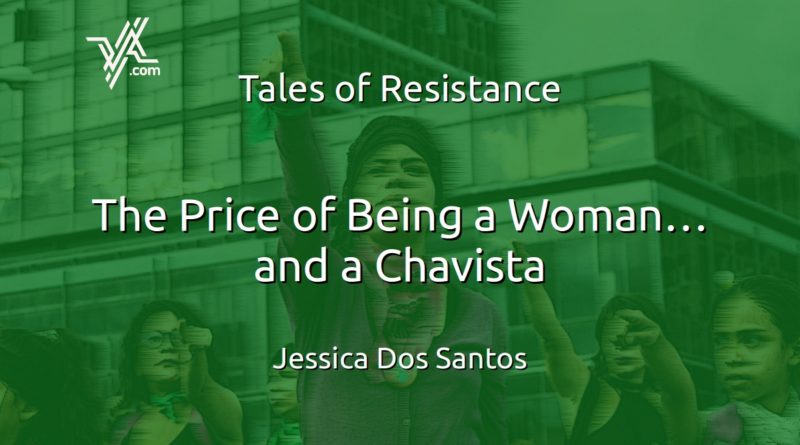 Towards the end of the year, women’s movements took to the streets in Latin America to denounce that 3,529 women were victims of femicide across the continent in 2018, and the numbers for 2019 look to be much worse.

Each country had its particularities. In Venezuela, as always, the political-social axis was the dominant one. Venezuelan women have not had it easy in recent years. They are the ones tasked with heading, economically and logistically, the majority of Venezuelan homes. Not only that, around 70 percent of political structures at the grassroots level are led and mostly made up of women.

Women have put their hearts and souls into the Chavista political project in every corner of Venezuela. And, at the same time, they are the ones bearing the brunt of this painful mix generated by criminal US sanctions and the Venezuelan government’s inadequate response.

We are the ones who have been dealing with the toughest situations. In the beginning, the endless queues to get food and personal hygiene products. Then, the double and triple work shifts (at home and outside) to be able to provide for the young ones as well as the old folks we have to care for. Amidst all of that, there is also the deterioration of the healthcare system, from the shortage of birth control and medicines all the way to the lottery that is giving birth. We also have to take into account the women who are lured into migrating, only to end up in the hands of sex trafficking networks. And, to top it all off, there is the increase in gender violence.

The economic dependence of some women, which has only worsened with the crisis, raises the fear of denouncing violence or having to separate from partners. On the other hand, many men, who apparently were not violent, have shown their true face when confronted with the perceived impotence of not being able to economically sustain their families.

“When a man feels his masculine vocation affected, he feels he cannot fulfill what he believes to be his duty. Faced with this impotence, his answer is arrogance and violence. We have seen that, alongside an economic crisis, there is always an increase in gender violence,” explains Claudia Martínez, Argentine psychologist, as part of a UN Campaign Against Gender Violence.

For example, my neighbor’s daughter has a little girl with autism. Because of her, she withstands all kinds of abuse from her partner, who threatens to leave her and not send a single Bolivar for the little girl’s medicine and therapy. In spite of having a job, she knows she would not be able to afford all of that on her own, and so she endures everything in silence.

That is why, in different Venezuelan cities, we saw more than just Chavista and opposition mobilizations at the end of November. Among the former there were different rallies: some organized by groups identified with the ruling PSUV party, others by Chavista feminist movements which are less institutional and more independent.

These more autonomous groups have demanded that the Venezuelan state present official statistics regarding gender violence, answer for the more than 140 femicides registered (by popular organizations) in 2019, and remove indolent public officials, who hinder and obstruct judicial processes, from their posts.

A couple of years ago, for instance, a man approached me while I jogged in El Ávila National Park. He pointed a gun at me and told me to lie face down. He stole my belongings, kicked me on the ribs and made several sadistic threats, until a large family approached and scared him off. I was probably saved from being raped. I remember that when I went to file a report, the officer asked me some five times: “And why didn’t you take the cable car up to the park? Who goes jogging during the holidays? Perhaps you knew the guy?” Until he finally refused to file the report.

In the midst of these demonstrations, a video of a performance by a Chilean collective called “Las Tesis” went viral on social media across Latin America, including in Venezuela. The performance is a choreography where, facing forward, in formation and with a firm voice, dozens of women chant lyrics that read “and it wasn’t my fault, it wasn’t where I was, nor how I was dressed. You are the rapist…”

Some feminist movements decided to replicate the choreography on the streets of Caracas, adapting the message to the Venezuelan context. Straightaway, they were faced with a violent barrage from certain sectors that have oppressed women. Waves of insults and threats against feminists ensued. They were called ugly, insignificant, lesbians, gross and, basically, Chavistas, because in the opposition’s worldview (which is reflected in anti-government media) these are all synonyms.

So that is the cherry on top of the cake. Besides heroically bearing the brunt of sanctions, putting our bodies on the line to defend and advance this Revolution, even with a state that does not offer solutions, we have also had to deal with the intolerance and political fascism from our opponents. Ironically, this also includes women and supposedly “revolutionary” men.

In Venezuela, in the first eight days of 2020 alone, feminist movements have denounced at least eight femicides, around one a day. They have reiterated their call for the state to create new policies to effectively protect women, or simply to enforce the laws that are already in place.

At the end of the day, these facts point towards the same conclusion: the main enemy of feminism is the capitalist system. Perhaps when the latter is abolished, the former will not be needed any more. It is the same struggle.

Featured image: Venezuelan women have borne the brunt of the crisis while also sustaining the Revolution. Jessica Dos Santos looks at feminist struggles in the latest delivery of “Tales of Resistance” (Photo by Mariana Cano, modified)