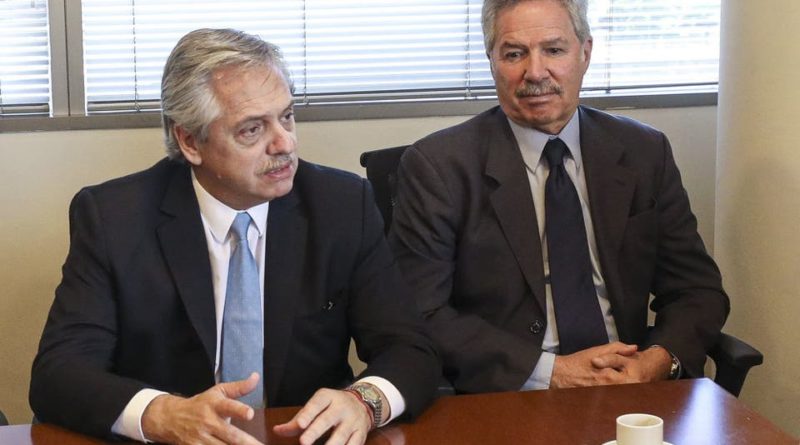 Is this a policy of carrot and stick as the saying goes? Amidst a very singular government strategy in matters of foreign affairs, Argentinean President Alberto Fernandez has taken a seemingly contradictory direction concerning the progressive definitions of many of his voters. Though he initially gave clear progressive signs by offering refuge and solidarity to former president Evo Morales, who is persecuted by the de facto Bolivian dictatorship, a bad step was taken by Fernandez’s Foreign Minister Felipe Sola with his negative attitude towards the Venezuelan Government headed by Nicolas Maduro, a country that has shown strong support to Argentina.

Argentina then issued a wishy-washy statement on the assassination committed by U.S. President Donald Trump and his Pentagon’s henchmen, murdering Iranian Lieutenant General Qassem Soleimani. Instead of strongly condemning the crime staged by U.S. state terrorism, the Argentinian government decided to support the idea of the “two evils” and to call them to a hypothetical dialog. Such a statement appeared while evident pressure was coming from the Trump administration, reminding Argentina of its obligations with the International Monetary Fund (IMF) and advising to pay without further delay an illegitimate debt contracted by the former Mauricio Macri administration.

The most alarming thing to date about this dangerous skid concerning who are the friends and who are the enemies and maintaining an independent foreign policy, especially when it is linked to people facing oppression, is President Fernandez’s choice of making his first official destination the terrorist state of Israel. This is precisely the place where the Palestinian people are not only suffering the occupation of their territory but are subject to the cruelest repression in contemporary history, besides the one caused by Nazism and the European fascism. The meaning of Israel for occupied Palestine should never be ignored by anyone and especially one coordinating a country’s international relations by looking away from the history and plight of the Palestinian people.

Using our imagination and thinking if the tables were turned, we could wonder how the Argentinian people while suffering the terror of the dictatorship from 1976 to 1983 felt when their country was visited by friendly presidents from other countries who with their very presence helped soften the atrocities committed daily by soldiers, concentration and extermination camps, the corpses of imprisoned people thrown into La Plata river, forced disappearances. There is no exaggeration in this statement. Let’s just look at Zionist soldiers attacking with tanks; armored vehicles, aircrafts; soldiers heavily armed; the houses and bodies of people living packed together and besieged in the Gaza Strip; or refugee camps in the West Bank; or the violent actions taken by usurper settlers. Not to mention the thousands of Palestinians, many of them children, languishing in Israeli prisons.

Information released last Thursday notes that President Fernandez is going to travel to take part on the Fifth World Holocaust Forum marking the 75th anniversary of the liberation of Auschwitz and International Holocaust Remembrance Day. The encounter is going to be held January 23, 2020 at Yad Vashem in Jerusalem.

The invitation, which arrived recently, is signed by the corrupt and genocide Israeli Prime Minister Benjamin Netanyahu. It is precisely Netanyahu, who refused to attend Fernandez’s inauguration because he had invited a Venezuelan representative and Ecuador’s former president Rafael Correa. Such an insulting gesture from people who have no moral authority to judge Latin American leaders who undertook revolutionary processes would have been enough to step back from the Israeli administration. However, this presidential trip seems to reveal that Argentina’s President is trying to act “correctly” with those who, together with the United States, are pushing the world to the brink of war given their warmongering activities against Syria, Iraq, Iran, Palestine, and other Arab countries.

Evidently, this trip is not mere coincidence. Scores of countries around the world would have been good choices for the initial presidential visit to prove an open-mindedness. Nevertheless, President Fernandez is giving precise information about the direction of Argentina’s international relations policy. No matter how many excuses they give, truth is the only reality and this step throws overboard his initial good actions.