In March 2017, ahead of Ecuador’s second-round presidential election, CEPR reported that Florida-based shell companies linked to then-candidate Guillermo Lasso owned 144 properties in Broward and Miami-Dade counties valued at over $30 million. In that election, voters approved a referendum barring politicians and civil servants from holding assets in tax havens and giving them one year to divest or transfer their holdings. Though Florida is not included among the list of tax havens, it is considered a “low tax jurisdiction,” which authorities will handle on a case-by-case basis.

Four years later, Ecuador is again headed to a second-round presidential vote, with Lasso on the ballot. While additional layers of anonymity have been introduced in order to further hide ownership, a review of corporate and real estate records in Florida shows the Lasso-linked shell companies’ holdings have increased since 2017, raising questions over the legality of Lasso’s candidacy. Ironically, Lasso is competing in the April 11 run-off vote against Andrés Arauz, one of the original architects of Ecuador’s tax haven reforms.

In 2009, according to the Florida Division of Corporations, Guillermo E. Lasso — the candidate’s son — registered an LLC in Florida called Nora Investment US. From June 2009 to December 2010, the holding company purchased 59 properties, which it still owns today, in Florida’s Broward County according to publicly available records. The purchases, mostly condos, totaled $5.7 million.

But this was just the beginning. In 2011, two new directors were added to Nora Investment US: Miguel Macias and Euvenia Touriz. Both were previously officials at Banco Guayaquil, and both are currently listed as directors at the Banisi bank in Panama that is owned by Lasso. From 2011 to 2013, Lasso (the candidate’s son), Macias, and Touriz registered 10 LLCs in Florida in which they are all listed as directors. The additional LLCs were also used to purchase properties in Florida.

In August 2014, following Ecuador’s implementation of new regulations concerning offshore assets, Lasso’s son’s name was systematically removed as a director from all 10 companies, the public records show. But Macias and Touriz continued to open additional holding companies. It is important to note that while LLCs list directors, the so-called beneficial owner — or true owner — is concealed.

In June 2017, Macias and Touriz — Lasso associates from prior shell companies and banks — were listed as officers on a newly created shell company, DEBLEN USA 1, LLC. Two months later, the company purchased a luxury home in Miami for $1.475 million. There is no record of a mortgage, suggesting that the purchase was likely made in cash. Beginning in 2018, however, both Macias and Touriz appeared to be systematically removed as officers from the vast majority of the shell companies’ corporate records.

In 2020, most of the previously identified shell companies went through myriad changes: deactivations, reactivations, officer resignations, name changes, mergers, and dissolutions. Many of the companies had their names changed within a week of their dissolution. All but four of the property-holding companies associated with Lasso have now been merged into new entities. In total, we identified 23 active companies registered in Florida, including DEBLEN USA 1, mentioned above, associated with Lasso’s business associates. 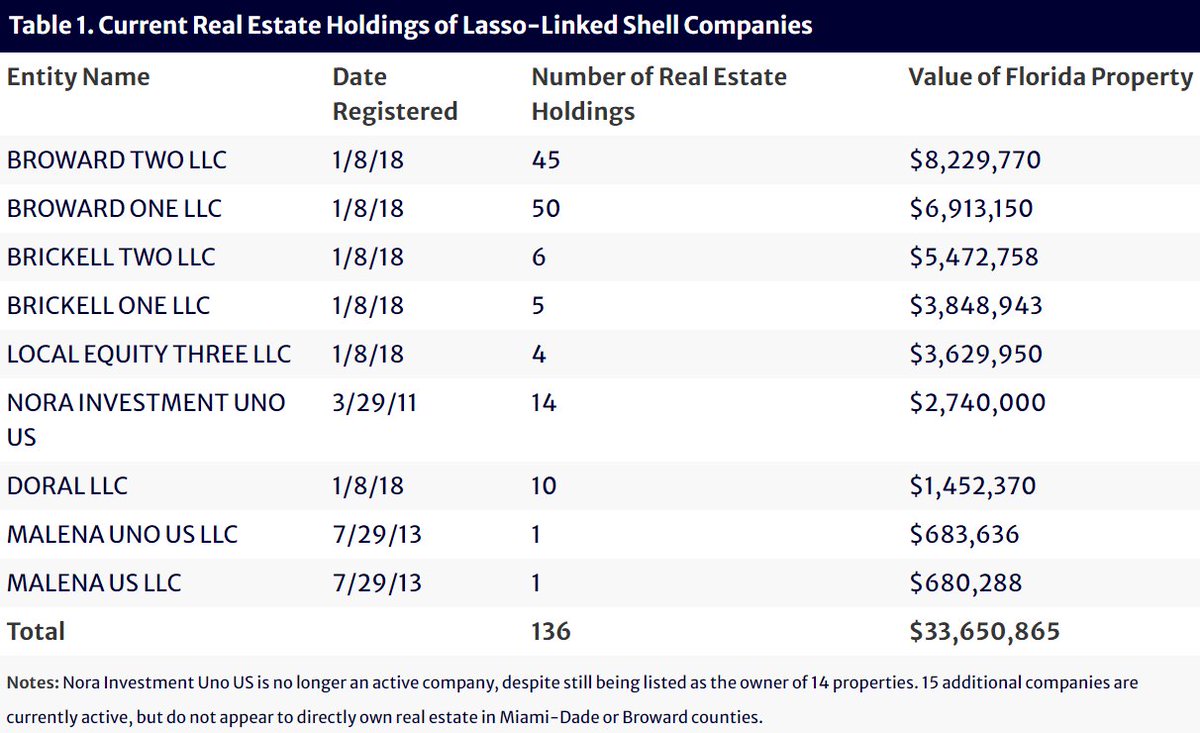 For example, in 2016, “BILL INVESTMENT CINCO US, LLC,” with Macias and Touriz listed as officers, purchased a home in Fort Lauderdale, Florida for $2.2 million. The owner of that home is now listed as “LOCAL EQUITY THREE LLC.” Corporate records show that Macias signed the paperwork authorizing the merger of a number of older shell companies into LOCAL EQUITY THREE LLC and a handful of other corporations. But instead of Macias, the manager of the company is listed as “DIRECT MANAGEMENT LLC.” On some of the other companies, the manager is listed as “FREEDOM MANAGEMENT LLC.” Instead of individuals, the only officers of these newly created companies are additional shell companies. Every one of the merged companies now list one of these two companies as the manager.

Both “DIRECT MANAGEMENT LLC” and “FREEDOM MANAGEMENT LLC” are registered in Delaware, another jurisdiction infamous for its corporate secrecy. Interestingly, Delaware corporate records reveal that both of these companies were created on the same date: December 18, 2017. The Florida corporate reshuffling started shortly thereafter.

While Lasso’s associates no longer appear on the corporate records, there can be no doubt that the actual owner of the properties remains unchanged. Of the 144 properties owned by the companies in 2017, 10 were sold and 16 still list the original shell company as the owner. For the remaining properties, while the name of the owner changed, the actual owner did not. Here, it is important to clarify that, as is the nature with shell companies, the actual “beneficial owner” of the asset remains entirely secret.

The shell company BRICKELL ONE LLC paid $1.25 million late last fall for a Coral Gables apartment. The Miami-Dade property appraiser assessed the house as worth just $734,894 in 2020. Interestingly, the seller of that home was Miguel Macias, who had purchased the home in January 2016 for $900,000. That raises additional questions. For example, why would a shell company Macias had previously managed then purchase a home from him for well above the apparent market value?

The most significant real estate deal, however, involved DEBLEN USA 1 LLC’s 2017 purchase of the luxury home in Miami. In August 2020, just three years after the purchase, the home was sold for $5 million. Curiously, the shell company provided the buyer with a $2.25 million mortgage. DEBLEN isn’t the only company that has moved into the mortgage business. GLOBAL EQUITY SEVEN LLC, according to Florida records, is currently the lender on seven mortgages totaling $1.2 million. It appears the shell companies have moved from being simply owners of real estate to serving as direct lenders in the state of Florida.

Overall, as can be seen in Table 1 above, we identified 136 properties owned by shell companies associated with Lasso. It is certainly possible there are others that remain hidden. Together, those identified have a current assessed market value of $33 million, according to Miami-Dade and Broward County property records. In addition, currently active shell companies hold the $3.45 million in mortgages.

Though Guillermo Lasso’s name does not appear directly on any of the south Florida corporate or real estate records, the involvement of family members and close business associates, as well as the recent moves toward even greater anonymity, certainly raises questions about the candidate’s involvement. The Florida connections are far from the only questions, however.

Last fall, Arauz’s Union for Hope (UNES) party challenged the legality of Lasso’s candidacy based on legislation implemented following the tax haven referendum in 2017. The updated electoral law prevents anyone who holds assets in a fiscal paradise from presenting themselves as a candidate for public office. The complaint cited a 2017 investigation in Argentina’s Pagina/12 newspaper that documented Lasso’s ties to dozens of shell companies and a Panamanian bank.

In 2017, Lasso admitted that he owned the bank, Banisi S.A. Nevertheless, the CNE rejected the complaint. The bank continues to operate today with both Macias and Touriz listed as directors as well as two of Lasso’s sons. Banisi has capital totaling $60.4 million, according to the Panamanian superintendency of banks.

One thing has not changed since 2017: the media — both international and Ecuadorian — are completely ignoring Lasso’s offshore financial holdings. In April 2017, Ecuador’s state superintendent of information and communication fined seven media outlets $3,750 each for not reporting on the Pagina/12 investigation. In the years since, the current president of Ecuador, Lenín Moreno, has also been implicated in the use of tax havens in the so-called INA Papers scandal. Moreno has denied any wrongdoing. Though Moreno had run against Lasso in 2017, he has appeared to favor the banker over Arauz in 2021.

Disclaimer: Andrés Arauz has been previously employed as a Senior Research Fellow at CEPR.

Jake Johnston is a Senior Research Associate at the Center for Economic and Policy Research in Washington, D.C.