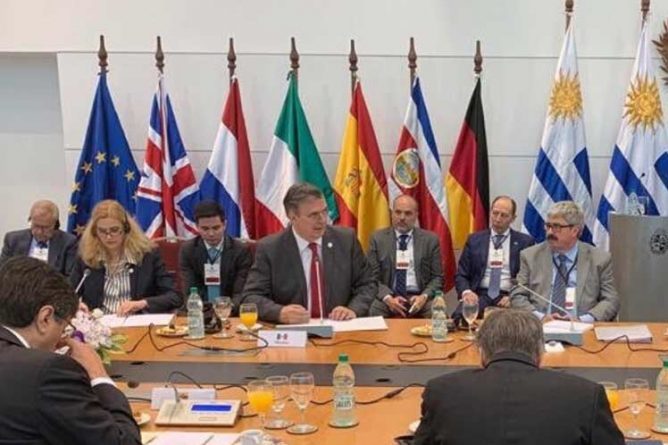 Mexican Foreign Minister Marcelo Ebrard was very clear in expressing in Uruguay that his government did not join the International Contact Group on Venezuela because it rejects any political interference in other countries.

It was in that same South American nation that on January 31, 1962 Mexico maintained a similar position in a memorable meeting of the Organization of American States (OAS), in the sands of Punta del Este, when Cuba was expelled from that inter-American institution.

Less than two years after the events in Punta del Este, at another very similar meeting of foreign ministers in Washington, Mexico was the only country that refused to break relations with the island.

That was 55 years ago; then Ebrard was four years old. Now, at 59 and with only two months in office, he defended in the same Uruguayan setting a position of principles in international politics, very similar to the one that preceded then set in his nation, and that today redeems the current government of Andrés Manuel López Obrador

Consecrated in one of the oldest constitutions in America (dates from 1917), respect for the independence and sovereignty of peoples, non-interference, non-intervention and peaceful resolution of differences, is a mandate of force majeure over governments, governors and the governed, which Ebrard made clear in Montevideo.

Mexico does not join the International Contact Group on Venezuela in calling for elections because it will not participate in anything that determines the electoral process of another nation, and thus revealed, without provoking or polemicizing, the true intentions of little more than twenty nations that pump up an artificial atmosphere magnified by the media in the homeland of Bolivar.

The foreign minister of Mexico insisted on what López Obrador said during the visit of the Spanish Pedro Sanchez to this country to encourage him to abandon his defense of the unconditional dialogue that has just taken shape in Uruguay as the Montevideo Mechanism: “we do not move from there” .

“We support what has to do with that there is communication and dialogue between the parties and that there is a peaceful and democratic solution that excludes the use of force, but we can not participate in anything that implies that we determine the electoral political process”, said Ebrard in a press conference at the end of the meeting with the Europeans in Montevideo.

Actually there were two meetings in the eastern capital. The first was that of the foreign ministers of Mexico and Uruguay, which representatives of the Caribbean Community joined,  and from which emerged the proposal of the Montevideo Mechanism with its four phases of execution if the Venezuelan parties accept the dialogue.

The second, the group sponsored by Spain and two or three other neighboring governments, and bid by the White House to try – as it did 55 years ago with Cuba – to isolate the government of Nicolás Maduro, weaken it, intimidate it, dismantle it, and create the conditions to legalize the coup d’etat in progress with recent and less worn pawns than the leaders of a disbanded, discredited and disunited opposition.

Resorting to several countries of the European Union for such a sad role revealed the precariousness of the plans of the United States, the OAS and the Lima Group, which alone can not achieve their purposes, and that Bolivarian unity is much stronger than the rulers of the White House and their intelligence bodies think.

It also shows that Venezuela is not alone on the continent, that there are many faithful followers of Bolivarian ideas, as shown by the magnificent example of the Caribbean community, and that when you believe in principles such as those defended by Mexico in Uruguay, impunity is difficult and that is a fact.