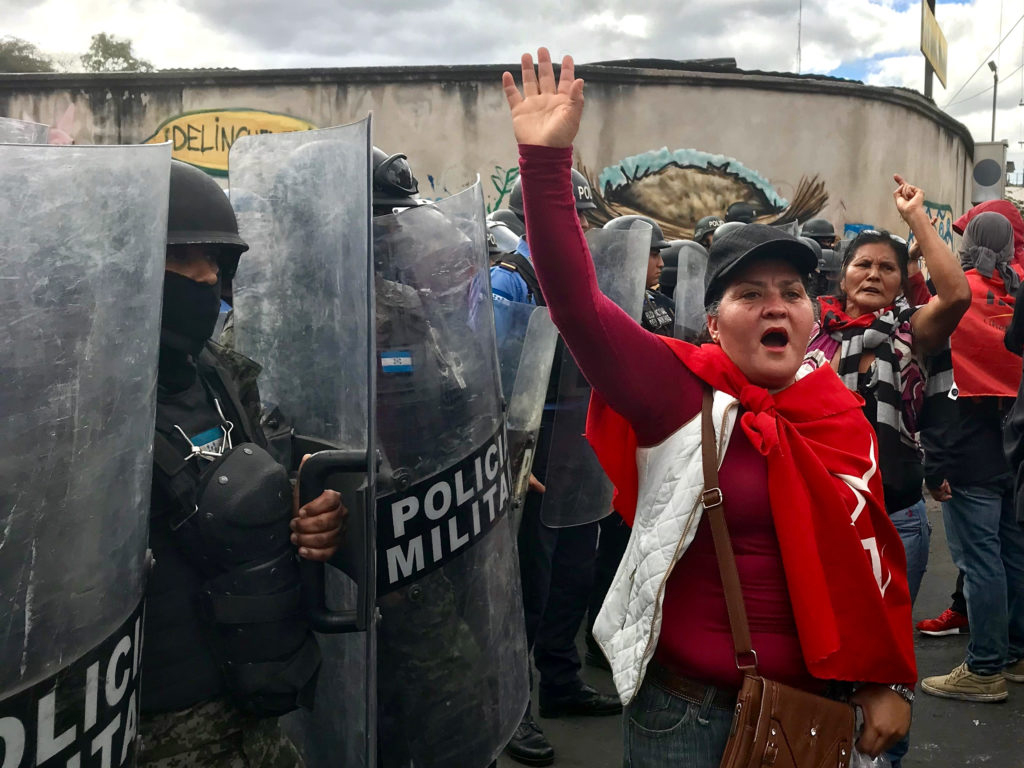 The “honorable mentions” produced in the investigations conducted by the US District Court for the Southern District of New York, which named Honduran de facto President Juan O. Hernandez Alvarado as Co-Conspirator number 4, or CC4, for narco-trafficking activity in the country during the past 17 years, continue to emerge and proliferate in national and international media. The Honduran population’s hope for change has also increased, in proportion to the mounting evidence demonstrating the participation in organized crime by this supreme representative of oligarchic interests in Honduras.

With the current lack of any verified information, we can only speculate with the little information to which we have access, and use the hindsight of history to try to imagine how far US actions may reach against this figure who has been their main ally in the region, and whom they have firmly and decisively supported in consolidating the election frauds and violations of human rights systematically committed against the social and political opposition in the country.

RELATED CONTENT: President of Honduras Under Judicial Investigation in the US for Drug Trafficking

In his statements to the press today, Juan Hernandez himself swore on a version of events in which he tries to position himself as the greatest fighter against narco-trafficking—the same narrative that he uses to portray himself as a victim who has fought against powerful criminals who now accuse him, or “try to involve him” in illegal activity. His story lacks credibility and the facts—such as his brother Juan Antonio Hernandez’s imprisonment in the United States for drug trafficking, and the mysterious accident of his deceased sister Hilda Hernandez—lead us to believe that his tale of innocence is wearing thin and his end is near.

However, faced with these occurrences, one cannot be too optimistic. The end of Juan Hernandez as an individual representative of organized crime, political reactionary ideology, and of the right-wing of Honduras will be an incentive to continue the struggle for the structural transformation of Honduras. It may perhaps provide a starting point from which to continue in that direction, but it will, by no means, be the end of the criminal structure of the oligarchy that controls the country and that receives all the support of the US government.

We have referred to the importance that this year should have, as the 200th anniversary of the first independence efforts in Central America. After freeing ourselves from Spanish colonialism, one of the central problems that we face is that without being able to exercise national sovereignty, and confronted with the power that the forces of giant capital have acquired to control our economy and national politics, the internal forces that oppose the neoliberal model may be insufficient, unless they are able to come together to defeat it, and unless they are able to raise their levels of consciousness and commitment to understand and overcome it.

Returning to history, in this region alone we have the case of Noriega in Panama—the invasion with which Bush Sr. began to show the true face of the “Washington Consensus,” and the invasion with which the deepening of neoliberalism began. The attack became more extreme with the political and military defeat of the opposition forces in Central America, after the heroic fight of our peoples who opposed this neoliberal model that deepens social inequality, concentrating the wealth generated by the work of the masses of men and women into very few hands. On this occasion the empire may take away Juan O. Hernandez or throw him out of power, just as they did with Otto Perez Molina, replacing one presidential figurehead with another to guarantee that the system will not undergo any modification.

Real change will not come without a course of organized struggle by the people of Honduras. This situation marks an important turning point. The enemies of the people have the worst public image in their history—a history that increasingly shows their cruel and cynical nature. But it is also true that this opportunity could be lost if the “damage control” actions coming from the US embassy and their oligarchic instruments in this country can be put into effect faster than the opposition can act.