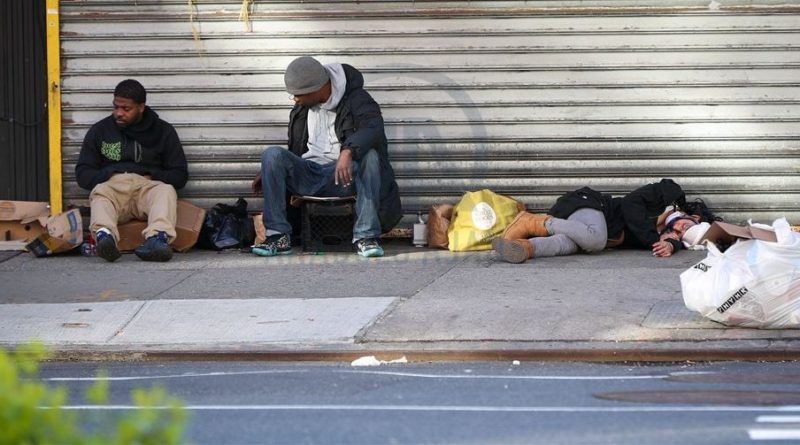 Advocates Call For NYC To Put Empty Hotel Rooms To Use.

Chris was given a test for COVID-19 in the middle of the night.

It was just past 1 a.m., and he entered Lenox Hill Hospital’s emergency room on the Upper East Side with a headache and runny nose. He had been living unsheltered on and off since 2018, passing many nights sleeping in hospital waiting rooms or 24/7 FedEx stores throughout Manhattan. But then early March hit. The city began to close down as the coronavirus spread. His usual resting spots — including Starbucks and Pret a Manger — were closed.

In need of a place to rest and use the bathroom, he entered the Lenox Hill emergency room where he’d taken refuge many nights before. This time, Chris, whose name has been changed to protect his identity, was tested for the coronavirus. Three days later, the results came back positive. The city placed him in an isolated hotel room that night.

That was March 23, when New York City had just begun to see a meteoric rise in COVID-19 cases and none of the city’s at least 70,000 thousand homeless people had yet lost their lives to the virus. Now at least 12 people living in the city’s sprawling, crowded shelter system have died due to COVID-19 infection. At least 239 people in shelters have tested positive.

As the virus spreads, advocates have spent weeks warning the city that without swift action, its homeless population will be hit hard and fast. But the city has so far only offered 500 hotel rooms to New Yorkers who have tested positive for COVID-19. Nearly 400 of those beds are currently full, leaving tens of thousands in shelters and thousands more on the street in increasingly hostile conditions.

The city’s response to the growing crisis its homeless citizens face has so far come piece by piece rather than in sweeping action. Last Friday, facing mounting pressure, the city committed to moving seniors out of group shelter settings and into isolation rooms. On Sunday, City Council Member Stephen Levin and Speaker Corey Johnson called for unsheltered homeless people and those with underlying conditions living in shelters to be moved to self-isolation rooms immediately.

But advocates say even these actions are not enough to prevent mass contagion. Under the rallying cry #HomelessCantStayHome, a network of activists, aid workers and homeless people themselves are pushing the city to use 30,000 of the more than 100,000 empty hotel rooms to immediately house sheltered and unsheltered homeless people.

“All these real hotels are empty,” said Peter Malvan, who after years of living outside was placed in a single room at a shelter two weeks ago. “They still have their security details at the front door but there aren’t people going out or going in. Most people on the street are not going to a shelter because they wouldn’t feel safe. The city needs to utilize what it has.”

RELATED CONTENT: This Absolute Bullshit Would Not Be Possible Without Propaganda

The city has yet to take such bold action or respond directly to the demand that hotel rooms be widely utilized.

“If any New Yorker experiencing homelessness reports any COVID-like symptoms, we stand ready to get them the care they need, whether in hospital or isolation,” Department of Social Services spokesperson Isaac McGinn said in a statement.

All the while, the city has continued policing practices that make it even more difficult for unsheltered New Yorkers to protect themselves from the spread of the virus. The Urban Justice Center’s Safety Net Project reports that NYPD is continuing to regularly clear homeless camps — a routine practice that advocates say explicitly disregards recommendations from the Centers for Disease Control and Prevention that encampments not be displaced unless the people living there are offered safe shelter.

The city’s disagreement hinges mainly on a technicality: they say New York City doesn’t have the type of encampments the CDC is referring to, and that unsheltered homeless people do have another housing option in the shelter system. But many unsheltered people say they would feel even less safe in the shelters, where there are reports of overcrowded and under-sanitized facilities.

Josh Dean, founder of the homeless advocacy group Human.NYC said he first heard sweeps were continuing from a woman living on 33rd Street and 8th Avenue who reported seeing a notice printed by the city advising homeless people living there that their belongings would be cleared.

“The CDC is saying ‘don’t do sweeps’ not just because it’s cruel — and it is cruel — but also because it exacerbates the public health crisis,” Dean said. “That is really, really, really concerning.”

Bushwick resident Arthur Katrina also witnessed a sweep in Brooklyn at the intersection of Myrtle and Broadway Avenues, where a group of up to 12 unhoused people often sleep. Katrina, who lives in an apartment near the intersection, described trying to intervene as a group of sanitation workers, police officers and Department of Homeless Services employees cleared the area and forced the group of homeless people to relocate up the block. By the afternoon, the group had returned to its original location.

“It’s just this ritualistic humiliation where nothing happens,” Katrina said. “The fact that there was no posted notice about coronavirus, no posted notice about health or safety and that even people within the shelter system aren’t getting the facts [about COVID-19], that they still have the resources to post a notice that threatens people with arrest and the disposal of their resources is really telling.”

“I don’t trust that New York City isn’t taking advantage of this moment to further enact violence against people who are already vulnerable and further sterilize and gentrify neighborhoods,” they continued.

The Bushwick sweep happened a day after Mayor Bill de Blasio announced the city would be issuing fines of up to $500 if groups defy social distancing orders. Advocates were quick to point out unsheltered New Yorkers are not able to safely self-isolate.

All the while, unsheltered New Yorkers are reporting it’s harder and harder to find a meal, take a shower or even use the bathroom. Volunteers are keeping food handouts going under increasingly perilous circumstances, while common refuges like restaurants, libraries and rec centers remain closed. Josiah Haken, who distributes hot meals with the private nonprofit NYC Relief, says the number of people he is serving daily has more than doubled, even as he’s cut hours dramatically.

As food lines grow longer and unsheltered people remain on the street, many activists who have pushed the city to improve its homeless services for years say the pandemic is revealing the gaping holes in New York City’s safety net that were already there.

Josh Dean with Human.NYC calls the city’s reliance on private groups like NYC Relief to feed the unhoused in this time of crisis a “huge red flag.” Lynn Lewis with Picture the Homeless said the coronavirus proves what she and other advocates have long declared: housing should be viewed as a human right.

“The inequalities and the nonsense and the absurdity of the city and the country’s response to mass homelessness is already ridiculous,” said Lewis. “It’s already inadequate, it’s already counterproductive. This crisis just makes that worse.”