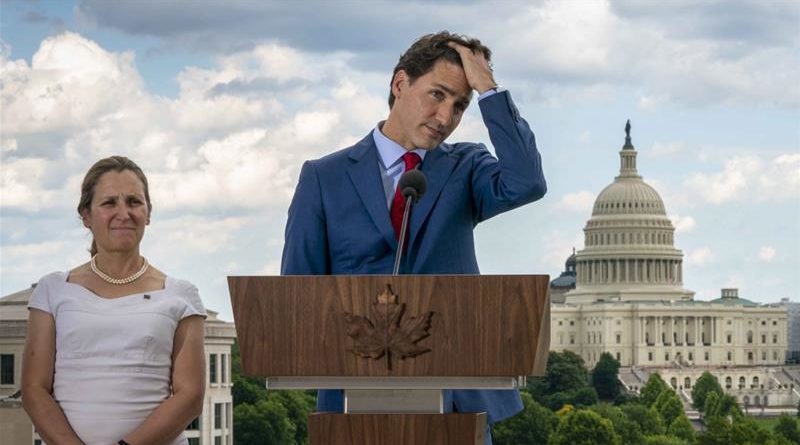 Former Canadian Foreign Affairs Minister and now Deputy Prime Minister Chrystia Freeland has become an internationally recognized practitioner of the soft coup d’État. The sum of her political posturing, actions and interventions raises many red flags. Her recent political machinations appear to indicate that she is bringing her predilections for faraway regime transfigurations to the home front.

Political lore has it that then Liberal Leader Justin Trudeau pursued Chrystia Freeland all the way to New York to convince her to run for the Liberal Party. At the time, Freeland was a well-known journalist with excellent connections inside the American political establishment. She had close links with Lawrence Summers, a senior official of Bill Clinton’s Treasury Department and Obama’s National Economic Council Director. She has a longstanding, deeply anti-Russian bent and a cold war-type worldview.

Justin Trudeau’s 2013 election as Liberal Leader raised serious concerns among America’s ethereal powermongers. Their solution: to seed Chrystia Freeland into the Liberal Party as a Washington Beltway insurance policy, a kind of guardrail against Trudeau’s progressive government policy impulses. No matter the extent to which Trudeau has done their bidding since the beginning of his tenure, they just don’t trust him to fully implement their vision.

Trudeau’s first Foreign Affairs Minister Stéphane Dion sought to improve relations with Russia and endeavored to strengthen cooperation with China including launching negotiations for a free trade deal. He invested heavily in the Asian Development Bank and other Asian economic development instruments as a means of inscribing Canada into the emerging multipolar world. These policy choices drew the ire of many Washington insiders, both Republican and Clintonian Democrat, who see China as a direct threat to US global imperium. Mere months after her nomination to the newly minted Trudeau Cabinet, Freeland was reported to be advocating for a major policy shift in the Canadian government’s foreign policy agenda as well as hankering for the Foreign Affairs job.

Indeed, Phase I of the regime change stratagem fell into place. Although, contrary to what most Canadians believe, Canada has never been a true beacon of human rights, its foreign policies took a dreadful turn. On January 10, 2017, Stéphane Dion was ejected from the Foreign Affairs Ministership and Cabinet and conveniently replaced by Freeland. Canada’s foreign policy was transformed and set on the Trumpian track.

On March 6, 2017, the US embassy in Canada sent a dispatch to Washington entitled “Canada Adopts ‘America First’ Foreign Policy”. Canada became openly antagonistic toward Russia. The dubious arrest of Huawei Vice-President Huang Wei was a natural outcrop of her policy shift. It is quite conceivable that Trudeau did not approve the initial arrest because he may well not have been made aware of it for a few critical hours, until after the deed had been done. Under Freeland’s stewardship, Canada adopted a increasingly warlike stance against all the progressive governments of Latin America. This illegal aggression included intensifying our government’s interference inside Venezuela by financing and actively supporting white supremacist vigilantes who were trying to overthrow its duly elected government.

With the election of Donald Trump, Rust Maidan Chrystia Freeland became hyperactive. She dispatched the Canadian Armed Forces to Latvia to make faces at the Russian soldiers standing on the opposite side of the border fence. She and the defense minister sent our soldiers to Mali to protect Canadian mining operations, help la Mère Patrie France maintain its colonialist hold on the country’s economy as well as preserve the monopoly of French multinationals. This adventure resulted in deepening the divide between the powerful South and its unscrupulous tribal army, on the one hand, and the country’s long-exploited northern Tuareg people (not to be confused with the Boko Haram terrorists), on the other hand.

Rust Maidan Freeland lead the clandestine Lima Group, orchestrated illegal actions against Venezuela and led the deceitful media war, legitimized Trump’s warmongering, verbal effusions and mercenary incursions, imposed sanctions on and reduced financial support to Nicaragua, propped up the Honduran dictatorship with Canadian taxpayers’ money and political cover, nursed the Bolivian Coup d’État and weakened Canada’s support for Cuba by closing the Canadian Consulate in that country. Her actions fed atrocities and democracy-shriveling campaigns in various parts of the world. Simply put, they enabled and legitimized genocides of hundreds of thousands of souls. In our name and without our consent. As for Trudeau, even in those instances when he was pushed or cornered into adopting horrendous policies and actions, the PM must be made to answer for his government’s actions and, of course, for his often enthusiastic and misleading declarations in regards to them.

Presently nestled into the vice prime ministerial chair, Freeland is extending her reach domestically. Her initial political decisions are not reassuring. She blocked Manitoba First Nations’ requests to bring in Cuban doctors to provide badly needed healthcare. She is building a conservative triumvirate with Doug Ford and Jason Kenny. After Andrew Scheer committed the unforgiveable sin of losing the 2019 election, the Conservative Party’s crème de la crème is stuck with an underwhelming leadership candidate field. It is scouring the landscape for alternative solutions, under the watchful eyes of one Stephen Harper.

Let’s remind ourselves that Harper is the Chairman of the International Democrat Union (IDU), an alliance of dozens of prominent rightwing political parties around the world. In short, his job is to strengthen right wing and extremist governments and/or to stimulate the installation of such regimes in countries led by progressives. Harper abhors the fact that a kind of progressive party is in power on his home turf, especially given that is led by a Trudeau. He uses his mantle to harp at the PM from foreign capitals, be it calling out Trudeau from Washington for supposedly resisting the new NAFTA deal or denigrating the PM while visiting India’s political elite. Harper is supported by a stable of ex-journalists and other subservient experts whose full-time mandate is to degrade Trudeau. That said, Harper and his American soulmates desperately need a reliable partner. They may have found one in a heretofore unsuspected place, even if that should involve maneuvering for her to obtain the leadership of the Liberal Party. Because Freeland would do their bidding more efficiently than any available Conservative candidate.

After being blackface-outed, Trudeau was supposed to lose. Of course, we don’t know who orchestrated the leaking of the blackface photos (truly abominable, they were). Were Freeland’s handlers necessarily far-removed from this dynamic given that the photos were revealed in the US media with which she has such enduring links?

Now that the moment for replacing a “weak Trudeau” has seemingly passed, she seems to be mounting a major popularity campaign, on her own or otherwise, activating fawning articles in the Los Angeles Times, the Toronto Star and McLean’s. These masterpieces were reprised by countless other media outlets. They characterize her ascendancy to the PM’s job as being inevitable. This is not happenstance; it is not some spontaneously combustive making of a political icon. It is deliberate and orchestrated.

Unfortunately for the Rust Maidan, COVID-19 is giving the Prime Minister a new lease on life. As he invests hundreds of billions into softening the blow and preserving a survival floor essential for the economy to recover, he is rebuilding his political capital. Every time someone identifies a tranche of people falling through the cracks, Trudeau attempts to bridge the gap. Meanwhile, Conservatives and white extremists, and their US corporate and evangelist backers, are floundering and seeking a pathway to political redemption.

Incidentally, let us not overstate the equity of Trudeau’s policy selections, and certainly not that of most provincial leaders. The poor, the marginalized, women, the racialized communities and the First Nations are bearing the brunt of the present economic cataclysm. A human-rights-abuse level number of institutionalized elderly are paying for COVID with their lives. The poor all over the world will be made to pay, because of their marginalized and thus assigned inferior status. While having guilt falsely heaped upon them for COVID spread because they are forced to work to acquire their daily bread.

The Canadian rich and powerful will generally do quite well as they feverishly fashion opportunities out of the chaos. In the US, this dynamic is much worse; the crypto-rich will siphon off hundreds of billions of the COVID emergency funding. Indeed, we may witness the emergence of the world’s first trillionaire fattened on COVID fumes amid the death or acute suffering of multitudes.

Pushed by corporate heads and the Freeland/Ford/Kenny triumvirate, Trudeau will probably flood the oil fields with billions even though the tarsands’ problem is not foundationally financial. It is caught in a structural dead end, as pressure mounts to switch to more survivable and environmentally sound power sources, and as cheaper sources of oil are developed. The economic case for this is just not there, Mr. Prime Minister. Don’t do it. Don’t let the American investors’ oil lobby, Jason Kenny and Chrystia Freeland push you over the edge.

Will the final leg of the Canadian regime change attempt materialize or will Trudeau squeeze another magical trick out of his boxing mitts? Will COVID-19 kill capitalism in some inequality-fighting fantasy, or will neo-capitalism win the day at great cost to the people? The King is dead. Long live the King. Or Queen? “A very Canadian coup”, smilingly polite in appearance, with the Rust Maidan as flagship. 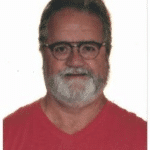