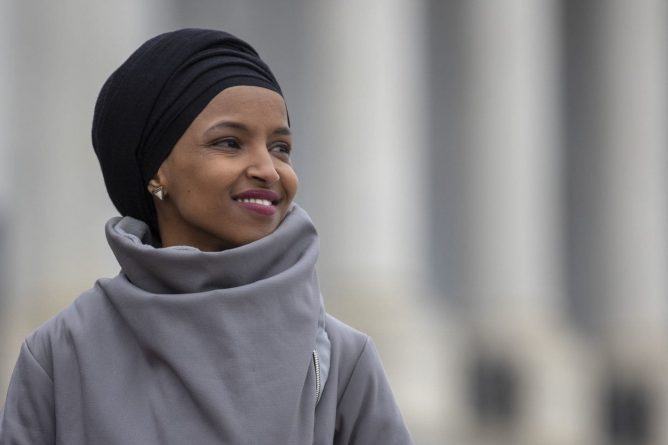 The spirited defense of the freshman congresswoman against unfair attack was the result of years of grassroots organizing. But will it really change the entrenched status quo in Washington?

By Phyllis Bennis
The basic facts of the Ilhan Omar affair were simple, though much of the hysteria seemed to ignore the facts. The new congresswoman talked about the pressure that the pro-Israel lobby puts on members of Congress to show “allegiance to a foreign country.” It wasn’t that different from the mainstream media’s common descriptions of “allegiance to Israel.”
But irate lobby officials demanded that the Democratic House leadership punish Omar for what they falsely claimed was her use of an anti-Semitic slur regarding Jews and dual loyalty—words and meanings that she never spoke or implied. The leadership immediately offered a resolution aimed at condemning Omar. But then the pushback began, from outside activists and from the Congressional Black and Progressive caucuses. Within a week, a broad anti-oppression resolution condemning not only anti-Semitism but white supremacy, racism, and a host of other wrongs—including, for the first time, Islamophobia—had passed overwhelmingly.
RELATED CONTENT: Democrats Put Off Anti-Semitism Resolution After Outpouring of Support for Ilhan Omar
It was a tough week for Omar, but it has to be called a victory for the social movements and members of Congress committed to Palestinian rights; to transparency in political donations; and to a foreign policy based on human rights, international law, and equality rather than unconditional support for a nuclear-armed apartheid state occupying other people’s land.
The discourse shift on Israel-Palestine has been underway for years. It’s visible in the Jewish community, where support for Israel is no longer assumed; in the African-American community, where leading intellectuals are increasingly speaking out on the issue; and in mainstream Protestant churches, where boycotts arising from Israel’s violations of international law are now routine. In the media, the changes are significant, though not as dramatic—the most influential newspapers now frequently publish Palestinian voices and challenge US support for Israel, while social media have broadened the knowledge of Israeli human-rights violations, especially for young people.

But until recently, that discourse shift hadn’t reached inside the Beltway. There, the illusion persisted that Congress’s annual gift of $3.8 billion of our tax money to the Israeli military could not be questioned; that Washington must shield Israeli officials from international accountability for their war crimes; and that criticizing Israel or its US supporters is political suicide. But those days are over.

RELATED CONTENT: End Venezuela Sanctions Says Rep. Ro Khanna and 15 Progressive Democrats
The recent furor led The New York Times and The Wall Street Journal to question AIPAC’s power and expose its influence. It led both the black and progressive caucuses to ask why one of the first two Muslim women in Congress was being attacked when so many other members had made racist, Islamophobic, and other hate-filled statements that were greeted with silence.
This pushback was a victory. But changing an entrenched status quo is difficult; the real test will come when we see how often other members of Congress are willing to speak out against AIPAC and allied lobbies like Christians United for Israel. We may get a hint when the annual AIPAC convention takes over Capitol Hill. Members of Congress will face pressure to applaud Israeli Prime Minister Benjamin Netanyahu and display their allegiance to the US-Israel partnership—even though Israel has just revoked the participation of Arab political parties in the upcoming Knesset elections, and Netanyahu has orchestrated the return to electoral politics of the violence-supporting Jewish Power party, linked to the late American extremist rabbi Meir Kahane.
Four years ago, 58 members of Congress skipped Netanyahu’s speech against the Iran nuclear deal before a Republican-initiated joint session of Congress. That action was mostly led by the Congressional Black Caucus, outraged at Netanyahu’s unprecedented racist snub of President Obama. For a while, it looked like a one-off. But now it’s a whole new world out there. Maybe—just maybe—speaking out against Israeli abuses and refusing to toe the lobby line will start to look like a habit.

Phyllis Bennis is a fellow of the Institute for Policy Studies and serves on the board of Jewish Voice for Peace. Her most recent book is the seventh updated edition of Understanding the Palestinian-Israeli Conflict: A Primer.