During her participation in the forum “Unilateral Coercive Measures: Disrespect for International Law and Grave Human Consequences,” the Vice President of Venezuela Delcy Rodríguez denounced once again unilateral coercive measures and the blocking of Venezuela’s assets as a crime against humanity and against the population. “It is a violation of international law and the charter of the United Nations.”

Rodríguez mentioned that Venezuela ranks fifth among countries with the most sanctions, and second in terms of sanctioned aircraft. In addition, the nation ranks sixth in terms of individuals sanctioned, and third in its number of vessels sanctioned to prevent the sale of oil. For these reasons Rodríguez urged the countries victimized by blockades to unite.

“Unilateral coercive measures are a crime and constitute crimes against humanity, because they systematically and collectively violate human rights, and the people of Venezuela have been victims of this predatory policy,” she highlighted.

In this context, the vice president specified that both the Organization of American States (OAS) and NATO seek to whitewash these coercive and unilateral measures as a group, to disguise them as multilateral measures, but they are not. 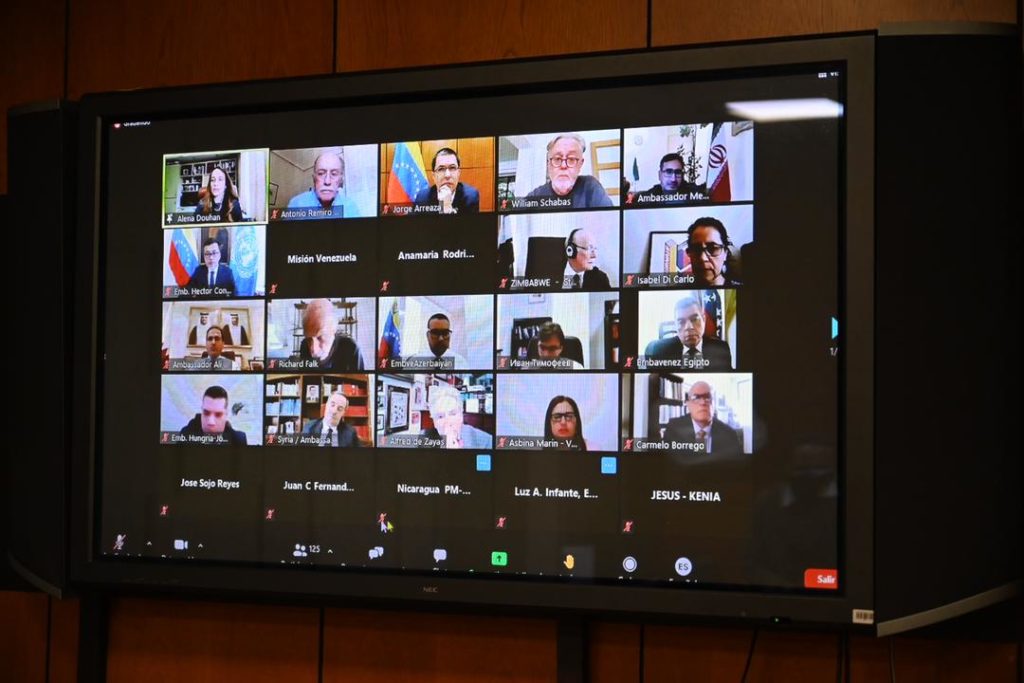 Numbers
The Venezuelan official cited studies made by US economist Mark Weisbrot which showed that Venezuela was deprived, in the last five years, of $100 billion of revenue as a result of the damage done to its oil industry by unilateral measures and the blockade.

“You can see a direct correlation between the application of unilateral coercive measures and the drop in oil production,” Rodríguez stressed. She also highlighted that a country that received, prior to the blockade, $65 billion dollars a year, in 2020 received only $700 million. “There was a 99% fall the income of the country.”

She mentioned that these overwhelming losses have historically only been seen in countries at war, including those affected by World War II. In this sense, she showed how the economic curve describing the fall of Venezuela’s GDP is similar to that of nations that had millions of tons of bombs dropped on them, with a corresponding impact on infrastructure and public service networks.

Rodriguez mentioned the serious effects that countries such as Cuba, Iran, or Syria have experienced, nations that the US has attacked and subjected to “sanctions” and blockades for political objectives, in its attempts to overthrow their governments to further US economic interests.

RELATED CONTENT: US Sanctions Against Venezuela Cause Shortages in Diesel

For these reasons, she insisted on the importance of the blockaded countries forming a union capable of overcoming the economic onslaught through alternative methods.

Blocked COVAX assets
The senior official reported that the COVAX mechanism notified the Government of Venezuela in an official communication, on June 7, that UBS bank blocked and put “under investigation” the last four payments made by Venezuela to complete the financial requirements to access COVID-19 vaccines.

In her opinion, what happened with the UBS bank “is a practical example of what these grotesque and criminal coercive measures mean.” It also revealed, once again, the biased treatment that nations receive as the world community struggles to resolve the COVID-19 pandemic.