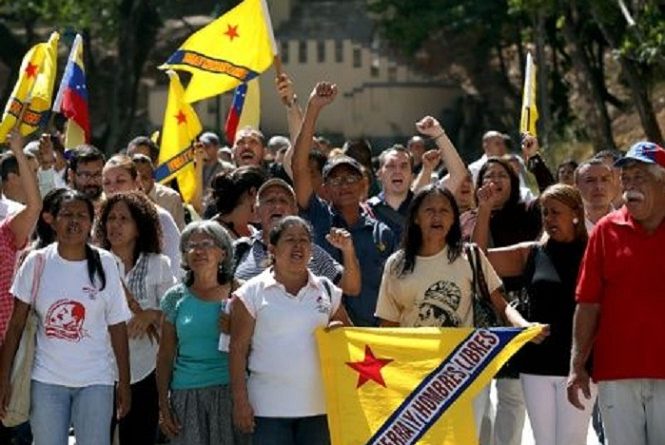 After 24 hours without electrical power and a little more to stabilize the data signal, and when I was in search of news explaining the new (electrical) event, a network publication of Nicolás Maduro Guerra, constituent and son of the President of the Republic, appeared in front of me, where he sympathized with the President of INTI (recently de facto removed after a peasants’ protest) and wrote that “the peasant mafias attack him for being honest and hardworking”. Starting from the fact that it is natural for them to defend their work teammates, after seeing more than once words of praise for Carlos Osorio (former Venezuelan minister famous among Chavistas for his inefficiency) or the economic team, nothing in that sense should surprise us, but we have to highlight something that until a few years ago was the common sense of the Bolivarian government: At another time the people would have been vindicated as the subject of the revolution that assumes their right to protest to deepen it and not one of the bureaucratic operators that assumes the “revolutionary bourgeois” as its center.

That post follows a line that we are observing in other sectors of the government of clear attempts to criminalize the popular struggle that demands coherence with the basic postulates of the Bolivarian revolution to govern with the people, listen to criticism and correct if necessary, adding to the solutions the people’s organization, here the basics of the thought and action of Comandante Chávez.

It is a new sign of what was expressed by various comrades, the contradictions within the revolution are clearly being expressed in terms of class, this complaint puts the accusatory eye on the peasants and not on the practices that seek to consolidate a new land transfer to the private sector, even returning those that the Commander himself delivered.

It is evidence of another method of doing politics, while the peasants, (who are in a picket strike that today turns 28 days old in one of the headquarters of the INTI in Caracas), denounce their enemies with names and surnames, landowners of old seals and new, bureaucrats, both the national or regional executive, as well as the judicial and police institutions, and in response we see this general attack, calling them just as what they denounce: “mafias”.

If Mr. Nicolás Maduro Guerra has any complaint about an actor present at the protest, he should make it in the competent institutions with name and surname, the Chavista people reject all those who assume mafia logics for their actions, so it has denounced the bureaucracy and various political actors who wear red, in many cases accomplices of more than one landowner directly responsible for deaths and despoiling, who act with a high degree of impunity.

It also goes on to say that almost a year after the meeting of various peasants with President Nicolás Maduro, among the militants of the Peasant Struggle Platform, the non-compliance of part of the agreements resulting from that space and, above all, 19 DEAD during the same period, it tells us that there are enough reasons to demand the resignation, not only of the president of INTI, but also of all those who lead the institutions responsible for the area. Actually it should not even be necessary, any honest and hardworking person should have irrevocably tendered their resignation in the face of this situation.

The position of the Bolivarian Revolution, which defends itself against fierce attacks by the empire and its lackeys, which also has the moral and historical obligation to correct mistakes made, cannot respond to the just claim of the people who fight (and also fight for a means to produce the necessary food to advance in this hard situation), with attempts to criminalize the subject who will be called to lead his defense.

At a time when the Peasant Struggle Platform calls for a mobilization in Caracas on August 2 to try a new meeting with President Nicolás Maduro, a year after we saw with pride the result of the Admirable Peasant March, it should be used to present a balance agreed upon between the peasant organization and the National Government, where the scope of the previous agreements is clear, on where progress has been made and where it has not, a minimum exercise of institutional transparency would be not only a necessary political gesture but also a daily form of facing the country.

The fulfillment of these agreements that seek the impulse of production in the hands of organized communities, will also guarantee the peace of Venezuela but above all the survival of Chavismo as a political subject that drives the Bolivarian revolution, socialism, with the people as a vital epicenter.