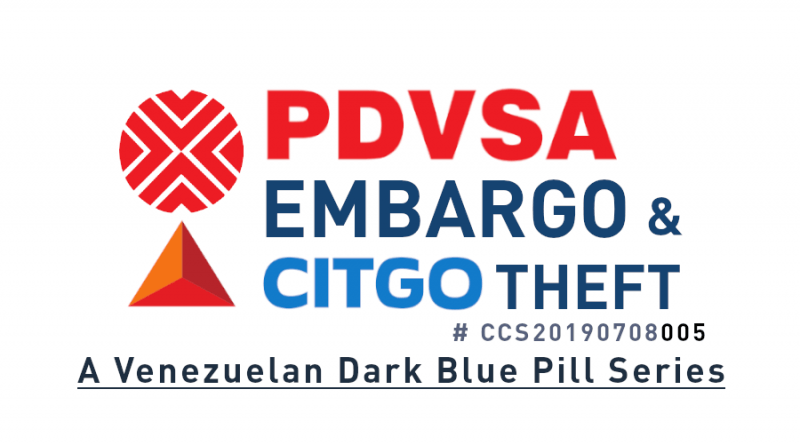 Venezuelan Dark Blue Pill #005
On January 17 1961, during his Farewell Address to the Nation, Dwight Eisenhower alerted to guard against the potential influence of the Military Industrial Complex; little did he know that his warning would not only be utterly ignored, but also two additional comrades would define, benefit from and at times enforce the U.S. Bullying Policy, sorry, I meant the U.S. Foreign Policy after WWII: U.S. Oil Companies and the Global Financing System.

During 30 years, both factions of the U.S. ruling business party subtly exercised control over the Venezuelan state-owned oil and natural gas company PDVSA on behalf of U.S. Interests, until former president Hugo Chávez successfully overcame the 2002–2003 Management Lock-Out, aimed to force him out of office, replaced its entire board of directors and at last took over the helm of the country with the largest proven oil reserves in the world.

Immediately after, not only did the economy recover significantly, but also, as recently stated by the Venezuelan anthropologist and author José Negrón Valera, “… between 2007 and 2011, we experienced a state of social well-being never lived in our modern history”, primarily driven by various social programs, such as a massive housing development program, free health reach out programs, state-own food distribution networks among others, only made possible when Chávez reallocated PDVSA oil earnings, historically shared among the ruling elites, to directly benefit the population.

After the various food-distribution networks such as Mercal, PDVAL and Abastos Bicentenario failed miserably due to internal corruption and mismanagement, the incumbent president Nicolás Maduro launched in 2017, amid severe food shortages, a new program called Local Food Production and Provision Committees or CLAP (acronym in Spanish) which involves organized communities known as Communal Councils in order to shield the new food-distribution network from corrupt officials. Earlier this year when president Maduro strengthened the CLAP program by involving the National Bolivarian Militia to aid with packaging and distribution, the U.S. Government halted 10 of the 12 shipping companies to deliver food for and paid by the Venezuelan Government, as part of their relentless effort to cripple the Venezuelan economy and topple the Bolivarian Government.

And most recently, on top of a Venezuelan Oil Embargo, unilaterally implemented and enforced by the puppet on duty at the White House and his bullying buddies, all CITGO assets were seized by the U.S. Government and handed over to a fake-ambassador of the self-proclaimed buffoon Juan Guaidó, pronounced OneWhiteDog, AKA OneWhiteHouseDog.