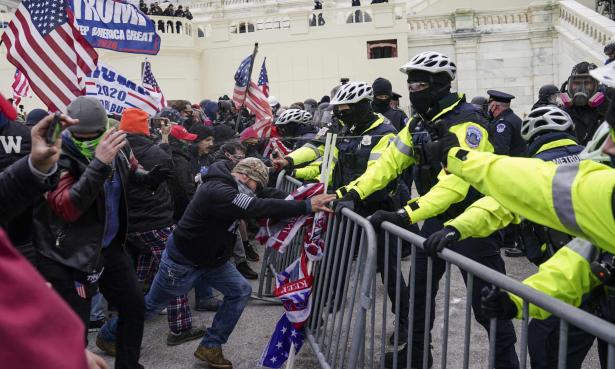 Let’s get one thing out of the way: if the federal police did not want far-right protesters to be inside the Capitol, they would not be inside the Capitol. Last summer the police and National Guard attacked peaceful Black Lives Matter demonstrators who dared get too close to federal buildings. Countless people, including myself, were injured.

Today’s violence, which was incited by President Trump and has seen shots fired and rioters posing at the rostrum in the House of Representatives for cameras, would never have made it past the front door without the acquiescence of federal police. Authorities offered minimal resistance to the mob sent by the president to prevent the counting of electoral votes. With few exceptions, the response has simply been to let the far-right mob pass, to wait and see rather than to prevent the violence and seizure of federal property that is occurring. The state capitol of Kansas has also been ransacked by Trump loyalists.

Today’s maelstrom has left the character of the US state in naked relief. We do not live in a true democracy, and the repressive apparatus of that state does not simply take different approaches to left-wing and right-wing protesters by coincidence. It brutally cracks down on those who threaten the ruling class, and coddles those who don’t.

If the newly confirmed Democratic majority wanted to, they could make this a watershed moment in US politics — a moment where liberals realize that their passivity will only be met with further escalation, and that now is the time to curb the threat of right-wing violence by, among other things, purging the security state of far-right sympathizers, expelling the Republican members of Congress that incited this violence, and working to democratize the economic and political life of the country.

We cannot, however rely, on the very security state that allowed this debacle to resolve it. We should firmly resist efforts to increase police budgets and powers in the name of counter-extremism, given that the police are on the side of the right-wing extremists even posing for selfies with them.

The Senate will eventually reconvene, Joe Biden will be confirmed as the president, and the ransacked Capitol building will eventually be cleared out. But what will remain is the knowledge among elected representatives that they are not safe from right-wing violence, and that a sufficiently motivated crowd of agitated right-wing rioters may be permitted to threaten their safety with minimal resistance from the security state. And without drastic action, that doesn’t bode well for any of us.

Peter Gowan is a member of the steering committee of Metro DC Democratic Socialists of America and the DSA Housing Justice Commission.