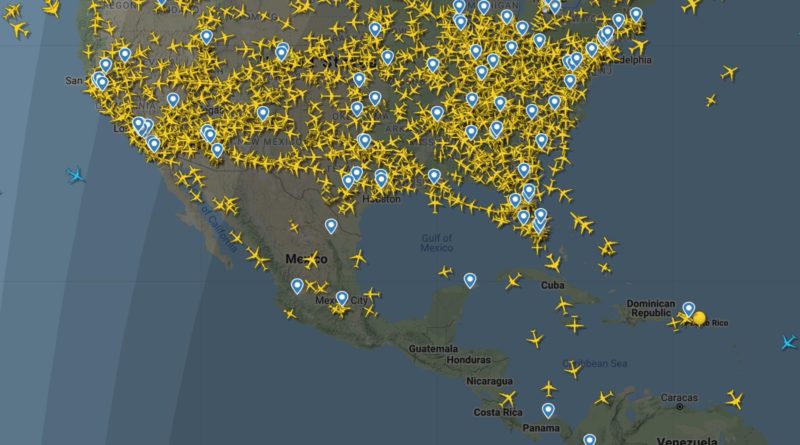 International News
April 9, 2020 orinocotribune coronavirus, COVID-19, epicenter, lack of leadership, Pandemic, the US is a risk to other countries at this time, US decline

Caracas, April 7, 2020 (Orinoco Tribune).- The number of deaths from Covid-19 continues to increase in the United States, and 11,000 total deaths were reported as of Monday, according to the live service RoyLabStats, one of the most accurate and up to date statistical resources worldwide on the pandemic.

The Johns Hopkins University Center for Systems Science and Engineering, an institute that monitors the development of this virus in various countries of the world, with the support of worldometers.info, also showed a similar figure with some lag *and with the difficulties of them spreading disease cases by cities or regions when referencing USA or China.

Worldometers.info also shows a chart (below) picturing the exponential increase of confirmed cases by day. Another important statistical resource online is the Google Covid-19 map, the most relevant featured is that they allow you to see the “per capita” analysis, that means the analysis of cases per 1 million people in each country and region. They are expanding their reach and presenting regional information for some countries.

Below you can see the confirmed cases per 1 million people map, showing very clearly how the epicenter of the pandemic is currently Europe and the US. Even United State’s CDC officials acknowledged a few weeks ago some cases of deceased patients in the US -early this year- that after practicing post mortem Covid-19 tests were found to be positive for Covid-19.

Latin America is another example of that but Venezuela, under the leadership of President Maduro has implemented radical and voluntary quarantine and social distancing measures even before the first case was confirmed and regardless of US sanctions and blockade it has done 14 times more tests than Brazil, 10 times more than Peru and 3 times more than Ecuador, and all the tests are free of charge.

An element distorting available data is the fact that some governments might make up figures in order to cover incompetence or just for lack of resources. In our region Ecuador -at this point- is the country reflecting that fact the most. Disregarding that official data shows 191 deaths today, the Ecuadorian minister of health acknowledged 2 days ago that only in Guayaquil they were estimating 1500 deaths.

In Venezuela, analysts have the impression that the same is happening or is about to happen in Colombia and Brazil which “enjoy” the same quality of leadership and have a weak health system coupled with governments that prioritize profits over people. In that sense the map below, a detail of per capita confirmed cases in Brazil by region, raises alarm among Venezuelans. Going back to the US, Google resources shows an alarming rate of confirmed cases in the States of New York, New Jersey, Louisiana, Massachusetts and Michigan. California and Texas are rare cases of states with high number of deaths but a relative low per-capita ratio. The map below from the same Google service shows an overall picture of the most dramatic rate in the East Cost region. Most analysts will agree that in the US due the lack of leadership shown by President Donald Trump, along with a nonexistent health system due to their market approach to health, are not doing the number of tests required to produce good analysis. At the RoyLabStats YouTube resource we can see (below) a more clear detail by country. There are 11,000 deaths registered in the US at this time but the same service shows also a concerning number of critical cases, 8,879 (see featured image) as an indication that the number of deceased will raise likely raise in the next hours or days.

In this image you can also see Venezuela’s updated figures (up the right column), with 165 confirmed cases, 7 deaths and remarkably 65 recovered cases or, almost 40% of identified cases. RoyLabStats also shows a very relevant map with the pandemic per-capita death rate (death per 1 million population), showing Europe, Iran then USA and Canada as the most stricken areas at this time. Below you will see the total confirmed cases per-capita. Interestingly, there you see in the highest range countries like Iceland, Luxembourg and Switzerland, none of them with a high number of deaths but indeed with a very high number of infections in contrast to their population size. Analysts here might agree that these countries might also be implementing more comprehensive testing campaigns. The next image shows the most important increase of confirmed cases for the day (Monday). There you can see the increase in the cases reported in the USA with 30,384 cases followed in distantly by France, Spain and the United Kingdom. Most statistical resources and even the WHO raise attention to the fact that mortality rate is hard to calculate because of the deficiencies in testing. Considering how relevant it is to have some reference point, Orinoco Tribune took data on confirmed cases and deaths by country from worldometers.info and calculated the percentage of death contrasted with the number of confirmed cases. You can see the results below.

We decided to select the countries most relevant to Venezuela and to this analysis. In the case of Latin American countries, disregarding the cases of Cuba and Venezuela, we invite you to exercise caution in evaluating numbers from those countries due to the inconsistencies refered at the beginning of this piece. There might be multi-faceted causes for a high or low mortality rate, but from the data above is important to highlight that -as for today- the mortality rate in the USA is at a low level (2.96%), although many analysts expect that the death toll will raise exponentially in the coming weeks in that country.

Again, there are different reasons for this mortality rate in each country, in some European countries the age structure of the population might be an important factor as a significant percentage of the population is older than 60 years.

In the case of Venezuela, the result is interesting because Maduro’s government has launch a massive and radical plan to fight the pandemic and provide support and ordering respect for WHO’s protocols even by private hospitals. But one thing that has caught the attention of many Chavistas in Venezuela when authorities report deaths is that most of them are of people who have not reported their symptoms in the Patria system or that have not visited the multiple hospitals or CDI’s providing Covid-19 test for free.

This pandemic, at least in its first stage in each country, most of the time affects wealthy people, people who travel a lot or people that are in contact with foreigners. In that sense some analysts in Venezuela have pointed out that because that strata of the population is usually extremely anti-Chavista, some of the cases of death might be related to people not wanting to report to the government. That is why the massive house by house testing and visiting program launch by President Maduro has become so important.

United States as a Major Focus of Infections

As the above data and statistical analysis shows, the United States of America is currently becoming the epicenter of the Covid-19 pandemic and epidemiological experts point out that the next 3 weeks will evidence that trend in increasing numbers.

In that sense all the efforts made by some countries to contain and “flatten the curve” might go down the drain because of reckless leadership in the United States but also in other allied countries. In Latin America the presidents joining this club with Donal Trump are Jair Bolsonaro (Brazil), Lenin Moreno (Ecuador), Ivan Duque (Colombia) and Sebastian Pinera (Chile).

Most Venezuelans are very worried by the negative influence of the mistakes made in Colombia and Brazil, bordering countries, but also by the effects that Covid-19 catastrophe in the US might have inside that country but also all over the region and the world.

One of the reasons for that alarm is shown in the map below from the Flight radar online service. It is a snapshot of the flights inside the US showing how reckless the measures to fight Covid-19 in the US are. All those flights are vectors for the spreading of the disease in the US. But they also show flights entering and exiting the US — putting other countries and regions at risk as well.

The images below from Marine Traffic 24 also show pictures of the maritime traffic around the US as of today. The green dots represent cargo vessels, the red dots represent tankers, and the blue dots represent passenger ships.

The spreading of the disease among humans is higher in passenger flights but studies have shown the endurance of Covid-19 on surfaces and several news outlets in the US. -when the pandemic epicenter was in China- pointed that out, recommending against buying from Alibaba.com or from China overall. The same principal -on steroids- should apply to buying US merchandise transported by sea (not to mention the cargo that moves by air). Disrupting US trade will have an impact on the global economy and no country is interested in that happening, but measures should be taken by countries to reduce the chances of spreading the disease worldwide.