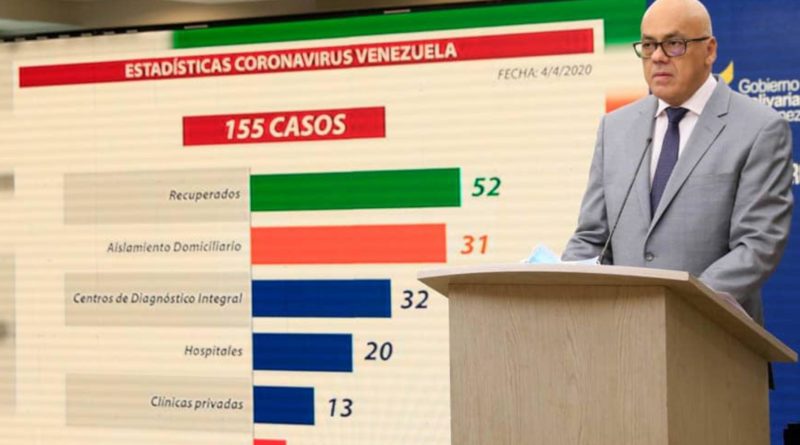 Two new positive cases of Covid-19 were registered in Venezuela in the last 24 hours to raise the number of infections to 155, and 52 patients have recovered satisfactorily.

Speaking on the quality of the Venezuelan approach, the low number of cases detected and the social media negative influencers discrediting Venezuelan figures on the pandemic, Jorge Rodriguez highlighted that Venezuela has practiced 1,227 tests per million people and compared that number with other Latin American countries like Chile with 884, Ecuador with 595, Colombia with 375, Peru with 120 and Brazil with only 86 tests per million. As of this Saturday, 31 cases are kept in home isolation, 32 have been admitted to Comprehensive Diagnostic Centers (CDI), another 20 are admitted to public health system hospitals, 13 are hospitalized in private hospitals, while the death toll remains at 7. He specified that to date, the massive approach has allowed a total of 36,632 rapid tests to be practiced in the national territory, in addition to the thousands of PCR tests carried out for the probative diagnosis of positive cases, as a second step verification process. Showing a slide with the details of confirmed cases day by day, Minister Rodriguez emphasized that there is evidence pointing at a flattening of the infection curve. But simultaneously, he highlighted that the remaining weeks of April are key to evaluate with a higher level of certainty if the radical Venezuelan approach to fight Coronations has been successful. Rodríguez announced that the venues with the highest number of positive cases are: Miranda (58), Capital District (27), Aragua (19), La Guaira (11) and Barinas state with six cases. Jorge Rodriguez asked that public opinion pay attention to the numbers of infections in the young population, especially referring to the ages between 20 and 49, and to avoid believing in trends saying that the virus only attacks old people: to date almost 2 thirds of Venezuelan cases are in that age range. “The numbers in Venezuela are saying something different – that might also be the result of our population age structure,” he said. The minister of Communication also called attention to the latest World Health Organization (WHO) update on Venezuela where the international body highlights as a relevant fact the survey launched by Venezuelan authorities using the Patria system to initiate their massive screening process made house by house. He mentioned that as of today, 17.1 million out of 19.3 million registrants in the Patria system answered the Covid-19 survey, bringing the number of cases with some symptoms to 111,877. Out of that number 92,237 have been visited by an epidemiological team of 13,815 health professionals and the rest are in the process of being visited because the numbers are updated daily. Ending his presentation, Jorge Rodriguez showed the 2 testing machines that President Maduro offered to Colombia as a donation and added that coordination is being made with the Panamerican Health Organization (OPS) to deliver them to the Colombian people and added that President Maduro offered his presidential plane to deliver the machines directly in the case Colombian had problems with jet fuel.