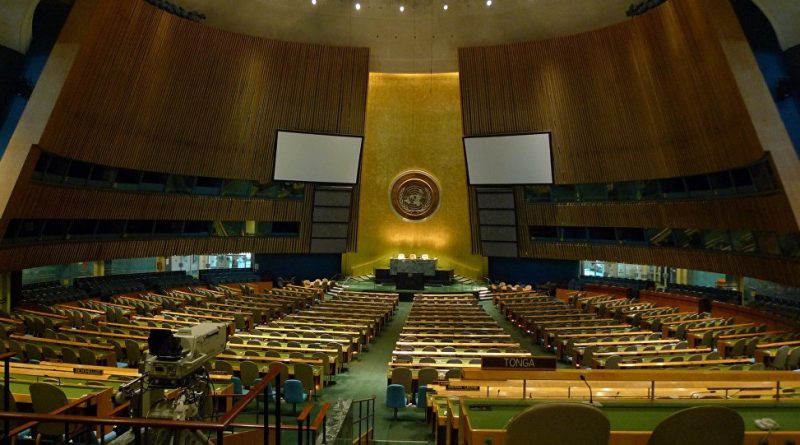 Sputnik’s Marco Terrugi speaks to constitutional lawyer Olga Alvarez about Guaido’s failed efforts to project himself on the world’s stage at the recent UN General Assembly.

The [Guaido-led] Venezuelan opposition is looking to demonstrate that it participated in the United Nations General Assembly [held last week]. Really, their participation was a sham propped up by the media and by the US government. In a conversation with Sputnik, [Venezuelan] constitutional lawyer Olga Alvarez explained the strategy of simulated participation and the actual diplomatic balance of power.

The makeup of the diplomatic siege against Venezuela looked to jump a notch within the framework of the United Nations General Assembly in New York with meetings held by representatives sent by the self-proclaimed [Interim-] President [Juan] Guaido, in a scheme that constitutional lawyer Olga Alvarez calls a “simulation.”

These parallel spaces “can be used by any moderately organized group that requests them and which has money and a relationship with an NGO with consultative status,” she added.

The simulation strategy is supported by the allied media, which report the meetings as if they were happening at the UN without clarifying that they are not on the agenda of the multilateral meeting. Thus the Popular Will and First Justice parties [which dominate the Guaido-led opposition in Venezuela] looked to be presented as the “legitimate government of Venezuela” which is recognized at the main meeting of world diplomacy. The reality is different.

Three actions and an unexpected statement
The first meeting was that of the so-called Lima Group, a space for the coordination of right-wing governments of the Latin American continent and the United States, formed in 2017 with the sole purpose of diplomatically attacking the government of Venezuela.

The group was one of the first shams of diplomatic legality: “It is not a legal institution, it does not exist in international law, it is a club of friends that has the common objective of being an enemy of the Bolivarian government, that is the only thing that binds them,” says Alvarez.

The outcome of that meeting was a repetition of the previous statements, accusations against the Venezuelan government and the announcement of new economic and diplomatic measures to “increase the pressure.”

Elliott Abrams, the US special envoy for Venezuela, was at the meeting. “We [will] keep rolling out additional sanctions to keep the pressure up,” he said, as well as re-emphasizing in most of his statements that “we’re not talking about a military step.”

The second meeting was that of the foreign ministers of the member countries of the Inter-American Treaty of Reciprocal Assistance (TIAR), which “does exist in international law as a treaty prior to the establishment of the Organization of American States (OAS), which lost its validity long ago,” Alvarez analyses.

The TIAR meeting was the most anticipated by the [hard] right which wagers everything on an interventionist solution to the Venezuelan crisis. The treaty’s recent activation on September 9 was a further step in the attempted diplomatic suffocation [of Venezuela] combined with the threat of the use of force.

“The nature of the TIAR is not to attack a country within the continent, [but rather to open] the possibility for compiling lists of alleged terrorists or narco-paramilitaries in order to land defamatory accusations against the national government with the objective, of justifying further aggression against Venezuela,” she observed.

In the signed declaration, different mechanisms were approved to broaden the economic and financial encirclement, as well as allow for potentially dangerous steps in the illegal persecution of Venezuelan [government] officials, particularly through extraditions.

The third meeting was on Wednesday between twelve Latin American presidents, US Secretary of State Mike Pompeo and US President Donald Trump. It had the symbolic weight of the presence of the US head of state and among its results was the approval of a disbursement of US $119 million [destined largely for Guaido’s team].

An unexpected statement occurred amidst these meetings: Lilian Tintori, a member of the national leadership of the Popular Will party, of which Juan Guaido is a member, [and wife of Guaido’s mentor, Leopoldo Lopez,] publicly stated her collaboration with paramilitaries, during the Concordance of the Americas Summit in New York, one of the activities organized on the sidelines of the General Assembly.

RELATED CONTENT: The Latest in the Diplomatic war Against Venezuela

“Our foundation has the ability to have humanitarian hands in every state of our country, and the people who helped us do this are people around the state, irregular groups, and paramilitaries as well,” she said at the meeting. Tintori, who then excused himself in what she described as an error in her handling of English, confirmed what had been revealed [earlier this month] with the photos of Juan Guaido and the paramilitary group Los Rastrojos.

The boundary between sham and reality
Simulation has been the fundamental strategy since January 23 of this year, when Guaido proclaimed himself interim president of Venezuela and was immediately recognized by Trump. While he has never formed a government or wielded power, his recognition as a legitimate president by the United States allowed Washington to justify, for example, the theft of the [Venezuelan state-owned] CITGO oil company.

“There is a simulation game within this war, giving the appearance of legality to [media] performances or organizations, starting with the proclamation of Guaido,” explains Alvarez.

This mechanism has been replicated in diplomatic spaces, such as in the OAS and the TIAR, where the “government” of Guaido was recognized.

“The OAS destroyed itself by committing internal fraud where the regulations were violated, the founding charter was compromised, ending the credibility of the organization,” she went on to add.

Defeat at the UN
The mechanism of simulation has been applied in spaces “controlled by the US that can generate conditions from the simulation”. However, they have failed to transfer this mechanism to the United Nations, where only President is Nicolas Maduro, and those who are present at the General Assembly are the representatives of the government, such as Foreign Minister Jorge Arreaza.

“The government has recognition in the largest multilateral body that exists, the UN, and in the Non-Aligned Movement. There is recognition of Venezuela’s constitutionality and legality, as well as of President Maduro, because he was elected within the framework that establishes the laws,” explains the Venezuelan lawyer.

According to Alvarez, it is not only a victory for Maduro, but for the United Nations, of the countries that are active there. “Today [the US-led attack] is against Venezuela, but tomorrow it may be against any other country which tries to uphold international law and to not to get involved in a situation similar to that of Libya,” she said.

But simulation has its limits because despite projecting an image to present itself as Venezuela’s legitimate government to the world, the opposition’s action took place outside the General Assembly and was only maintained by Washington.

Those who place their wagers on regime change seek to cast their performance in New York as victorious. The real outcome is instead one of little progress, except for more economic support, photographs, statements without further force, and a new mistake that once again demonstrated the relationship between that Venezuelan right and Colombian paramilitaries.