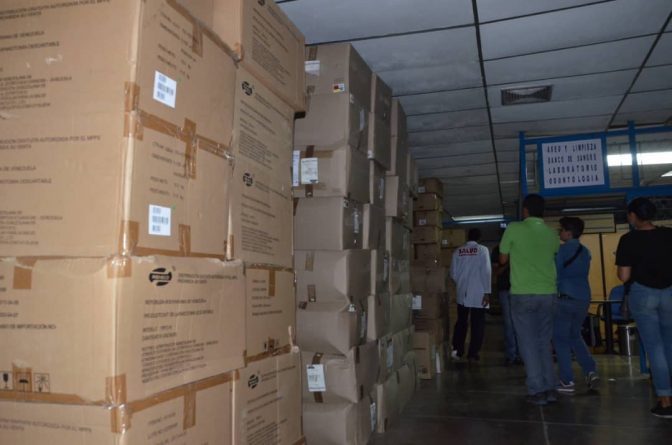 The Political Protector of Táchira State, Freddy Bernal, confirmed Wednesday night from Hospital “Patrocinio Peñuela Ruiz” Hospital in the city of San Cristóbal in Táchira, the discovery of medicines valued at $ 113,980, which were put up for sale illegally and could assist 400 cancer patients. Likewise, hundreds of boxes of medical materials were found, which, according to hospital center workers, were not given to patients but were put up for sale. “We have fired the person who held the position of director of the Social Security Hospital, for the amount of medicines and treatments seized in the warehouses of the health center,” said Bernal.

The website of the newspaper La Nación confirmed on Friday the arrest of Dr. Huber Zambrano Meneses, director of the Pañoncinio Peñuela Ruiz Hospital of the Venezuelan Institute of Social Security (IVSS) in Santa Teresa, for alleged corruption. It was made at the order of the Public Prosecutor’s Office 23. Other officials of that institution were also arrested, including the one in charge of the Hospital’s Pharmacy and two people who remained in the headquarters of the Zone 21 Command of the Bolivarian National Guard. The Nation also reported that officials of the Bolivarian National Guard took and inspected the kiosks located next to the Emergency area, detaining three people.

Bernal requested, on behalf of the people of Tachira, that an effort be made for the wise administration of the medicine so that everyone in need of medical services receives the helping hand of the revolution. He highlighted the fight against corruption and “the doctor who hides medicine from the people is a criminal and must pay with all the weight of the law”. He was emphatic in attending equally to all patients, “when you see something irregular, report it with name and surname,” said Bernal. During the evaluation in the hospital center, Freddy Bernal was accompanied by Amelia Fressel, the sole health authority in the region.

Journalist Madelein García, of Telesur, described Bernal’s outrage at the entire deposits of supplies and medicines that had been discovered. “A corrupt person is as dangerous as an American marine, it is as dangerous as the threats of John Bolton or Donald Trump,” said Bernal.

Journalist García and her team visited the warehouses and found “supplies for at least 6 months”, as well as surgical medical supplies “that are needed for patients without reprieve: gloves, kits for operations, injectors and countless others” .

This is part of Madelein García’s report showing part of what was found.

Garcia also showed another video with bells (equipment) used for chemotherapy treatments, valued at more than 1 million dollars, which had been there for 5 years. “I ask: who should follow up? Where are the people responsible for this?” said the journalist in her tweet.

Dr. Alberto José González is the new director of the National Institute of Social Security in Táchira. He said he was outraged and that he has obtained many supplies in places where they should not be. He told the journalist Madelein García that the now dismissed director did not issue a final report to him, “no one knows where he is and we discovered everything when we made an inspection” .

The journalist García showed the medicines found in the pharmacy area, one of the most critical points, where medicines were found that were always said to be out of stock, “there isn’t any”. They show a drug for cancer patients that, in Colombia, costs $ 3,000. “In Venezuela they are completely free,” but they were taking them to Colombia. They also showed large amounts of ursodeoxycholic acid, which was also said to be missing.

One patient complained that they were denied a medication. A worker said that the doctor in charge, the regent of Pharmacy, Isabel Zambrano, is the only one who can authorize the medicines, and she denied them even to hospital workers. “She always says she is protected by Caracas.”

Dr. Isabel Zambrano denied the accusations; She notes that the drugs are delivered as they arrive, that she is not responsible for the medical supplies, that the insulin just arrived two weeks ago. She had a face to face with the new director, which was recorded in this video.

“There are already people in detention and the investigations are just beginning at the San Cristobal Social Security hospital. They tell us that in the adjacent area there are kiosks that sell medicines and supplies,” García said in another tweet.