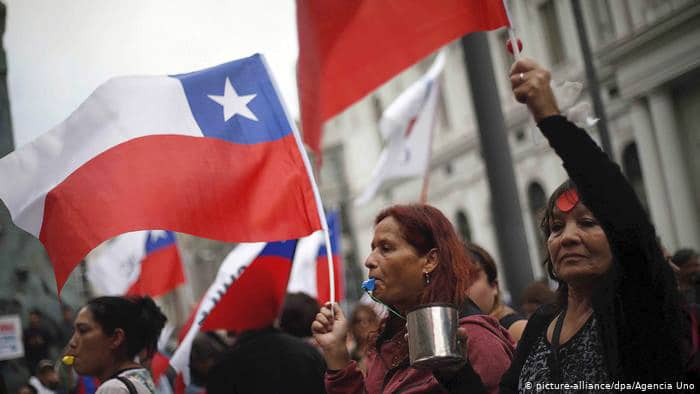 Once the coup in 1973 was finalized, the opposition parties that had collaborated with the coup went to Pinochet, believing that he would support them.  Pinochet was inflexible and told them that this generation would not ever again see elections in Chile and that the electoral registers had just been burnt.  To try to formalize this viewpoint, in 1980 the dictatorship imposed a new constitution in Chile, then fully in a state of siege.

This constitution was reformed several times – 33 times – but it remained in force, particularly in the neoliberal structure linked to privatizations, consistent with maintaining the neoliberal model even after the end of the dictatorship.  It is this constitution that is now coming to an end, according to the majority decision of the Chilean people in the referendum called after a year of the largest people’s mobilizations that Chile has ever seen.

These huge demonstrations began in October 2019.  In November a document was signed proposing that a Constituent Assembly be called together, a process in which the Frente Amplia Party, a principal force in the new left, played a main role.  The new left is characterized by criticism of the conservative nature of the transition from dictatorship to democracy, which has been  marked by the heritage of the Pinochet regime, by the remaining characteristics of the constitution, and by the support of the Convergence – an alliance between the Socialist Party and the Christian Democrats – of the neoliberal economic model.

This proposal encountered resistance, not only from the right, but also from social  movements, as long as the Frente Amplio –  a group of various leftist organizations –  had a fundamental role in the initiative.  The Frente Amplio is headed by the journalist Beatriz Sanchez, who was a candidate for the presidency of Chile in the election of 2017, and who got more than 20% of the vote, almost getting to the second round of the elections.  She thus appeared to be the main leader of the Chilean left.

Beatriz Sanchez was leading the polls, along with Daniel Jadue, the Communist mayor of Recoleta, before the referendum.  She had visited him on the eve of the referendum at the Communist Party headquarters in order to reaffirm the unity between them.  The choice will be between the two of them in a primary, to face Joaquín Lavin, the traditional chief of the right and mayor of Las Condes – rich areas of Santiago – who clearly appears as the conservative alternative, in the election of November 2021.

The Frente Amplio thus emerges from the referendum with a broad area in which to consolidate its forces, especially through the calling together of an exclusively Constituent Assembly, elected in April by popular vote.  This represents the concrete possibility of a radical renewal of the political life of Chile, with the election of a new generation of political representatives; this is even more true since half of the Assembly will be women – an occurrence unique in the world.

The referendum changes much of the Chilean political scene, augmenting the crisis of the traditional parties, those of the right as well as those of the Convergence, and opening spaces for a radical renovation.  The democratization of the political system causes Chile to enter a period extremely favorable to the new left.

A mobilization that began with demands against increases in the metro fares has extended to other demands concerning salaries and employment, until finally it culminated in the proposed policy of the Constituent Assembly, a proposal made some time ago by the new left in the midst of the largest people’s mobilizations and demonstrations that Chile has ever experienced, and which have extended throughout the country.  This new Assembly will draft a new constitution during the course of one year, in the setting of the continuance of these mobilizations and also with a presidential election during this same year.  A new Chile will emerge at the end of this process, in which the new left has achieved the fundamental possibility of making the proposals that they have for Chile a reality.