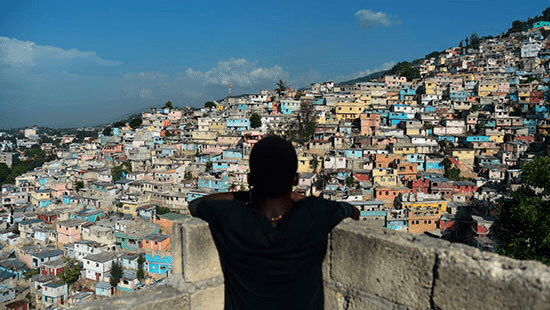 In Haiti there is no oil, only hunger and despair.

And an economic model that enjoys the respect and complicity of those who decide when and where human rights are violated.

Neither solidarity flags nor plaques are raised in social networks despite the suffering of the Haitian people. If the media is silent, reality becomes invisible to those who believe that the essential is always press material.

The official reports speak of dead and wounded, however there are no special coverages or big headlines in the big media. The country is paralyzed. The number of hungry people rises every moment, when already 80 percent of the population crowd its poverty statistics.

Jean Charles, opposition leader of the neoliberal government of Jovenel Moise, has indicated that the protests and the street clashes against the forces of order will continue until the president resigns from the presidency. But Moise does not give in, on the contrary, he has ordered reinforcements to repress the popular uprising. Port-au-Prince, the capital of the country, is on fire. “A government that can not give food and water to its people must resign, but it also needs the bourgeoisie to decide to stop monopolizing all the wealth. In the popular neighborhoods we are more”,  said the Haitians, yesterday,  who have taken the center of the city and demand the presence of the international press. The truth is that neither journalism nor international organizations have given the Haitian crisis the preponderant place it deserves. At the OAS, at the United Nations, in Paris and in Washington, there is concern about the Haitian situation. However, no government of the “rich democracies of the free world” has decided to launch a humanitarian aid action. The axis of concern for these “model democracies” continues to be Venezuela, perhaps because Haiti lacks what usually awakes the Samaritan outburst of countries that point to dictatorships and prop up democracies as if they were natural judges.

In Haiti there is no oil, only hunger and despair. And an economic model that enjoys the respect and complicity of those who decide when and where human rights are violated.